I finished the French boutis bag I’ve been working on all summer and have decided to gift it to my gramma who travels frequently and may need a nice place for her jewelry or such. I was going to drive through the area yesterday on my way down to Living Archaeology Weekend but now I’ve had to bail out on that fun adventure so she won’t be getting it til probably Thanksgiving rather than her birthday but better late than never! If you are anywhere near LAW, I highly recommend making the trip for a fun day out.

Here are some shots of the boutis part after completing the rolled hem. The lining fabric is behind it – I think the colors are so complimentary! 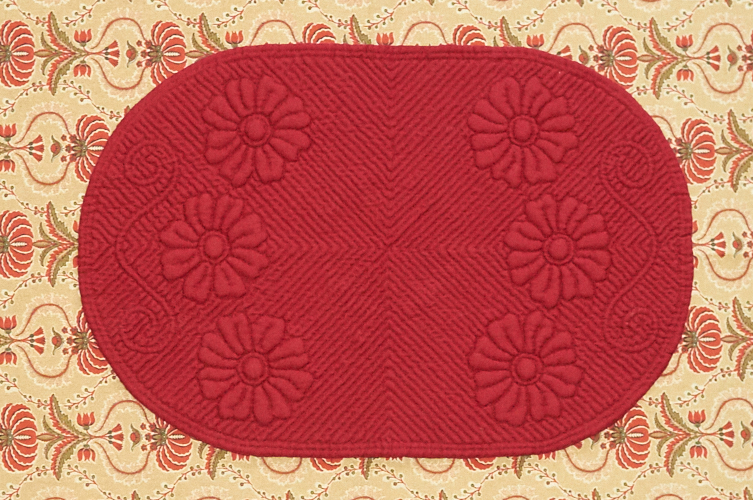 I also want to point out that traditionally, you don’t use knots in French boutis. I did (obviously!) – no one will see them and it still feels uncomfortable to not use them much of the times I try. 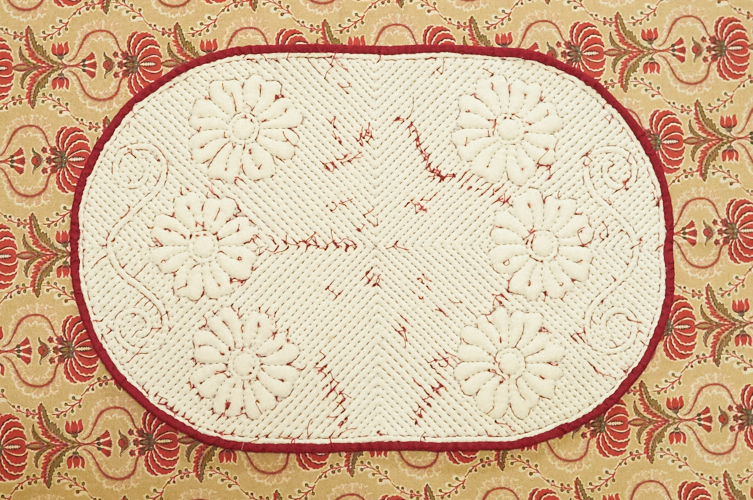 Then I had to carefully size and cut the lining, and I opted to go a little further than the directions said and used a baste stitch to secure the hem. I chose a black thread so I could easily see it to remove it once I was finished attaching it to the boutis. 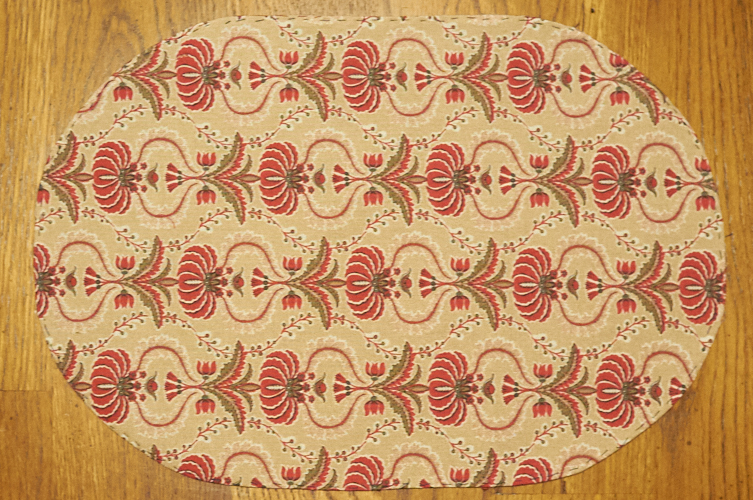 I skipped taking any photos until the end result, but this pattern did not come together like other bag patterns. Instead of sewing the lining to the outer fabric with the zipper wedged between them, this one calls for attaching the zipper first completely to the outer fabric, then attaching the lining using hidden stitches. This could be for many reasons, but what I learned was that I think I like this way better. It resulted in less bagginess of the liner, and though more time consuming, seemed less aggravating than my results using the machine (so yeah, this bag is 99% hand-sewn; only the little zipper tabs were machine-stitched). 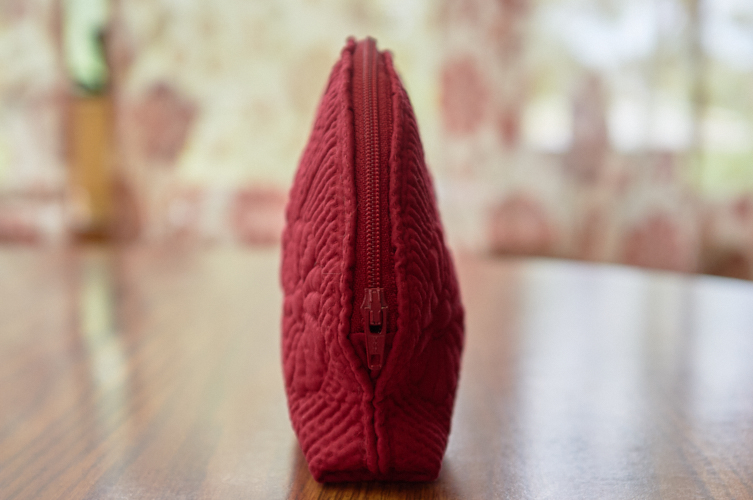 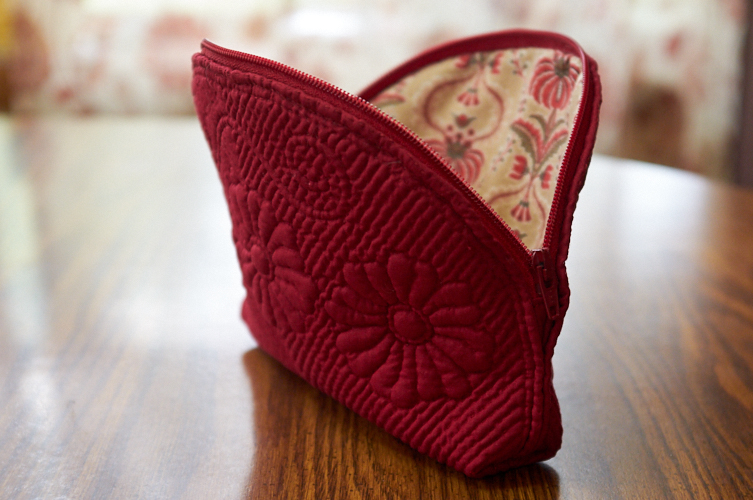 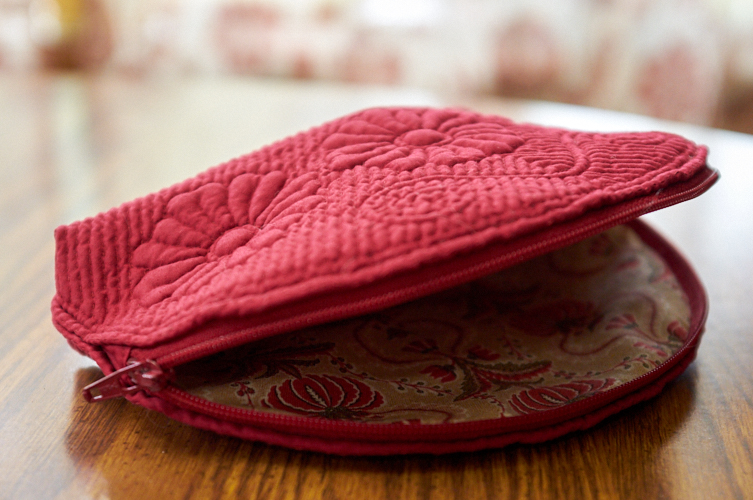 I stitched a little “2018” to the inside of the bag just as a remembrance. I’ve been trying to do that on many of my “first” projects. This bag turned out lovely! I am grateful to having a local embroidery guild that helps me learn new things. 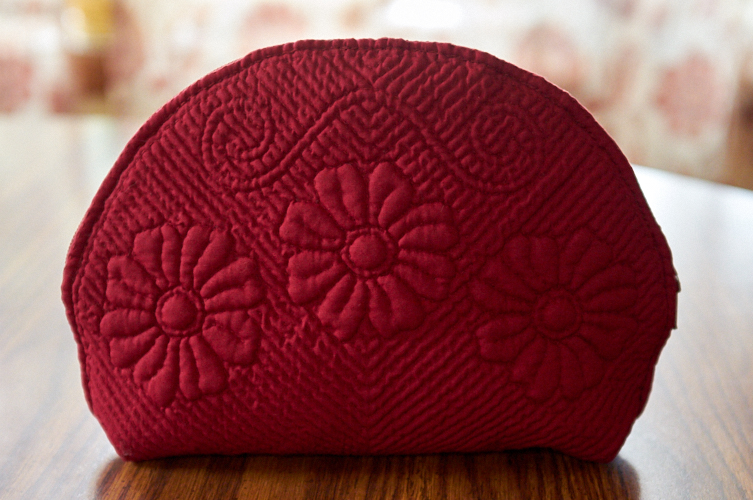 Soooo long ago I mentioned how I owed a post about this bag I made – one I was very proud of! – for my last trip to Peru. 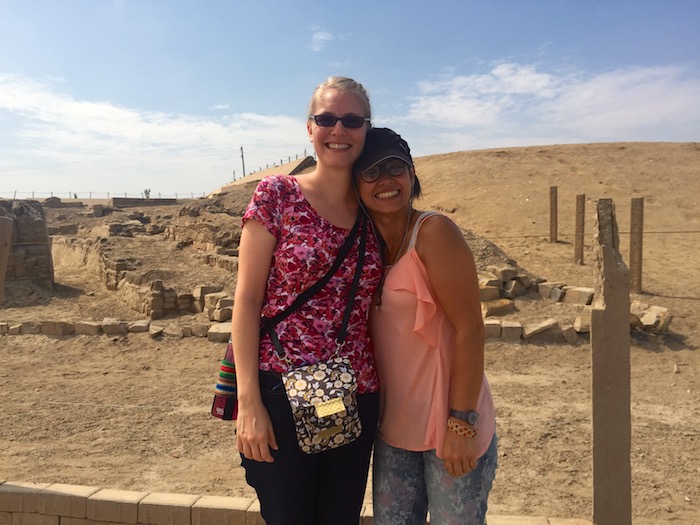 I used the Mending Kit pattern from Michelle patterns and made a few changes here and there to suit my needs. These photos came from after use, so please ignore any use-wear:) Her pattern is brilliant and the result is so very well constructed (I learned about sturdy interfacing options!). I definitely would recommend any of her purchases with the amount of work she put into this pattern. 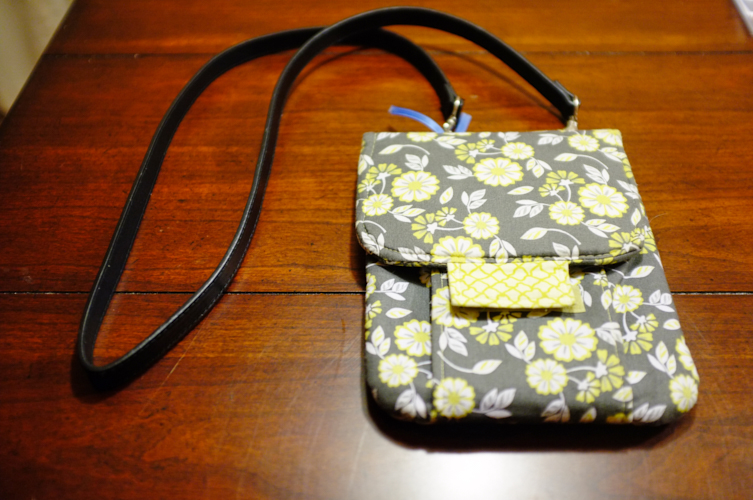 So, the first obvious change I made was that I added a strap. I just went the quick and easy route and purchased a leather purse strap that already had clips, and then sewed two D-rings to the bag with ribbon as best I could. I could use some more experience with the mechanics here, but it suited my purpose just fine! 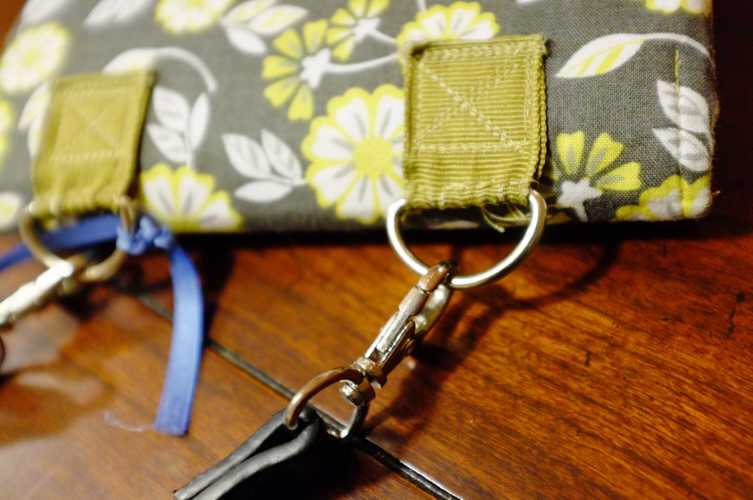 The next change I added was a hidden pocket in the flap, using a velcro closure. In here went a thin pocket tissues with extra money hidden inside. Travel guides warn against Peru’s skilled pickpocketers, and the occasional in-your-face give-me-your-money types. The first time I visited, I was trained to keep a decoy wallet so I had something to offer, but not all of my cash. I figured that if my whole bag wasn’t stolen, the secret pocket might go unnoticed in the event I was mugged, and if not, maybe they wouldn’t search the tissues. Luckily, in all my travels, I have never had a negative experience such as this! But I am also a very “aware” person when I’m out and about, so I might not only be lucky, but actually intentionally avoided by thieves. Who knows! 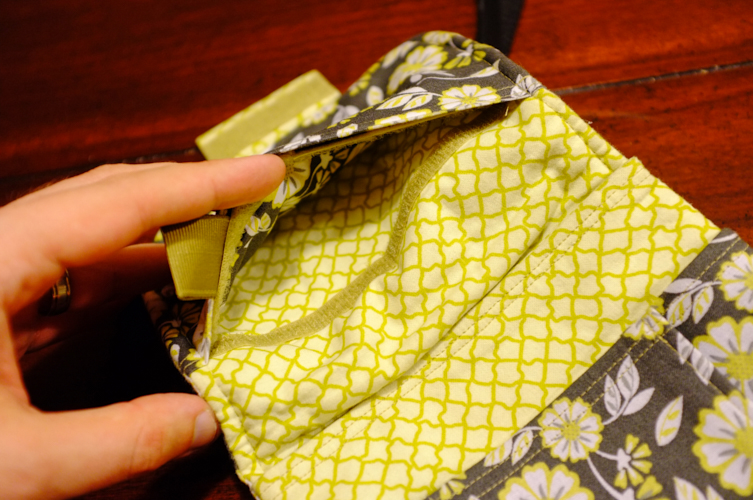 The color choices were new to me. I wanted something more… upscale? Grey was a very popular color at the time, so I found this pretty grey and yellow fabric and then matched it with the interior lining. The little ribbon tab and strap ribbon was actually a salvaged ribbon from some sort of fancy store packaging and the color matched perfectly! The mustardy velcro was something I had in a stash someone gifted me – another bonus match! 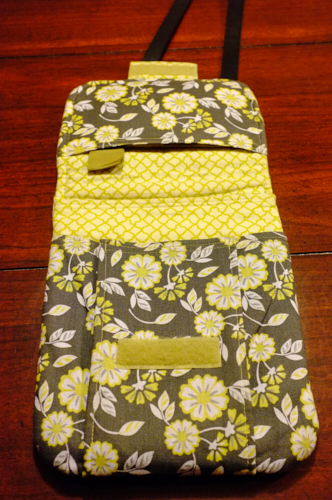 I did not get any good photos of the inside of this bag, but you can see the little pockets over at her site. In them, I stashed bandaids, pepto-bismol tablets (another tip from my previous trip – eat them before every meal and you don’t get sick! At least, to date, this science/superstition has always worked for me!), a copy of my passport, and a travel-sized hand sanitizer. The main pocket that these little pockets are attached to held my kindle and sometimes my passport if I was bringing the real one with me. In front of those little pockets is an expanding catch all for ticket stubs, receipts, maps, purchased trinkets, and so on. 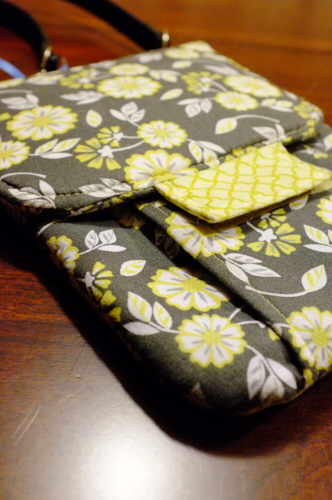 I really loved using this bag, and I soooooo want to make more. In fact, I kinda promised my Peruvian family (Hola Daniella and Ivogen!) I would make them some but then reality came back and I didn’t have enough time. This is back on my priority list, though, so I hope to make some by the end of the year if I can find the right supplies. I’ll keep you posted:D

We are skipping WIP-TAST-ic Wednesdays 22-37 since I was out of town. I did craft all summer, but just here and there and without the stability in schedule to photograph or post. Today is a signal that I am back in some sort of routine (I hope!) and so I’ve chosen a project I am almost done with – a french boutis bag through my embroidery guild, purchased from Averyclaire NeedleArts. I chose to do this project just to learn the technique. I didn’t mind it at first…

I learned that a special brand of regular gel pen works awesome for marking (Pilot Frixion Erasables), and disappears with a touch of an iron. This is cool because you can choose whichever color shows up best on your fabric – and pens mark so much better than pencils! 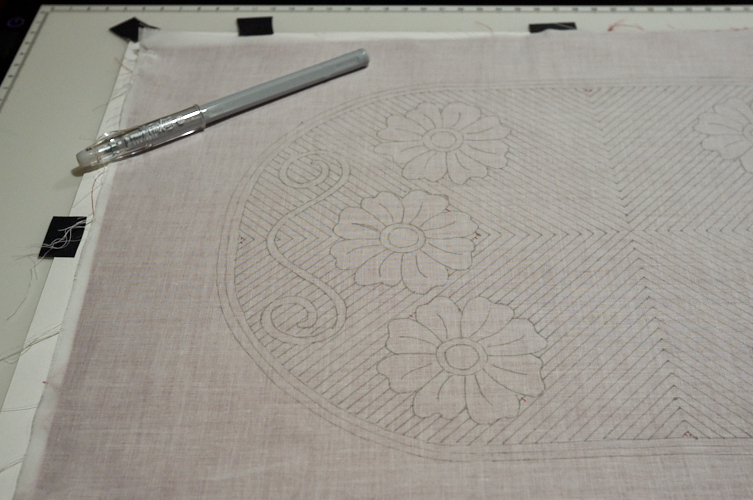 The first thing you do with boutis is sew the “channels” and motifs in a simple running stitch. My stitches could have been better – smaller and closer together, but I know this for next time and I can’t say I wasn’t warned by the teacher, ha! 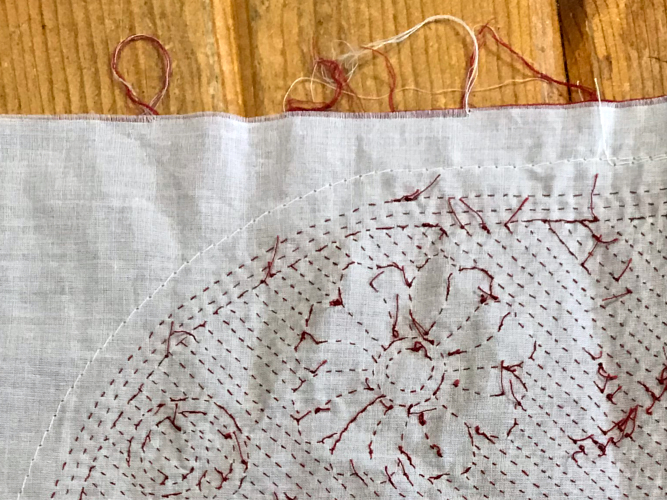 Then you take a needle threaded with yarn and pull it through between the fabric layers in the sewn channels, and side by side in the motif. 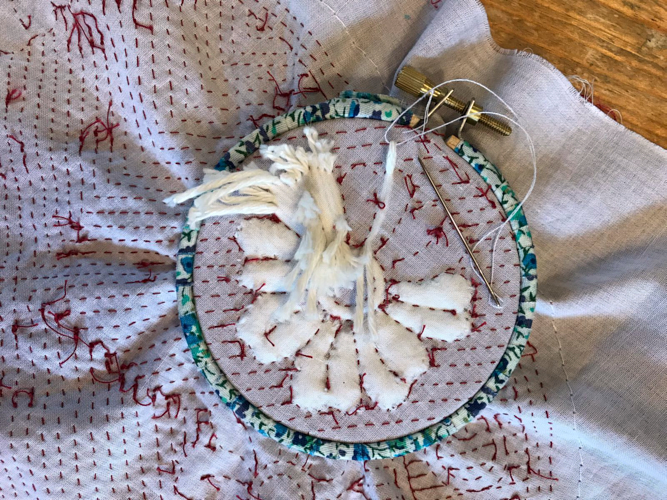 You snip the yarn so its about an eighth of an inch longer than the track. I could have done this better, too. Some of mine were too long, and I thought that it wouldn’t be too much of a deal after finishing the project but there is one specific area where the lumps didn’t disappear and tragically these are all arranged in a circle mimicking the hoop! Augh! 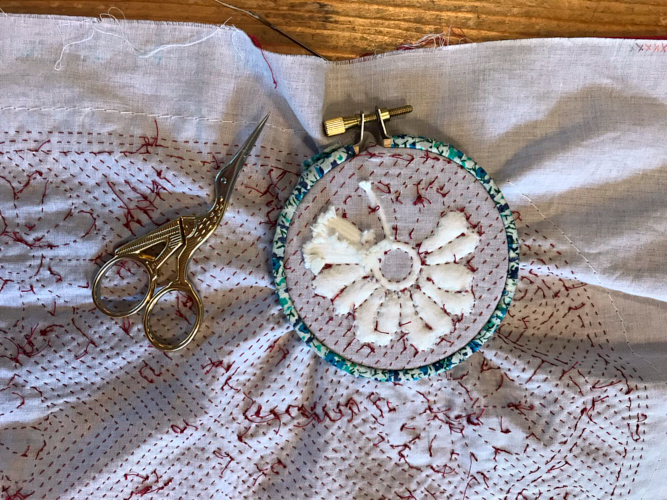 Then you take a toothpick and poke the yarn into the channel, and kind of smoosh it around the very end to fill the space if needed. 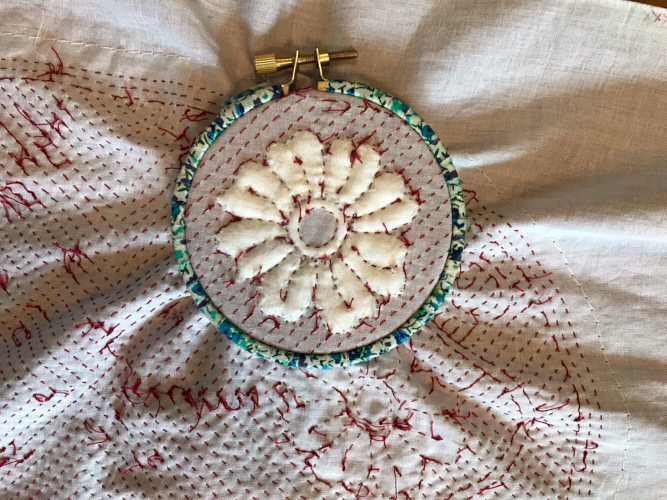 It was at this step in the project that my enthusiasm waned. It was not a favorite task, poking in yarn. I wondered about quitting, actually. Here I was, working on a “big” project for my first go and it was overwhelming to think how long it would take me. Originally, I was making the bag for me, to learn and maybe use on my travels. But then I kept thinking how “pretty” the bag will be and how much time I would have to invest in it, and I realized that it was a special piece, and I couldn’t personally appreciate that specialness. I decided it would be a gift for a particular person, and that re-motivated me. I also discovered that it was a perfect car-passenger project, and just brought it with me every time Boy drove. Soon enough, I had this tedious part finished! 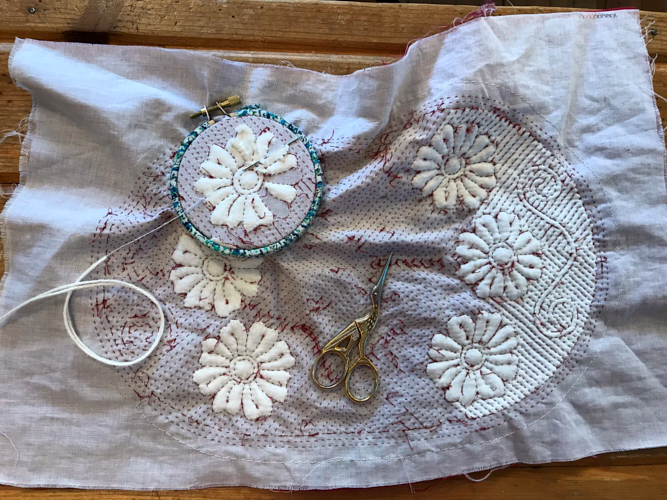 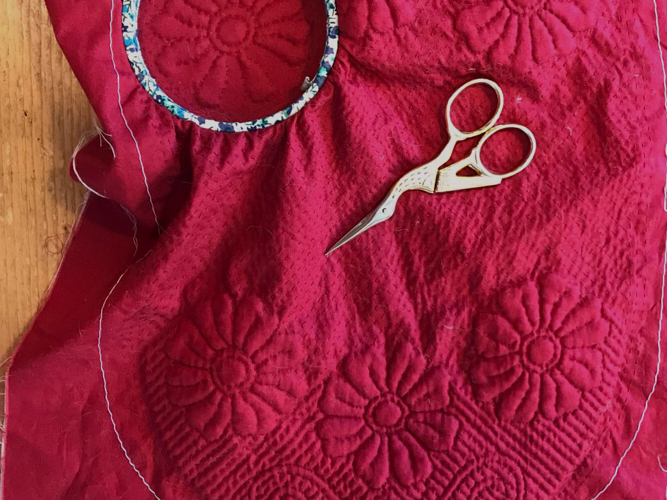 We hosted a Norwegian and Frenchman for a long weekend (Hi Ragnhild and Thomas!) and this meant many late night conversations. I kept my hands as busy as my mind and before I knew it, I was ready to finish up the bag! 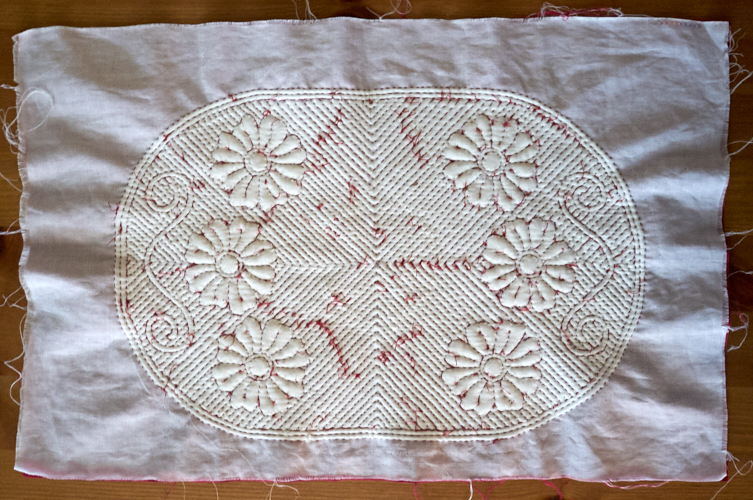 After all the yarn is in place, you soak it in water to help the yarn fibers expand and really fill in everywhere. Then on to the finalizing steps! You can see that disgusting lumpy ring right in the center in this photo: 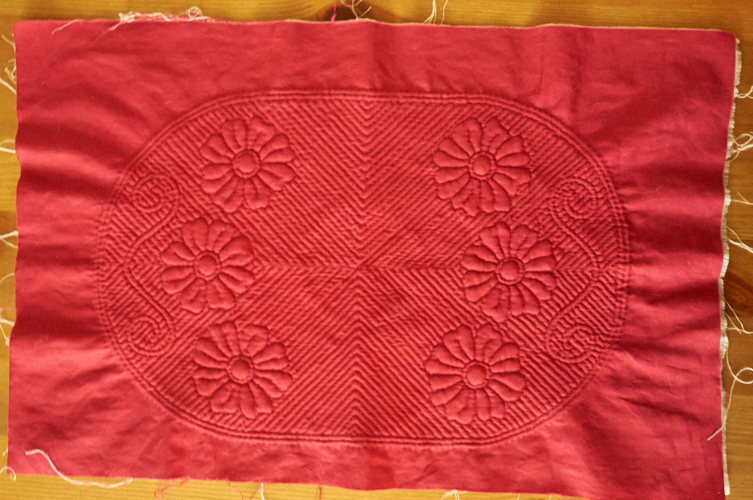 I am confident it will become unnoticed, though. And really, it’s handmade so if anyone has a problem with it, they can go play in the street, as Boy would say! 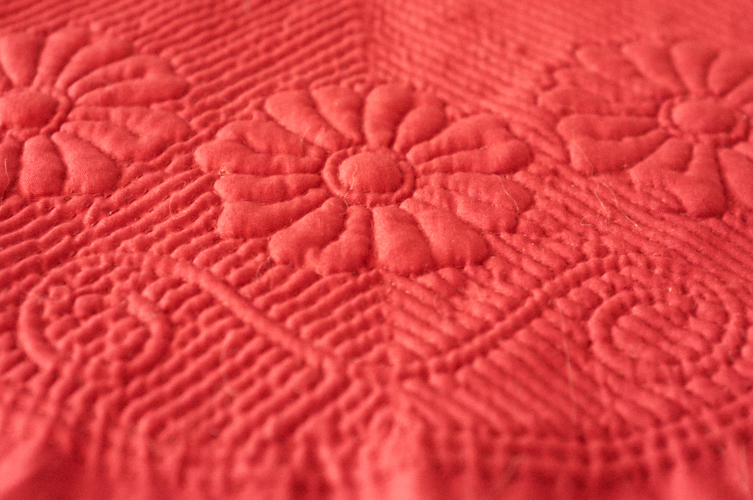 I might never do another full boutis project since I found the stuffing part particularly tedious, but the puffiness intrigues me greatly. I have ideas to incorporate the technique itself in future projects, at least. And for all the beauty of this bag, it is actually such an easy type of sewing – I mean honestly, I don’t see why a child couldn’t pull it off. All you really need is patience! Anyway, I’ve got it trimmed now, and am working on my first “rolled hem”, and then the lining and zipper await! I think I might even make the deadline of getting it done before Someone’s birthday at the end of the month. We shall see.