I am part of the Embroiderer’s Guild of America (EGA) through a local chapter, and I recently came across a little hedgehog-on-a-log piece that Terry Vanderslice designed as an introduction to raised embroidery (also known as stumpwork). I knew I wanted to try it for two reasons: 1) practice with bullion knots and 2) how to turn a bead into an apple! I was all set to try it out, but I wanted to see other variations just for ideas; I came across Margaret’s version over at The Sharp Needler. After studying it, I had the courage to change up this design, too. So instead of a hedgehog, which I have never seen out in the wild, I attempted a possum (or, for you people that are sticklers for mainstream spelling, an opossum). Practice on bullion knots will just have to wait another day. 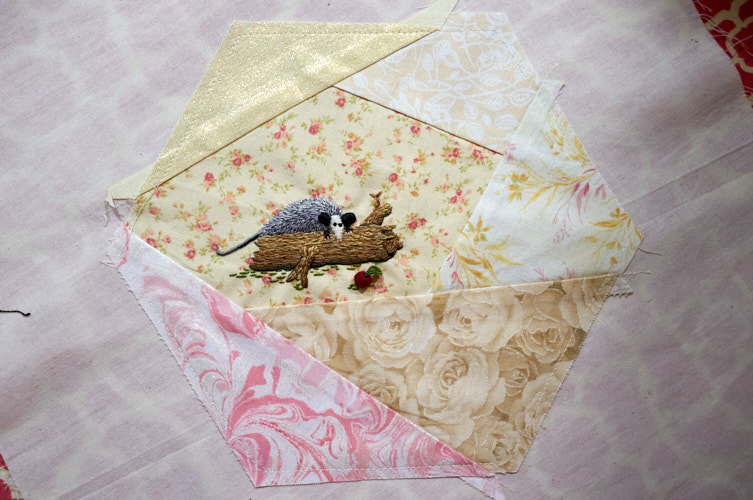 When I was a teenager, my cousin and I found a baby possum and I nursed it back to health. Its mother had been hit by a car and she and the other babies were all dead. My little guy/gal was so teeny that its eyes weren’t even open yet. Back then, the humane society and the local zoo were the only consultants for wild animal rescue, and neither had any advice on what to do. My mom knew someone who had rescued a possum using honey water, so I fed it with an eye dropper. Eventually it opened its eyes and grew enough strength to actually hang from my finger with its tail! My dog let it hang on to him as he walked around, too. It slept in my popple, in a birdcage when I had school to attend. Until one day I came home and it had passed away :( Rest in peace, Baby Speedbump. (And rest in peace, Marbles, the best dog I could ever have had.) 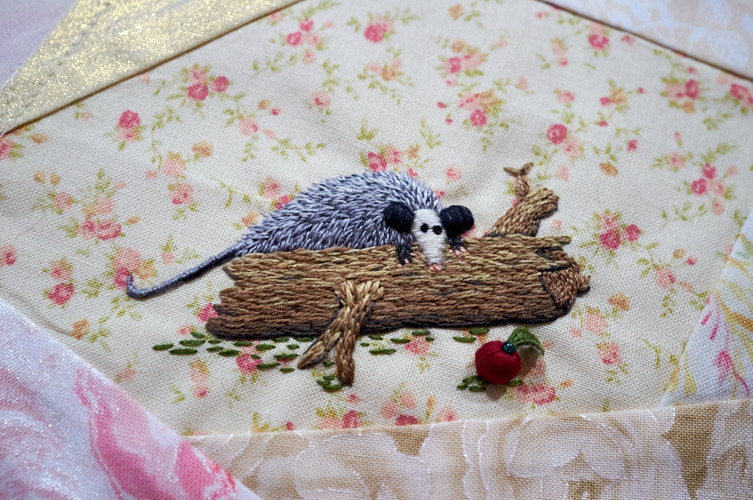 Anyway, as far as this motif, I think I will change it a little more before the end. For one, I don’t like how the eyes turned out. I also need to lighten the coat up a bit, and add more ground maybe to really settle it all together (Margaret’s just looks stunning!). But the bead apple? Super easy. And I got back into using wire to shape leaves (which warmed me up to a more ambitious piece to be seen next time!).