This post was a long time in coming. And when i say long, i mean loooong. She was born in december!!  But I just got word that the gift was received and loved (phew!), so now you can see it.

Her parents chose the “all you need is love” bedding set and painted her room a soft blue with a dab of orange. 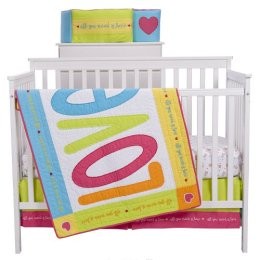 I wanted something to match, so I went with “sherberty” colors. I had started the throw before her birth day, hand embroidering all the hearts and cutting out all the blocks. 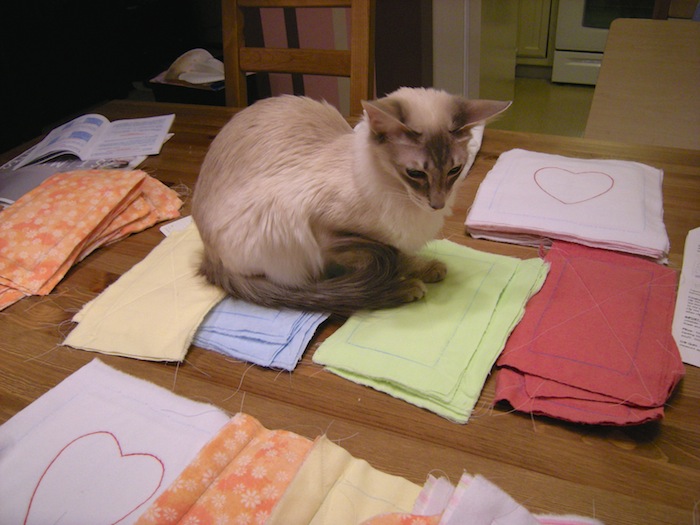 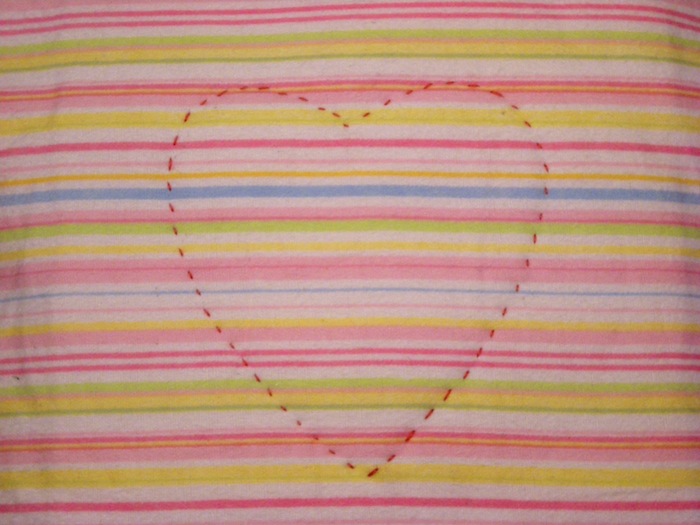 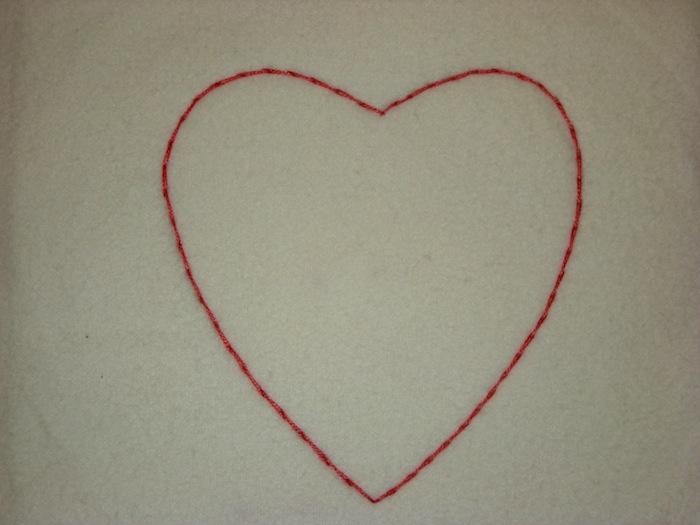 I had even started sewing it together at my psuedo moms house since I didnt have a machine at the time, but, well, my creative mood strikes in the middle of the night so i rarely went over there to complete it.

I had made one of these before, so I pretty much knew what I was doing (one day, Ill post it in Lost Treasures). In theory, it is a simple project. I measured and cut exactly this time, so that my corners would match better. Regardless, I failed at that. (Even after pinning a lot of pins, it still got unequal by the end of the rows.)

I also failed piecing it together in several regards. Lets just say I used my seam ripper almost as often as the sewing machine. There is one piece misplaced, what I like to call a little game for Charlotte and her family to find;) In reality, it was too late by the time i noticed it and i was not going to undo half the quilt.

For the rag look, you go around all the edges and clip them, being careful not to clip a seam. I happened to clip two seams, but no big deal, as I could hand stitch them back together. Right? HA! What I had thought was two seams turned out to be something like 77 seams clipped, because of the way the material was folded to clip, i was clipping farther with the bottom part of the scissors than what i was seeing on top. I sucked it up and re-did almost all the stitching with the machine. Something i like to call super quality with reinforced seams;) 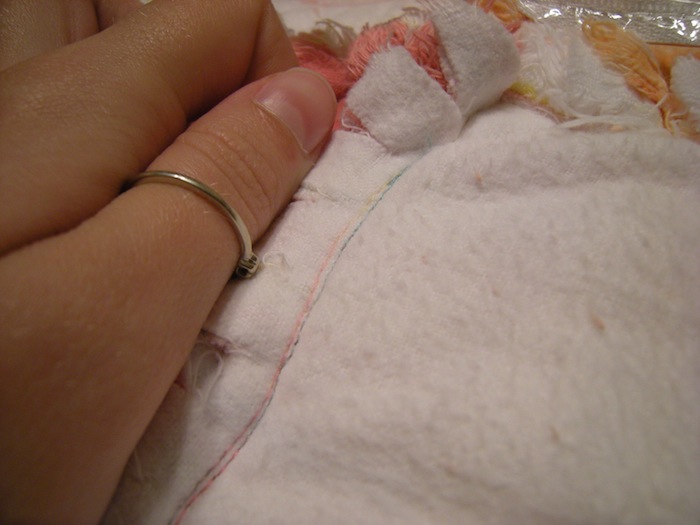 So, I washed it, right? And then like, all these holes appeared. Nothing to do with my clipped seams that I painstakingly corrected. No, I blame it on the sewing machine tension, something I am still learning how to adjust. Some of them were really bad, as you see here: 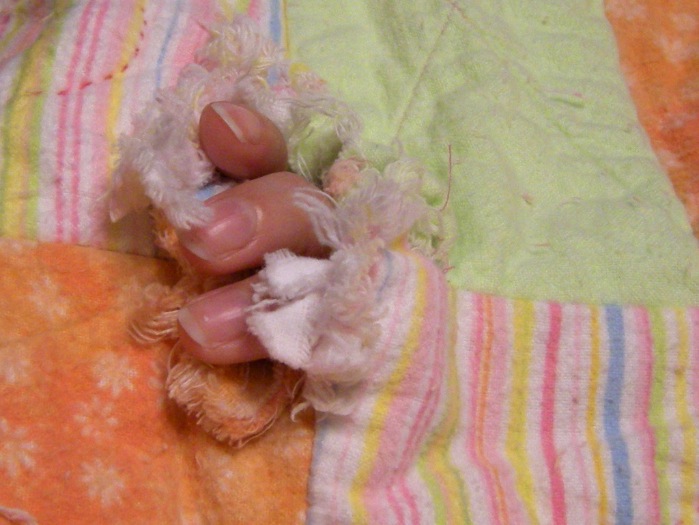 So back to the sewing machine, with newly adjusted tension. Oh, and washing it made all the little lint pieces stick everywhere, so it didnt look as nice and new as it had prior to the washing.

I had needles break, threads snap, and bobbins jam. I ran out of thread at one point. I wanted to truly start all over and burn it in my dumpster, just dont tell Charlotte that. But boy stood by and supported the torture that this gift became. The most upsetting part was that after all that hassle, I just did not want it to fall apart after Charlotte received it and washed it. So when I realized that at every intersection of heart square corners, the seams were loose, I about lost it. But i returned to an old quilter’s trick of tacking with yarn. Although afraid that after one more wash, it would be my luck that the yarn untied itself, I tried to remain undaunted. Thankfully it worked, even if the neat little ties became little white puffs.

Although it is the most problematic project to date, I learned SO MUCH. I learned about sewing machines, needles, tension. I learned how to tackle different problems. Hell, I am an expert seam ripper now! So even though it did not turn out as beautiful as I had envisioned it, I put my love into it and came to grips with its faults and love it. Here is my favorite part, a little something something for personalization (the purple lines are from a fabric marker and has faded). 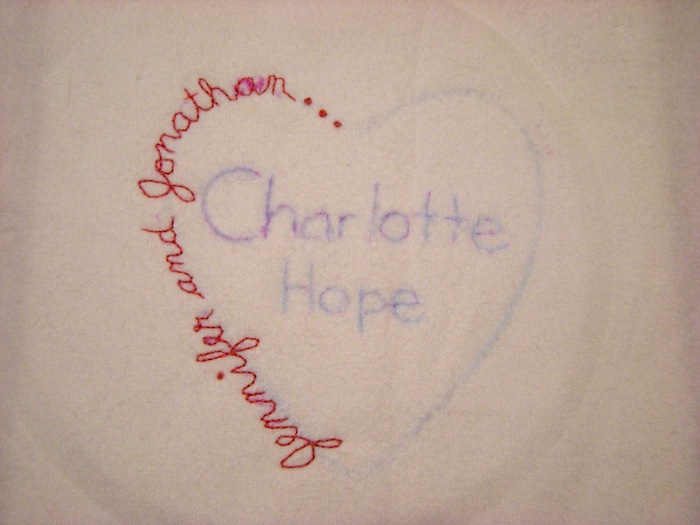 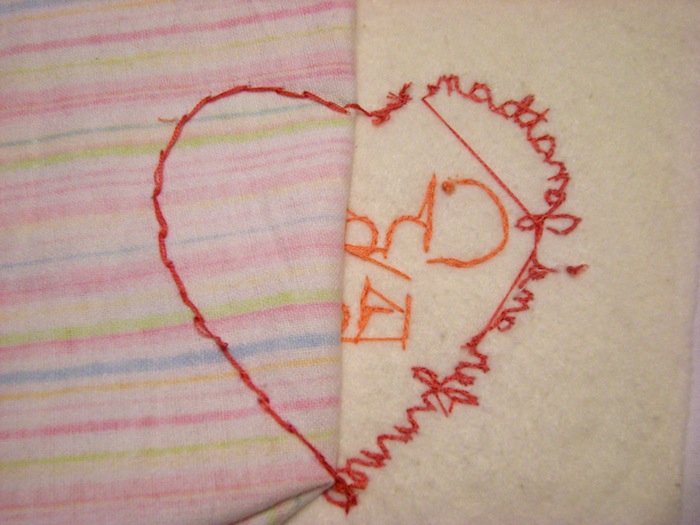 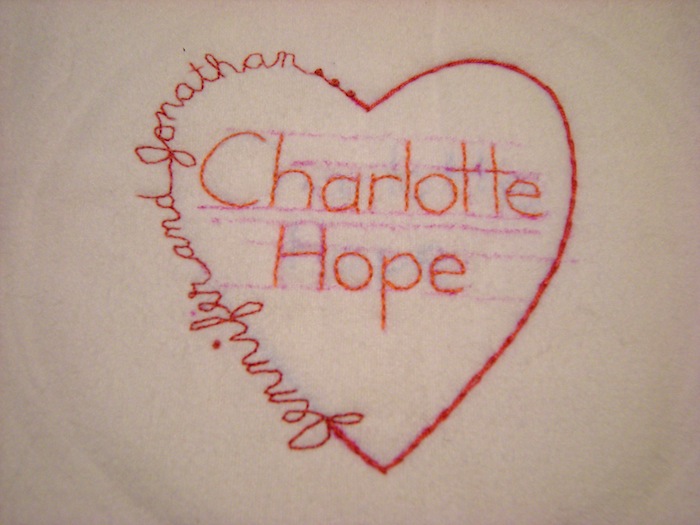 So here it is, in all of its misshapen glory. First, the bottom: 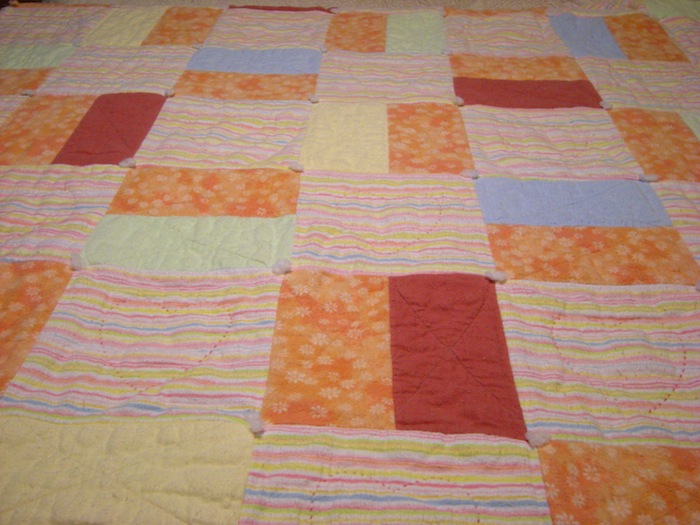 And now the ragged top: 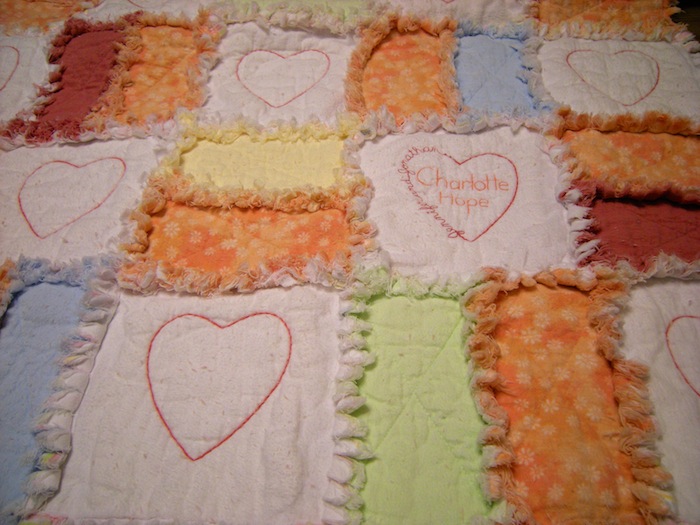