This is the cretan stitch – brand new for me! First up is the front and back. I realized with this one that my backs have improved so much, almost beyond measure since I started embroidering however many moons ago. They would be tidier still if I didn’t use knots, but I use to have so many enormous overlooked knots, overlooked loops, and carrying thread across long distances, and did I mention overlooked loops? Big ones, small ones, all stuck around and causing aggravation later? In short, they were a mess. I’ve finally gained some sort of sixth sense and though my threads still tangle occasionally, they don’t nearly as often, and when they do, I notice 99.9% of the time before continuing on. Phew. 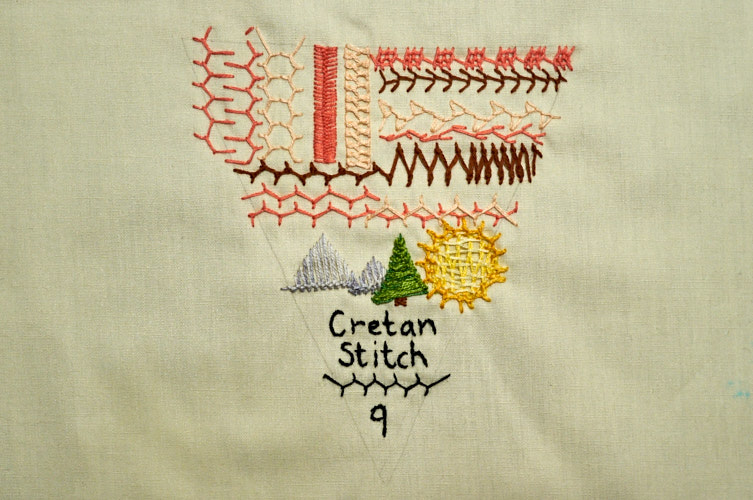 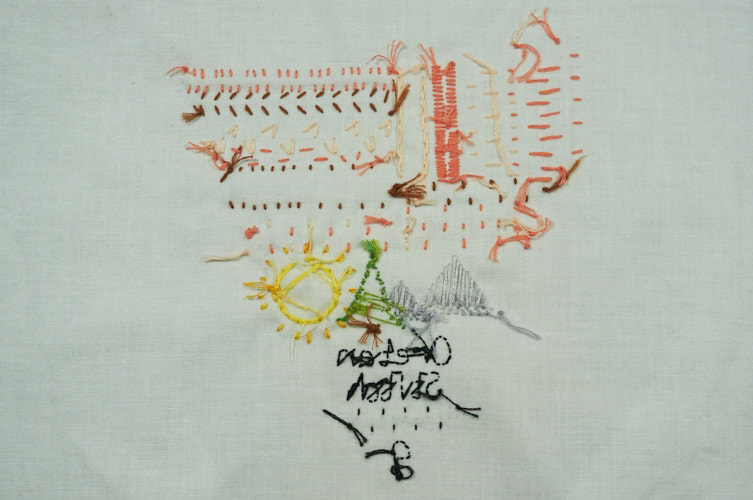 This is a series of four bands. The left-most has two different leg lengths, and are interspaced. The next have equal legs and are set to create a honeycomb look. The third is called a vertical closed cretan stitch, and the last on the right is called a raised cretan stitch. 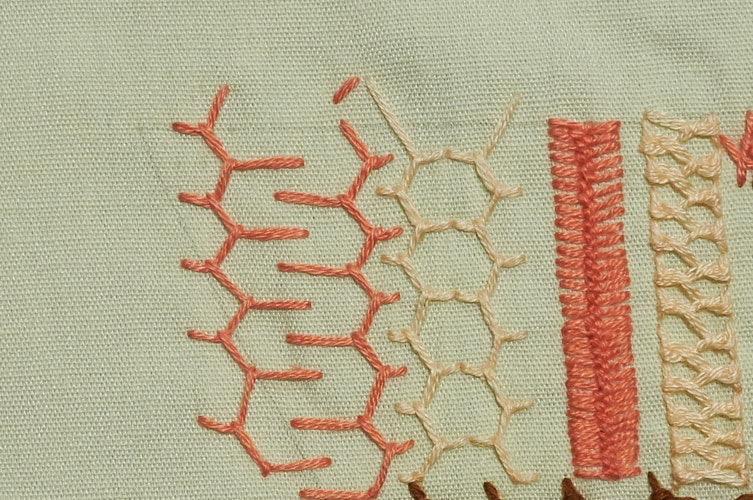 I don’t particularly enjoy how the spacing worked out over here but what I do enjoy is a new favorite of mine! The Scottish cretan stitch at the top is courtesy of Sarah’s Hand Embroidery Tutorials. If I haven’t mentioned her before, it is because I only found her while researching TAST ideas; she is now in my top hits when looking up stitch ideas. I am intrigued at spacing three stitches together and lacing them – what other stitches could this be applied to? I must think on this:) The brown one below the Scottish cretan stitch is a cretan stitch with the needle angled rather than parallel when taking the short stitch. The light coral one is a looped cretan stitch making small triangles; it’s above a coral one showing more of an organic look. Sharon has an example of this on her stitch dictionary page for the Cretan stitch, but either I executed mine incorrectly, or I just don’t understand the difference between this and a feather stitch. I mean, I guess technically based on hand movements, cretan is a type of feather stitch on its own, but it is distinct from the feather stitch in my opinion everywhere else on this sampler except for this particular row.

Here, in brown again, is a knotted band in three different variations: short, tall and spaced, tall and smooshed together. I struggle with this variation a lot, and I need to practice it a heck of a lot more before using it on another project. My knots tend to tighten up before the diagonal thread gets tightened, so it is loose and messy looking. (You’ll see that again on the tree.) Then, in coral are two rows spaced the same and stacked, and then one row interlaced by another color right on top.

For the motif, I chose some mountains (with variable leg lengths to create a triangle), a knotted evergreen tree in two shades of green (though not terribly noticeable), and a circular sun with interwoven raised cretan stitch as filling. The sun looks messier than I would like (as does the tree, even though I admit to cheating and tacking some threads down a bit!), but I was impressed how well it took to a circle. I got the idea from Mary’s shisha embroidery with cretan stitch tutorial. I used a backstitch base though, as I have never done shisha work, and I suspect it may be on our TAST list sometime this year.

And of course, the title, example, and week number. 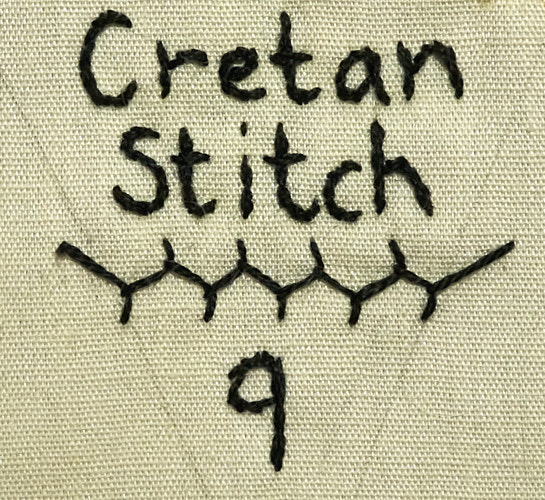 This stitch was a real zinger. I don’t use the sewing method since I prefer to use a tight hoop and I know that is part of it, but I just always had trouble starting each row. I ripped out more stitches on this pennant than all of TAST so far combined. My brain just couldn’t make it work for whatever reason. For example, I always do the black thread part first, so the example stitch went on before the rest of it. Something wasn’t right about it but I figured it was just because it was a new stitch for me. Turns out, after finally getting the stitch right elsewhere, that I had completely done it wrong. If you want to know what I am talking about, Carol has a nice post about it (with a photo of exactly what mine was like which you can see here!) over at Needlework Tips and Techniques.

Next up is couching, and then we get a break to make sure we catch up and stay motivated! I’m still loving it, Sharon. Thanks again! :D