If 2017 became a year of Make, I want 2018 to continue that theme. You already know I signed up for TAST, and plan to keep myself motivated through weekly WIP posts. Last year was the technical side spent mostly on learning someone else’s pattern rather than creating my own. Know where I am going with this? I want to tap into my own creativity a bit more. I am proud with what I have developed on my own thus far, but let’s stretch it a bit more, eh? So, to do that, I’m doing the January Challenge through 64 Million Artists. Each challenge comes with a Do, Think, and a If You Have More Time suggestion. The Do is the direct challenge. The Think asks you to interpret maybe why you’ve chosen to do what you did. And the If You Have More Time invites you to a further challenge or to spread the fun with others (when I have more time, I’ll list it:). I don’t know if I’ll like it, but I’ll break this down in a weekly post for you to follow along!

Day One: Self Awards 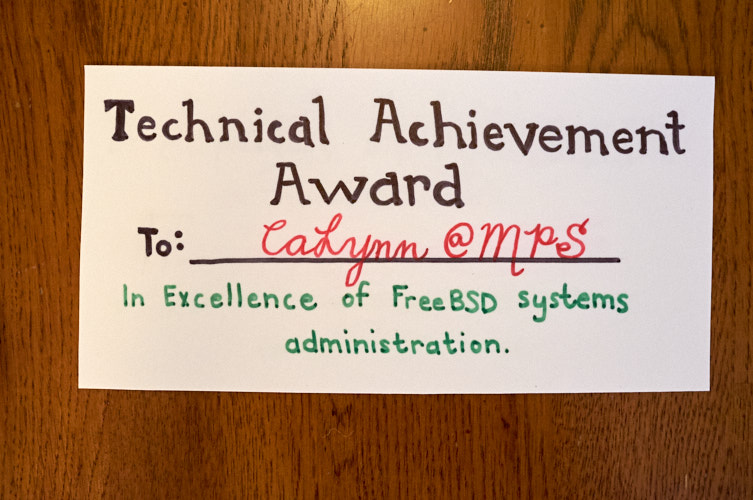 Do: A Technical Achievement Award in Excellence of FreeBSD systems administration – because I work with Boy now and I’m learning FreeBSD so I can haxor my way through the servers.

Think: I picked this because out of a lot of the ideas in my head for 2018, this one is actually a true challenge. I loved programming back as an undergrad but didn’t want to be Boy, stuck in an office pounding away at a keyboard (nor did I enjoy the overt masculinity of my classes). However, he needs some relief at the office so we talked about how I might also (maybe even more so) enjoy sysadmin work. The challenge is that reading technical manuals is sooo not my thing anymore. But how cool would it be to add this to my already rich (albeit stuttered) work history? From pizza to internet to Census Bureau to bank to university professor to elite haxor. Yah! 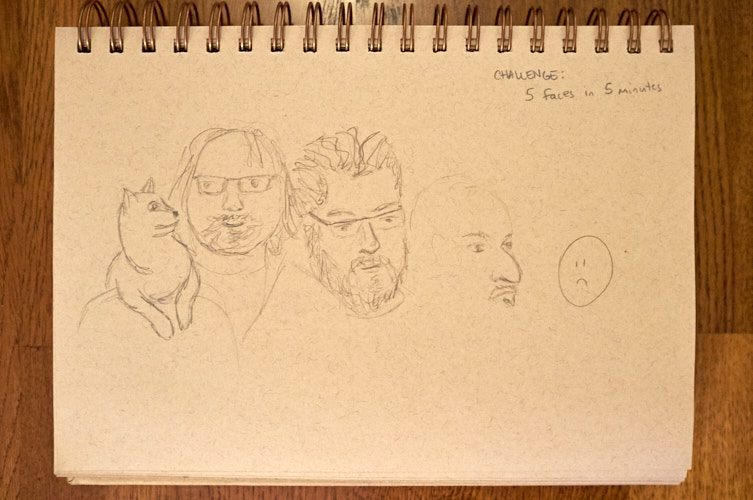 Think: I chose these faces because I need a reference when I draw and had recently deleted everything on my phone so I only had a few photo options (I was at the candy shop without my laptop). They are related though – I see these guys regularly (and of course Sasha daily, that little sweet thing!). I ran out of time, so Tim looks more like a Mike character we know, and then the last face I didn’t get to. Do I like the pressure of a time clock? Yes and no. I liked how it forced me to sketch but I think I might be more of a 5 Faces in 10 Minutes kind of gal.

Day Three: Blurb It Out

Do: A group of friends caught in the between years of child and adulthood naively set off to experience the world. Along the way they meet dangers that forever change them and threaten their relationships as well as their lives. As they grow in age and wisdom through the years, the trials of a nation’s war weigh heavily on them but together they keep the candle of hope and peace alight. An emotional read that will touch the souls of every person willing to travel with them!

Think: Last year I did decide to start writing; not because I want to write a book or anything, but because it is yet another creative outlet I wanted to play with. The above blurb is based on that but I did decide to keep it short and similar to a review in style because, well, I don’t have much written! I know everyone is different, but for me personally what attracts me to a story based on blurb is a hint that there is deep character development. Hopefully you see that in my blurb! 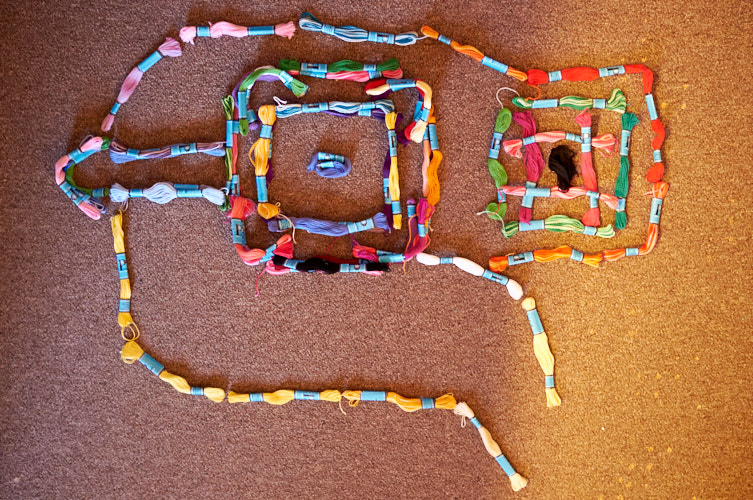 Do: A castle built from crafting threads. Let me walk you through it. It sits on a perch surrounded by woods in the middle of the countryside. You drive up a winding hill and are met with a small but four-turetted elegant castle. An attached parking garage (of the same style) sits on the left; its turret functions as a multi-level work room. You’d move through a butler’s pantry into the kitchen. Each multi-storied turret is a bedroom or library or studio. There is an inner fully-landscaped (with trees!) courtyard with a small pool (I haven’t decided if it is a swimming pool or a garden pool). A stone patio sits outback, connecting the outdoor kitchen (behind the garage) all the way to the secret garden (and labyrinth) on the right. This garden has a special central feature – maybe a tomb to one day lie in rest, or a gnarly old beautiful tree (likely both!).

Think: I was not a fan of doing this one because I don’t like making messes unless it is an accidental part of a bigger project. Rather than getting creative (since I had no intention on keeping my castle), I used what was easily accessible and easy to put back. It was fun daydreaming, though, so I guess the exercise was worth it!

If You Have More Time: The homework was simply just to do the castle and if you had more time, to add surroundings. I think by adding the “scenery” of a wooded hillside and a secret labyrinthy style garden, it counts! 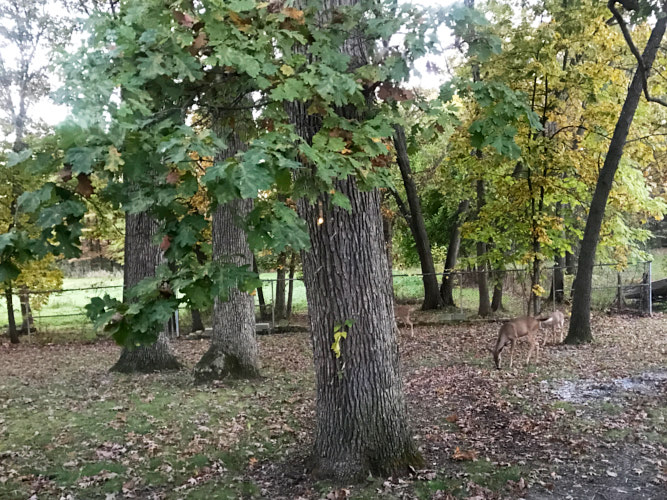 Do: Find a photo I’d include in a time capsule to be opened in 2118, one hundred years from now. I chose a photo of my backyard. Though it is from last year, I see deer regularly back there (often frolicking in the snow which is literally just too stinking cute!).

Think: I chose this because of the secondary question, “what would life be like without it?” and you may gaffaw, but I am not so sure deer will be common here in 100 years (elsewhere, maybe). My backyard looks like I live “in the country” and for this town, I do (*rolls eyes*), but if you were to google map it, you’d see I am surrounded by developments and these aren’t slowing down. Eventually, where will the wild animals live? The ones that don’t adapt well to modern American suburban sprawls? Just think, 100 years ago it was 1918. World War I and the Great Flu Epidemic weren’t just in history books. Cars and planes were just babes. Plastic didn’t exist, people. I mean, do you really think life will be similar to today in 2118? You be cray.

If Your Have More Time: If I had to pick an item to represent 2018 and put in the time capsule, I’d select a tablet that had today’s news articles from all sources pre-loaded, liberal to conservative; mainstream national, obscure local, the whole get-up. I think that while the details between journalists are sometimes up for debate, the overall gist of what gets put in the news says a lot about our world. And in the future, researchers will be able to look back and scour the trends that would allow them to decipher whatever the hell is going on with our current administration and world relations and journalism.

Day Six: Soundtrack Of My Day

Do: Honestly, I rarely listen to music these days. I was hard into the music scene in the 90s (alternative rock mostly, but with some ska and punk thrown in) then I felt like music just took a crap in the 2000s and I stopped caring (so glad it is finally turning around, in my opinion). In grad school I got into solo piano pieces as background music to help occupy my wandering mind while zenning me out of stressful assignments and time-crunches. Then I got into Noisli‘s nature sounds to help get through late nights of creating lectures for class. And then, well, I now appreciate silence and hearing the actual noises of life. I use to be driven mad with my old car when I lost the radio – I couldn’t even do a five minute drive without being super annoyed. Today, I can go hours sometimes without a peep from the station. True story. But, to play along, the soundtrack I would like to hear today is Legend of Zelda’s Breath of the Wild. Unfortunately, Nintendo has let us down by not offering a way to back-up saved data and recently we lost all of our games. Until Nintendo corrects this issue, there is no point starting over because it could just happen again. (Oh! Boy and I did recently attend the Legend of Zelda concert: Symphony of the Goddesses! Loved it!) So instead, the soundtrack will be the music from Psych The Movie, which I am super excited to watch! And the dishwasher, and kitty meows, and sewing machine, Boy’s voice, and that pleasant *pop* you get when you pull thread through fabric in embroidery.

Think: I listen to these types of sounds regularly. My days generally go well – just enough external pressures to get things done without feeling stressed that I don’t have time to work on my own things. Ultimately, this soundtrack reminds me that I feel fortunate to have this privileged lifestyle and I must not take it for granted because one day I am surely to be back in the job market.

I really enjoyed the first two challenges, but the other one’s weren’t stimulating for me personally. I am eager to see what next week brings!