One of the things I’ve done this year is sign up for some creative classes. Craftsy was offering a buy-one-get-one event in January so I enrolled in my first two: Embroidering Texture and Dimension by Hand with Sue Spargo and Stumpwork: Raised Embroidery Essentials with Celeste Chalasani. I like to only work on one major project at a time (otherwise my life would be chaos) so I started with Sue’s but it is still a work-in-progress so I will have to share that with you later.

In the meantime, I found a somewhat local embroidery guild, Needle Artisans of Northwest Indiana, and they happened to have a free cross stitch class at my county library this last weekend so I asked my MIL to go with me (she’s done cross stitch for a good chunk of her life but is interested in what the Guild itself might offer). I have never tried cross stitch because I am self-taught and thought cross stitch might be too… uncompromising? Additionally, a lot of the patterns are boxy and though pixelated images are in vogue now since Minecraft and whatnots, it just isn’t my style. Yet, I do appreciate and adore antique cross stitch, so there’s my conundrum for ya.

I was very pleased with the event! The library had some books set aside related to cross stitch and embroidery. There were two table areas set up; one for members who brought projects to work on during the class (a nice variety!), and one for the class itself. They had several volunteers acting as teachers for us newbies and ran through the basics of needles, threads, cross stitch fabrics, and tricks. There was a third table set up with show-and-tell projects, too, so we could see some finished handiwork.

I was not sure I would learn much other than whether I liked cross stitching (cross stitch seems rather simple and I know about threads and whanot through embroidery) but it is so true you can learn something new every day! I learned three things that is ridiculous I never knew. First, I’ve been separating threads wrong my whole life! I always peeled them apart, like a Twizler pull-n-peel (and mumble at the occasionally knot). Instead, you just grab one, and hold the rest between forefinger and thumb as you gently pull. Duh! The other thing I learned is that the thread brand I use most, DMC, tags one of the paper loops with a handy little symbol (pun intended!) so you know which end to pull from so as to avoid knotting it up. And last, I don’t need to make knots, because I can just capture the tails under my other stitches. Why did I not know these things?!

The guild provided us printed directions, fabric, thread, tapestry needle and wooden needle case, and a baggie to take it all home in (each table also had scissors and a metal needle threader for us to borrow). We began learning with this tiny little “I like you” balloon image which I adore because it is something Boy and I often say to each other. 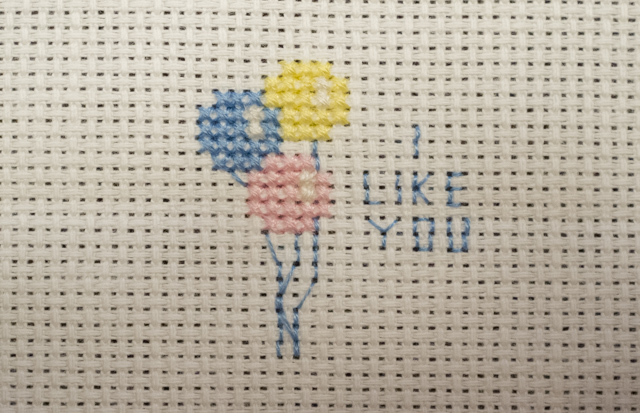 We were given a choice of needle book size, small or large, for a bunny pattern. I picked the large one to get more practice since the smaller one would not fit the border. I am working on it now. 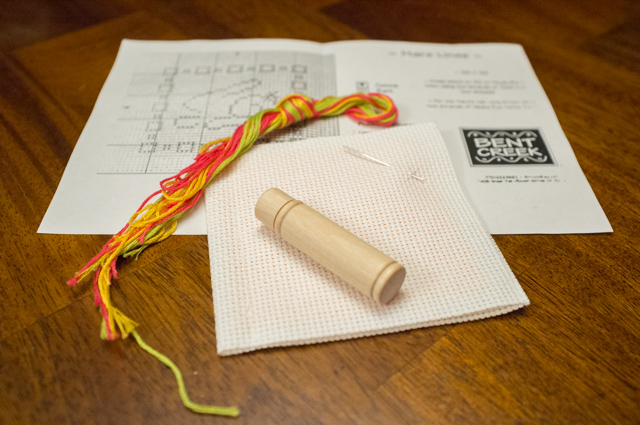 On top of that, there was a pile of free sample kits to choose from when we finished. I chose these little picnic ants and finished it the same day, on our way to Chinatown (my brother was in town so my husband and I went with him and our Chinese friend for the Lantern Festival). 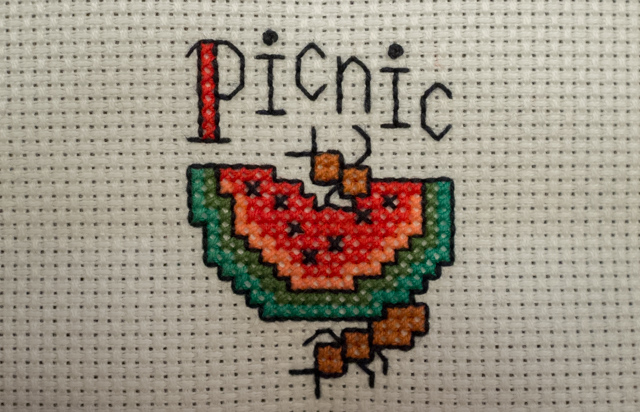 Overall, I was quite delighted and will probably become a member even though they aren’t located as conveniently as I would like. Their mission is focused on education, and that’s what I want out of it! There are two local area shops they mentioned, as well as a convention happening this spring in Chicago. Super excited to see where this takes me!