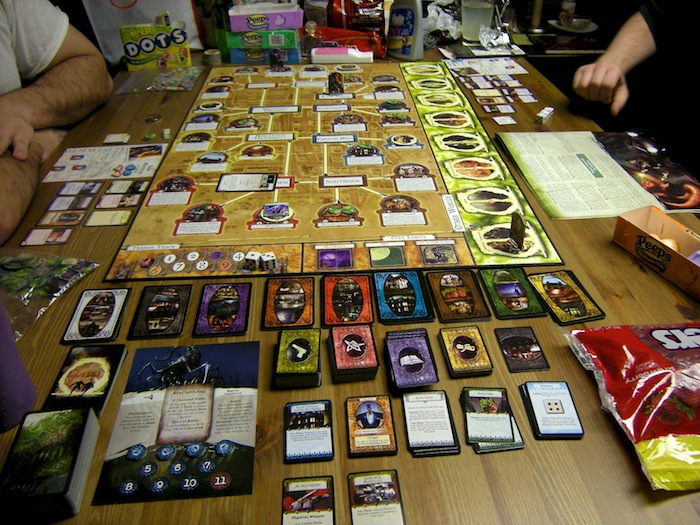 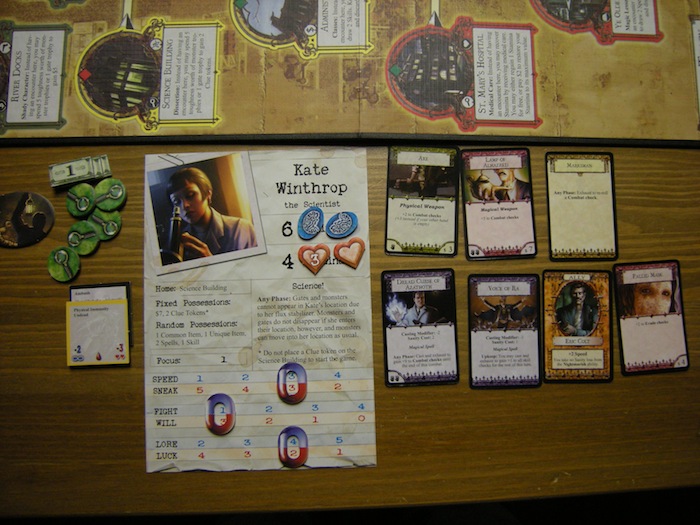 Learning curve: Not too bad – it looks pretty complicated because of all the small parts and the plethora of cards but it is fairly simple to follow. You move your character to colored sections of town, which coordinate with the colored deck of cards to draw from. There are different types of cards you can draw to enhance your character, ranging from common items to skills. There are cards that alter the environment rules, summon monsters, or otherwise make things go bump in the night. The cards pretty much explain themselves so by the end of your first game, you understand how to play. Just remember to follow the order of turns correctly and know what symbols mean what and you are good to go. You’ll likely need to play it a few times within a short span of each other to really nail the rules, though.

Re-playability: Characters are selected at random, and throughout the game you can modify them a little to suit your needs. For instance, if you needed to move farther one round, you can sacrifice your sneaking ability (the stats are negatively correlated). Also, the end boss is randomized which can affect in-game play even before you make it to that level (the idea, however, is to not wake the sleeping beast!). These change it up in addition to the environment cards that are color coded to the sections in town. The goal never changes, though. You work as a team against the board to close the portals before the evil wakens, and if it does get to that point, it’s a sure struggle to win.

My personal thoughts: I like this game because of the setting and the gimmick of the characters (heck, there is an archaeologist in there which was a lot of fun, but he came stacked with a whip and a gun…). Different parts of town gave you different advantages (healing at the hospital, items to shop for, etc), and things got creepy when you went through a portal to try to close it. The creators did well with creating atmosphere by adding little curiosities to the cards such as Headlines that read like an old newspaper, or explaining how you hear screams in the distance and you have to pass a roll-check to keep your sanity. That was something cool in the game too – not only did your character have physical health points, but also mental sanity points (and if you failed a roll, you could go to the Asylum to heal;). I would recommend this game, but it is not among my ultimate favorites.