We had two major tasks ahead of us this weekend. Laying the floor and getting the pantry upright. Both were very time consuming.

The floor isn’t finished in the front room yet but it is done in the kitchen and looks great! It is very slow-going, however. There are five different patterns without any instructions included on how to lay them. There are four boards per box, and though most have two that match with two non-matching others, sometimes there were three in a box that matched or all four were different. We could not find any system to the pattern so we had to keep laying boards down to see if they would work out or not. Then there is the whole issue of aligning the grout line, something not necessary with a wood grain pattern. Lots of precision work!

The second major task was getting a 90 inch pantry upright in an area that at best was 90.5 inches high (at its worse, 88 inches – low ceilings in a wonky house are nothing to brag about!). We never considered the geometrics involved in such a device until we went to do it. Undaunted as usual, we googled some answers and went with a big hole in the ceiling. Eh, what’s more drywall work anyway, right? I am so glad I decided not to primer the entire ceiling yet.

It worked with just the three of us so I will not complain. But I am complaining a wee bit on the subject of the pantry doors not fitting correctly. Someone at the shop messed up on the pilot holes. Before we drill our own, we want to talk to someone to see if theres any kind of inspection – maybe they will give us a coupon or something on our next purchase, who knows.

And my friend Angela made us a chicken pot pie since she knew we would be without a kitchen for a while longer yet. It made for a scrumptious lunch break. And look at those stars, doesn’t she rock?! YUM :D Thank you!! 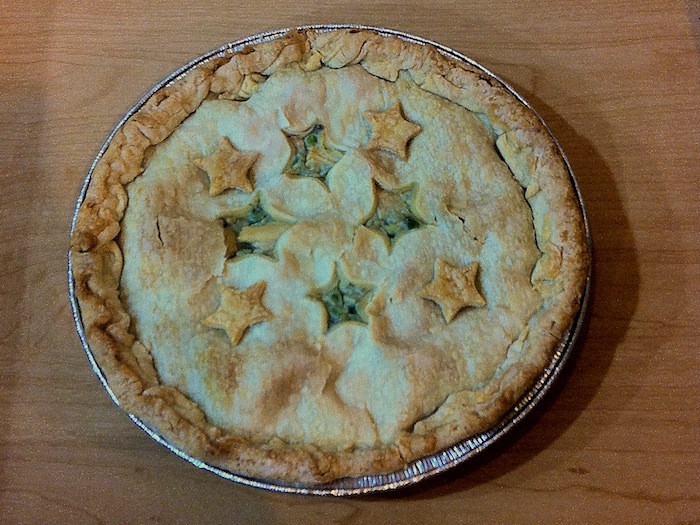