I discovered a free tutorial to make floss tassels over at Hobby Lobby and gave it a go. Of course I selected the spectrum of corals/blushes/pinks; how could I prevent myself? 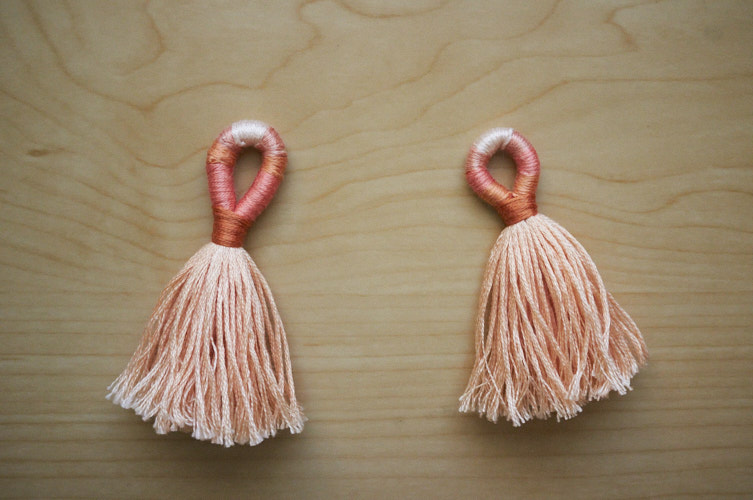 I made the one on the left first, following the directions except that I didn’t use any glue. Instead, I threaded the last color at the end through a needle, and then secured it by threading it through previously wound threads. The wrapped ring is kind of bumpy from having the tied ends of two colors meeting. I didn’t like that, plus I needed more practice to make it look nicer!

For perspective, these are only about 3 inches tall. I wrapped the left one like this: the coral 10 wraps, then 5 for the orangey color, 5 for blush, 10 for the light color, and repeat – then I think 10 times for the brownish color. The second one is slightly different, with the light color and brownish one wrapped ten times, but the other colors wrapped 7.

It must be noted that I made the second one differently from the pattern. It calls for you to tie on each color as you go, from one side to the next. Instead, I laid all my colors onto the skein evenly, except for the last color that connects the skein once it is folded in half. I let that one start in the middle and only hang off one side. Following that, I began in the middle and worked outwards, then flipped it and began in the middle again. When I got to the last color, I wound it around one side just a few wraps, then pulled it tight to the other side to wind a few, before winding them both together. And again, no glue. I found that this resulted in less defined bumps (only one color is tied, rather than two at each meet).

If I make these again (and I probably will – super easy, super fast, and infinite color combinations and sizes!), I will use the second method rather than the pattern’s.

And, when trying to find the link to this tutorial again, I found that DMC now has all their patterns available for free, so I swiped a rather large compliment of lace edging designs. Guess I’ll be needing to dig out my crochet needles!

The last task in the monogram segment is to make a puffy ribbon letter. I chose to use my own handwriting for the shape, and V for my surname since it represents both Boy and me. 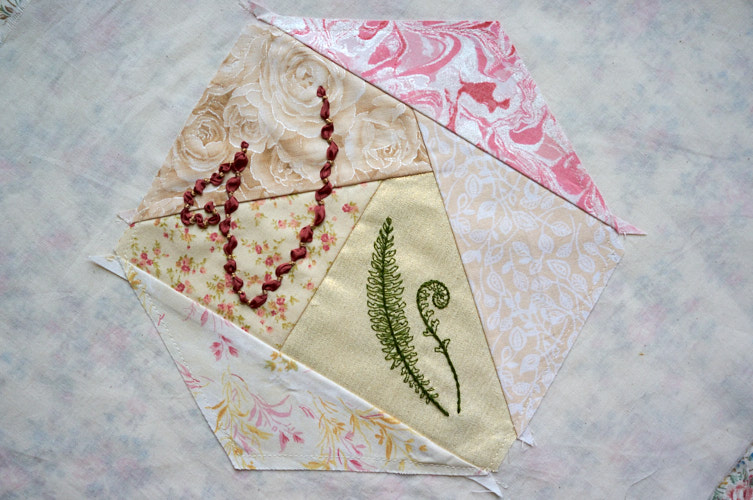 I couched the 7mm silk ribbon down with some specialty perle cotton, which has a thin metallic gold stream running through it. (If you want more details for the fern motif, check out the post I made here.) 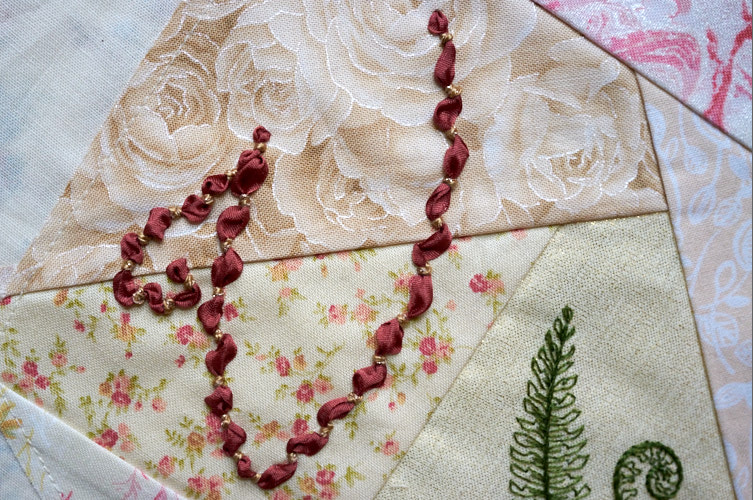 I may decorate the V more when I begin embellishing the blocks themselves, but I do enjoy its simplicity here for now.

I was reminded, also, that ribbon embroidery really needs a hoop stand to lessen its frustration. Too bad I leant my out!

The second task in the monogram lesson was to make a beaded letter. I felt I was going to not have enough beads, so I opted to use a stem stitch in a large perle cotton as fill. I rather like the texture combination! I hadn’t done any true beading work before, so getting the practice to use the backstitch method was nice. To fancy it up a bit more than a plain ole S, I added a little resin rose and a leaf sequin. 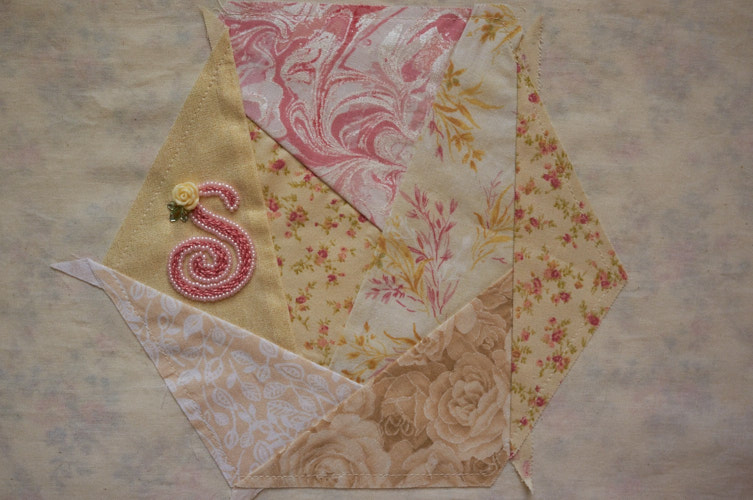 So, yes, “S” for my dear Sasha cat. I just didn’t want to make three monograms all about me, so I figured my cats could qualify (see Maya’s here)! At first I was opposed to the idea because my furry lumps won’t be around forever, but then my MIL pointed out that that is exactly a good reason to stitch them something special! 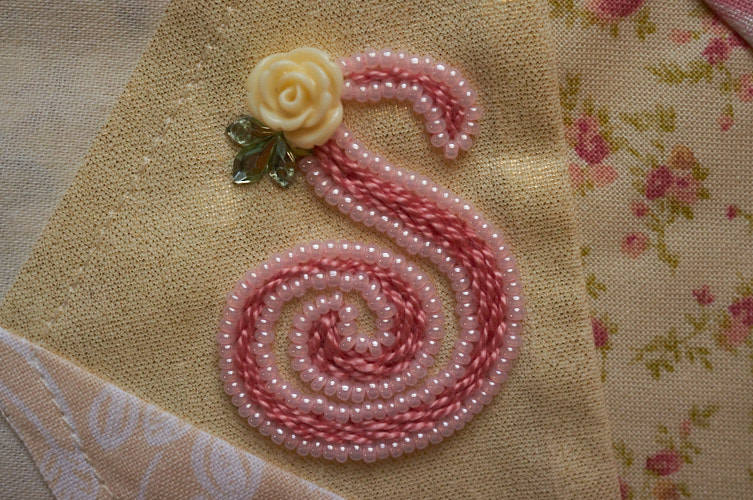 Since I have already done two variations of the letter “R” for me (see here and here), I’ve come up with two options. I may try to make a less feminine letter for Boy, though the ideas I have for him don’t really jive with the rest of the blocks I’ve made. Or, I may use my last initial for the third task. I’m still thinking about this one!