My MIL and I attended our first embroidery guild meeting in March. The project for the meeting was a ribbon candy ornament by Calico Crossroads using perforated paper. I hadn’t heard of such a thing! But, I signed up for it and worked on it here and there since. Mostly, I did so when I was waiting for the rain to stop in Zelda: Breath of the Wild (❤️). 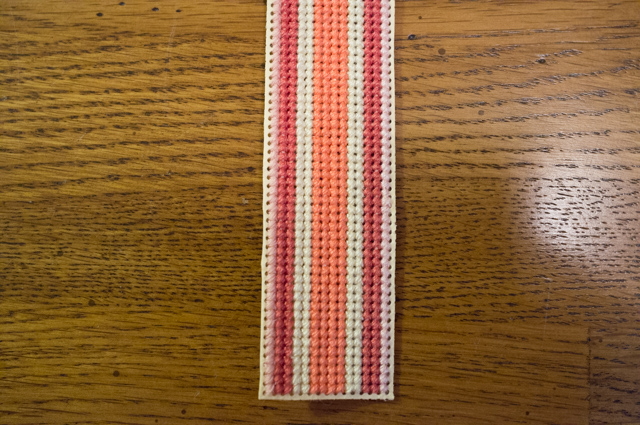 It was quite monotonous and not my favorite: it uses so much thread, and only about two inches gets done within 45 minutes! (I didn’t time it, but that’s how long the TV show is that I used to get me through when I wasn’t playing Link.) 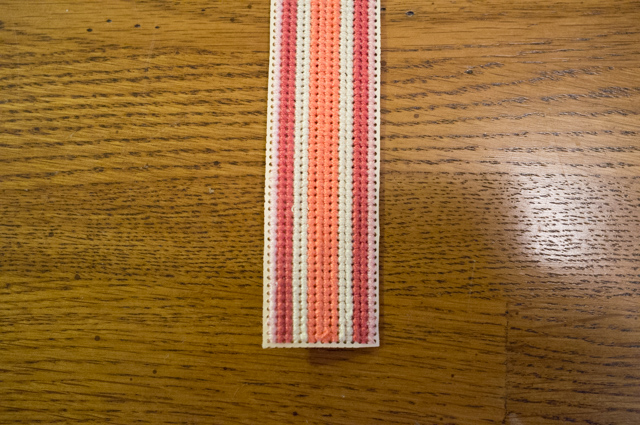 I did mess up here and there: to make it double-sided, you must make each slash twice before moving on to the counter-slash that forms the “X” or cross (also making that one twice). Sometimes I forgot if I had done only one, or already two. And the backside is a bit messier because I did not always catch my tails neatly, as you can see in the above photo. 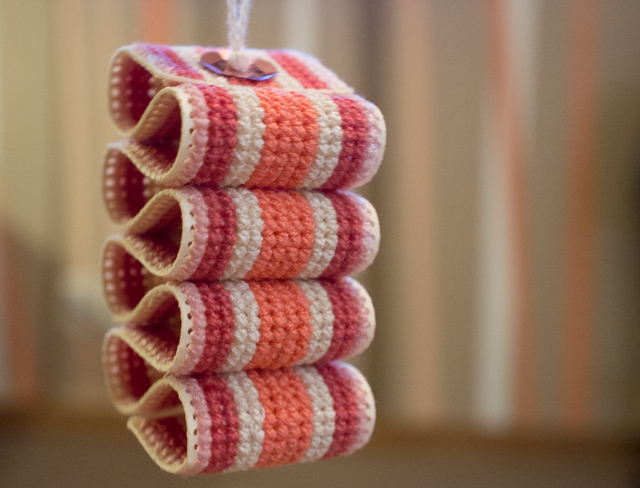 It’s sewn paper – hello! I cringe at the thought of what will become of this piece of paper in the years to come! In the end though, for now, I have a dangly ornament that matches my craft room. And, I did finally perfect the double-stitch, so there is that!

I have two cats. Sasha is the kitten of the family, and her spunky personality often gets her into trouble. Maya, three years older, is like a little old lady cat, prim and proper, and she rarely does anything wrong. The one thing she does (and Sasha actually doesn’t!) is eat the toilet paper. We have two bathrooms, but one rarely gets used unless guests are over, so that toilet paper was never safe (we can hear her usually going at it in the other bathroom to yell at her). Sometimes, we’d discover an entire roll had been unwound, with her little nibbles all along the side. Yikes!

I eventually decided I had had enough of that, and just kept it in the bottom drawer. However, nice guests thought we had just ran out and restocked it, or they were too polite to poke around and dealt with tissues rather than discovering where the TP was (since I did not always think to let new guests know). If it went restocked, the TP enjoyed a short adventurous life. If it went unstocked, I felt like a jerk for not mentioning it. So, I came up with this ugly idea: 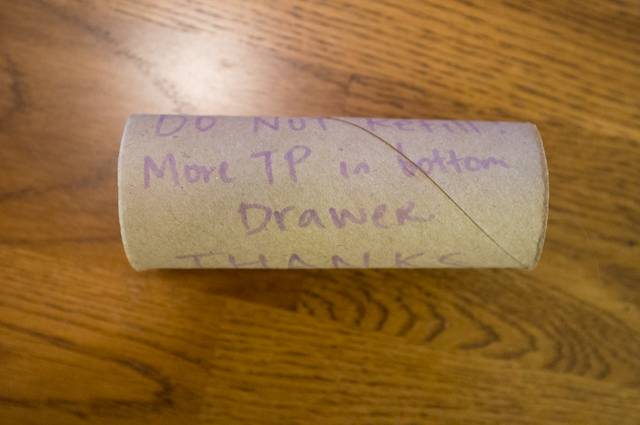 That worked, but I wanted something much more awesome. And a bit explanatory. Eventually, I came across this image (which may or may not have originated here): 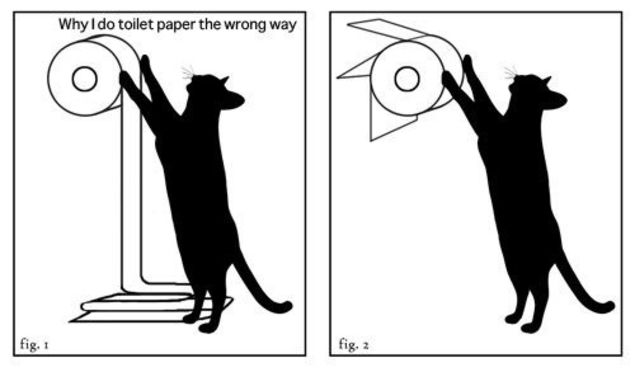 For the record, we did try hanging the roll the other way, but she just tore into it, the little bugger! So, I took that image, photoshopped it, added some words, and embroidered this: 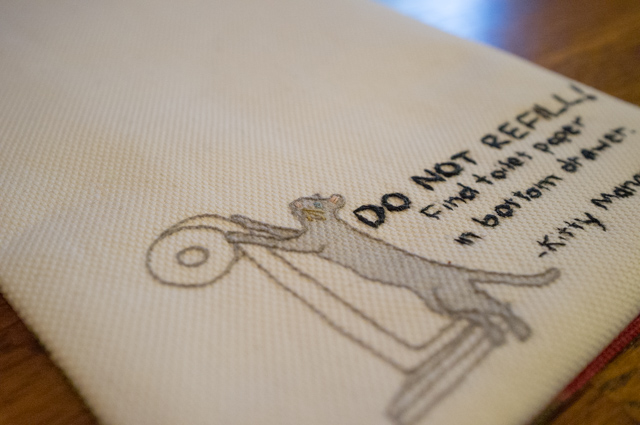 I added some home decor fabric to the back to give it some heft. 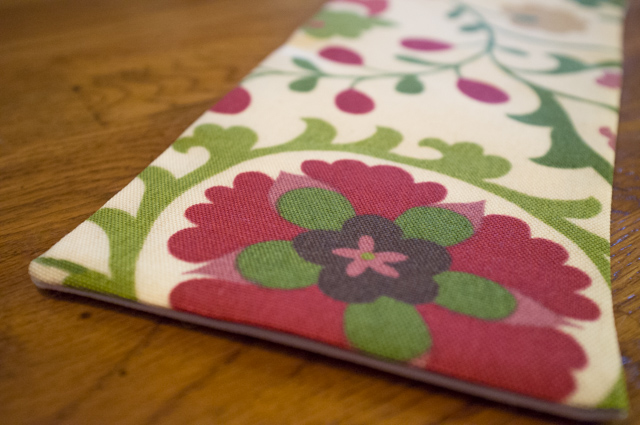 And then sewed it around a roll to have the proper size. Dare I say, it looks so much better than the original! And, my guests get a kick out of it, too:) 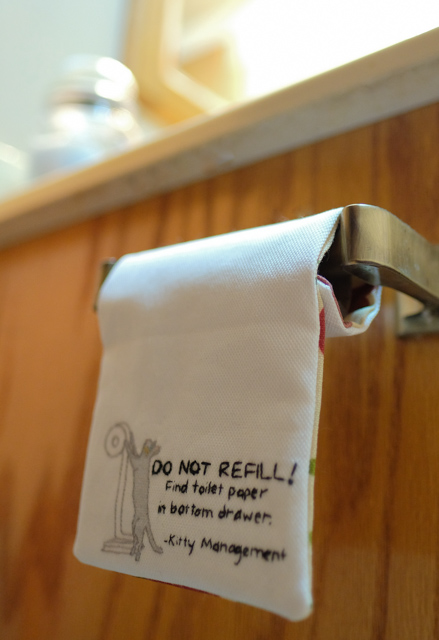 So in yesterday’s post, I mentioned that the embroidery guild gave us a needle book and a pattern to make a bunny on the cover. Well, ta da! 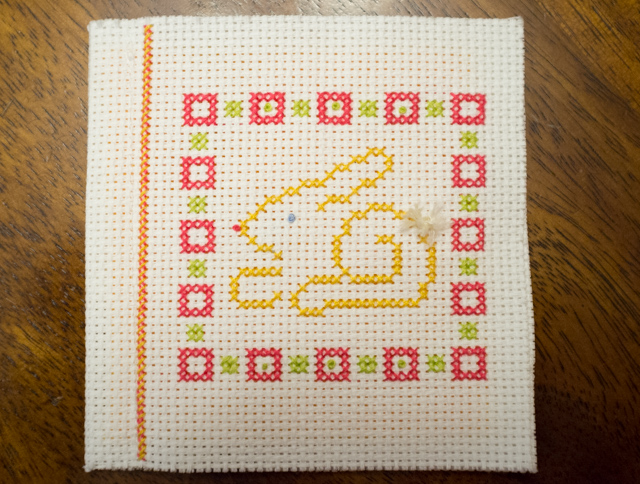 I added my own little details: french knots in the top and bottom border, eye, and nose; a two-color vertical line at the spine; and rather than long stitches, I made some Turkey work for a puffy tail (I learned how in the Craftsy Stumpwork class videos). 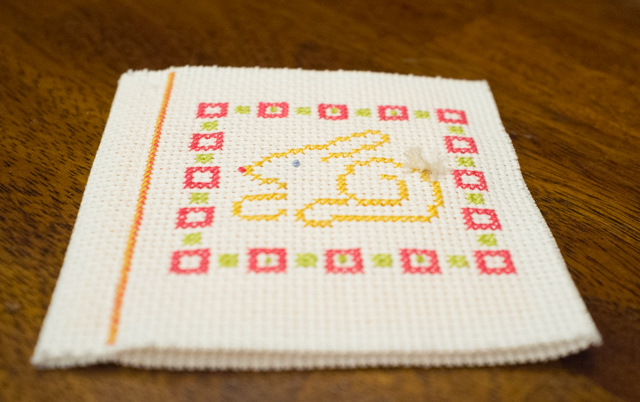 [P.S. I no longer have Aperture for photo editing, (thank you Apple – NOT!)  and to be frank, I have not had a chance to learn more than the very introductory basics inside the replacement, Lightroom. Aperture had a handy auto “quick fix” feature that I haven’t located yet in the new program (fingers crossed it is there somewhere!), hence the somewhat less than stellar images of late. I just cannot get myself to care about photography or real photo editing – I miss my auto button, bah!]