At my last embroidery guild meeting, we learned how to do blackwork embroidery and were shown the EGA pattern Learning to Love Blackwork by Linda Dorril (if you become an EGA member, you will have access to it to try for yourself!).

I have come across blackwork embroidery on the great internet before, and I did not think much of it. It uses counted cloths which I haven’t been a fan of in the past, and it looked simple enough: a single thread with simple geometric designs. 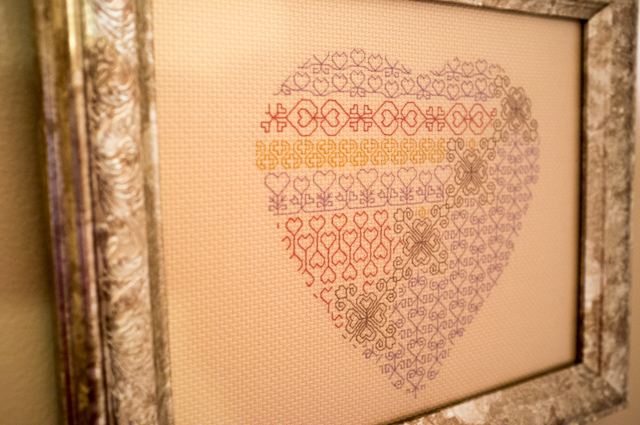 Alas, I was naive. Blackwork is one of the most difficult things I have done in the embroidery realm. Counting really matters, and the more complex the design, the more focus needed! The method we used was the Holbein stitch, sometimes also called the double running stitch. I prefer calling it Holbein because it is named after Hans Holbein the Younger, a painter who visually preserved the embroidery in his paintings of Henry VIII (yes, that one). Some believe that his first wife Catherine of Aragon (whom survived his worst ill temper but that he divorced through annulment) made it a popular style for the well-to-do. I have an art history background, so I loved that it is part of Holbein’s world (I first was introduced to his “the Ambassadors” with a sneaky skull) and I really truly enjoyed Showtime’s The Tudors, so the combination was fascinating. 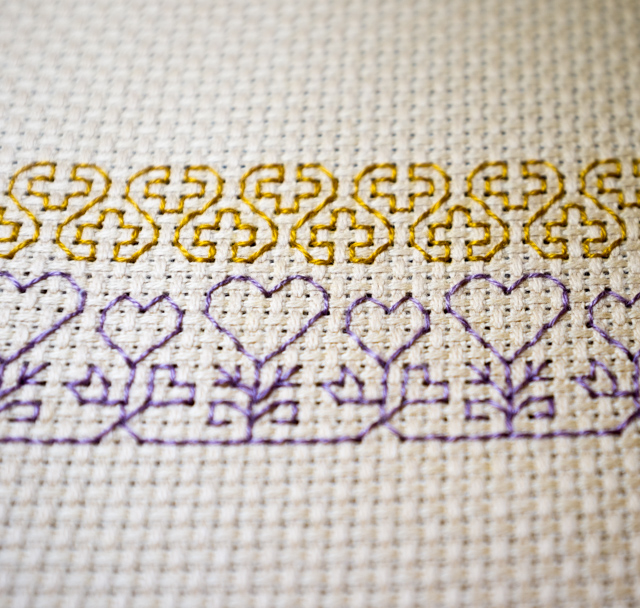 The most difficult aspect for me wasn’t the counting – I felt like I met my match in a world of sewing that married itself to another pastime of mine: puzzle-solving. It was neat; it was fun; it was surprisingly tricky sometimes. I kept exclaiming to Boy how I just couldn’t get over how naive I was before I began! By “skipping” every other stitch, sometimes it was difficult to know where you were going. No, the difficult part was that Holbein stitch is traditionally used on fabrics of cloth where you’d see both the front and back (like the cuff of a flouncy sleeve). Thus, the front and back needed to look identical and nice. The backside looking nice? Not my strong suit. Although the image below looks decent (except for the blurriness and giganto knots), I decided no one would be seeing my backside and just sewed as usual. I’d say about ⅓ is done in correct blackwork style, but the other ⅔ went off key a bit (okay, quite a bit sometimes!). 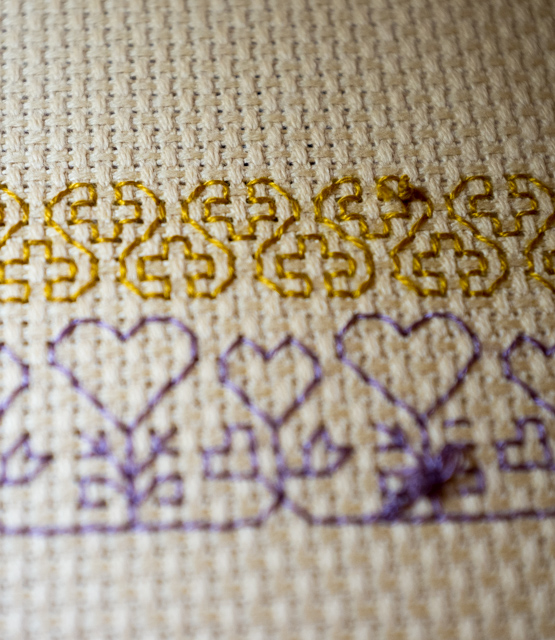 The other issue is that I went off the chart and tweaked the design without drawing it out. I shifted center; I expanded the shape a little; I added extra bits to fill in what I felt like were way-too-noticeable gaps. Perhaps that was seeking a level outside of my beginner skill. Much undoing, redoing, undoing, and redoing was had. But eventually I gave in to my frustrations and the idiosyncrasies I had created and decided I had a finished product. 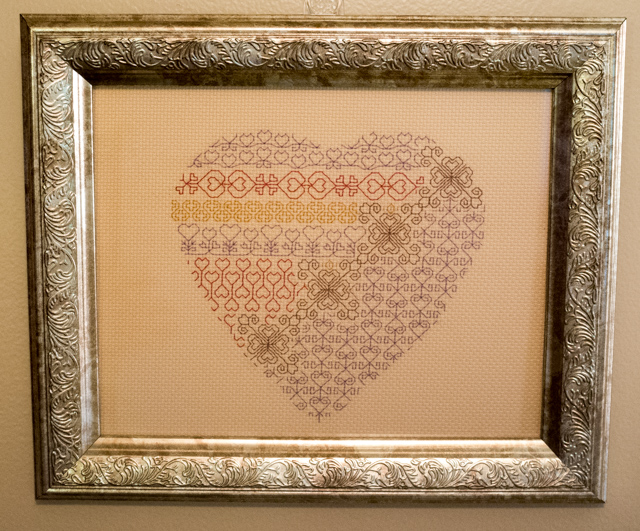 In January, I stopped by a shop to find a puzzle. The employee suggested checking out their paint-by-numbers, which I did. My gramma always had them laying around when I was growing up so it reminded me of her. Why not? I’ve never really painted, but 2017 was to be a year of artistic creation, was it not? I did not really like any of the designs, but I settled on Railbirds. 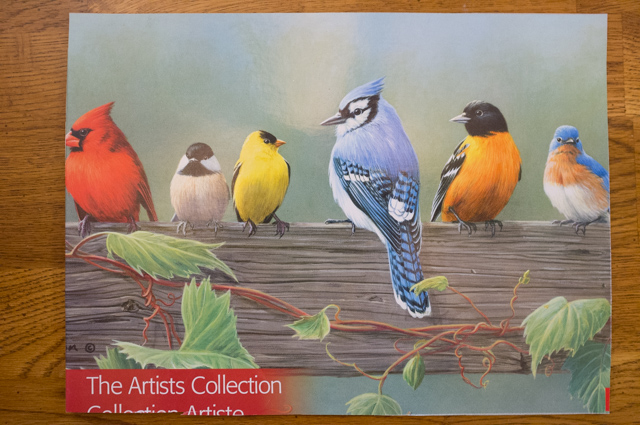 Had I read reviews about it online first, I would have known about this issue, but my voice can be added to many others. First, the numbers in the chart do not match the numbers on the canvas. Second, there are two #10s and no #58 paint pot. And third, perhaps because it is part of their “artist collection”, the finished painting (particularly the birds) would just look like color blobs if you didn’t essentially toss out the concept of painting by numbers; maybe it is designed for people who want to paint with a level hard difficulty? (Or maybe that is how all paint-by-numbers are; I have never done one.) Oh, and fourth, some of the paints did not cover well at all, and I struggled covering up the printed lines at times. 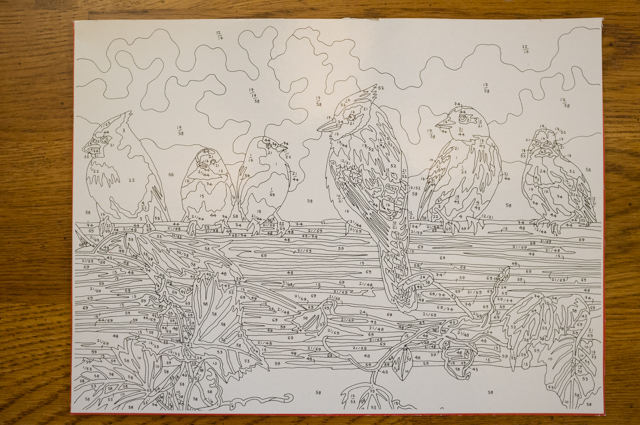 I wrote to the company hoping they would send me a #58 paint pot. Instead, though months later, a package arrived in the mail containing two free products! Who knows if I will ever paint-by-numbers again, but it was certainly nice the company wanted to make up for my disappointment. I didn’t think companies did much of that anymore. 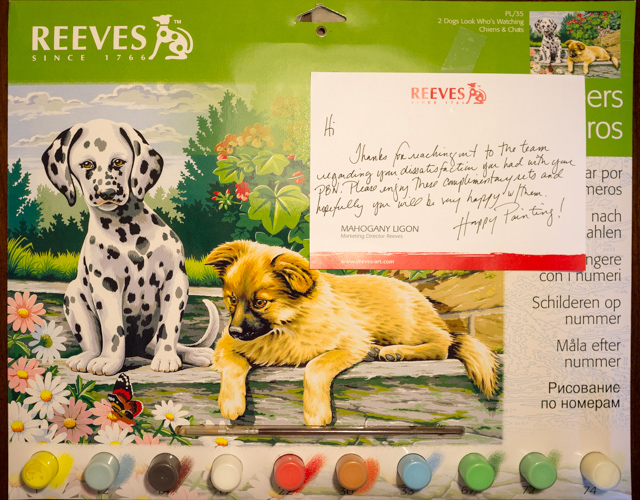 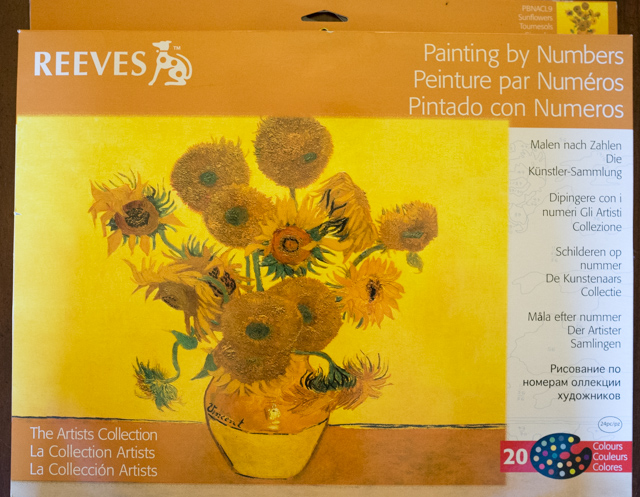 I began painting by following the numbers, and learned quickly that I hated painting that way. It made more sense to paint backgrounds and layer foregrounds than trying to go around little details. I completed the sky first, then the wooden fence. It was with that fence that I realized I had to scrap the idea of painting-by-numbers and just paint. Only, I did not know how to paint, so that was a bit of a learning lesson. Apparently, I took to it pretty quickly though. I am pretty proud of the result! 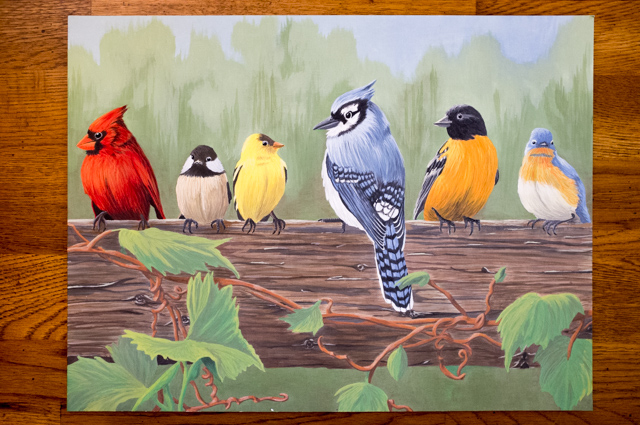 It took me five long months to make (because I also learned that I don’t prefer painting in general) and I gifted it to my mother-in-law who took the Master Naturalist class with me last year and fell in love with birds. That class now has helped me identify what I painted! Some are obvious, of course, like the Blue Jay: 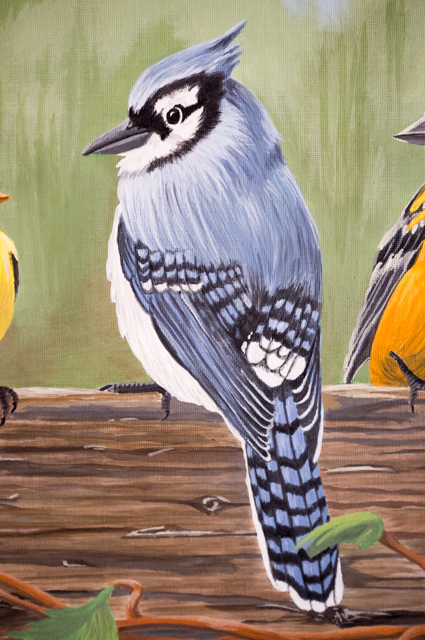 Or the (Northern) Cardinal. But between the two is a Black-capped Chickadee and an American Goldfinch. 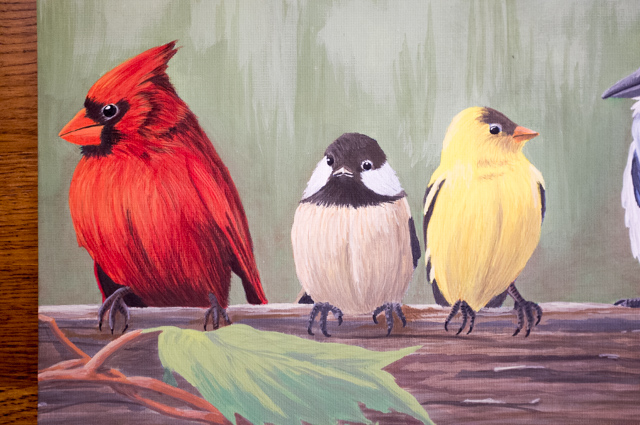 And on the other end is a Baltimore Oriole and an Eastern Bluebird. 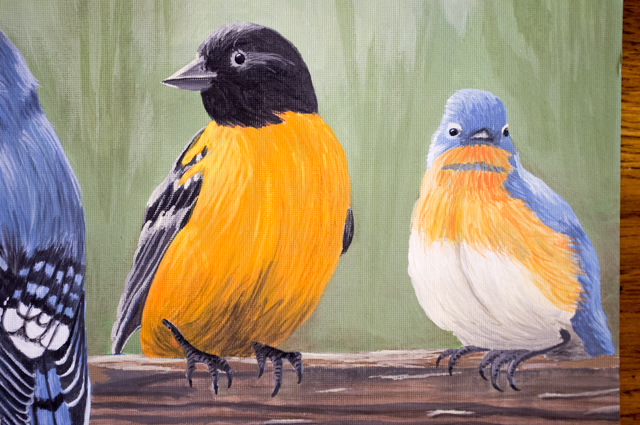 I imagine the greenery to be grapes, though I have no idea in truth. 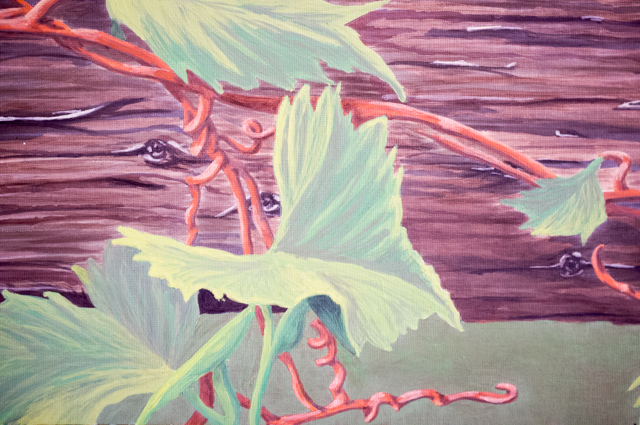 For now I have a love/hate relationship with painting. Sometimes it was cool and I felt the pride while working. But most of the time I found it boring and tedious. Yet, at the end, I am very proud of the final piece. I am curious to see how well I could do with an image that isn’t pre-printed on canvas…. 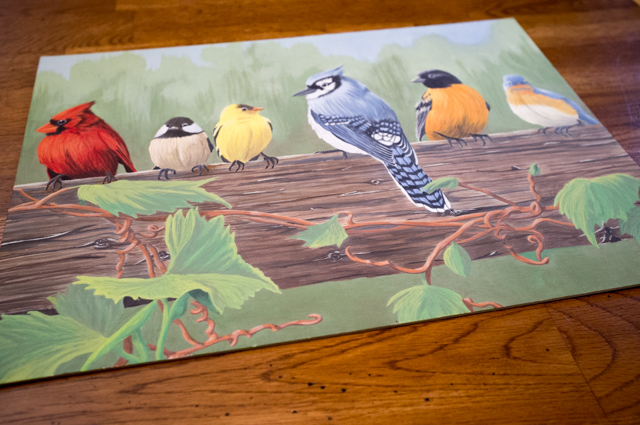 So, I did it – I bought the rest of the project from a seller on eBay! 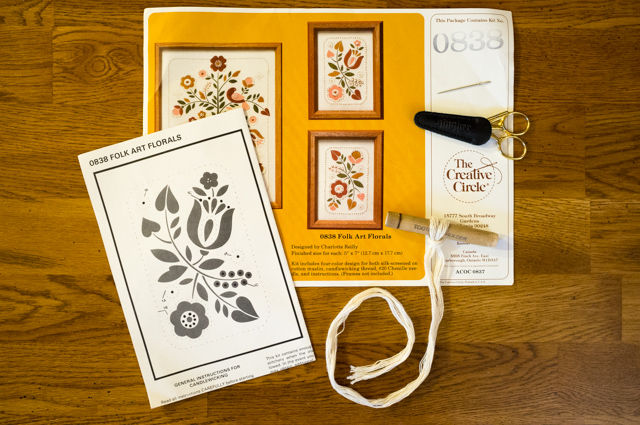 I was shocked by how small each panel was – but then I read the print on the actual project and realized that they were exactly the size they are suppose to be! Ha! Anyway, I stitched them up real quick like. Couldn’t help it. It’s addictive. 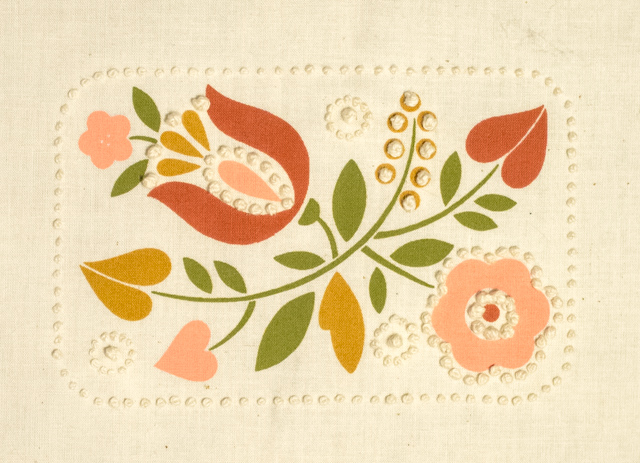 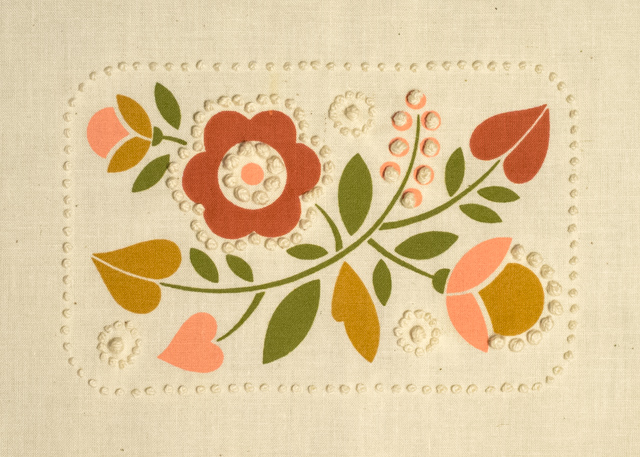 And then I was unsure how to flatten the fabric out. I checked my go-to gal, Mary at NeedlenThread, and found her post on Damp Stretching and Blocking Embroidery. Now, I do not have a corkboard or tacs, and I wasn’t in the mind to wait til I could go buy some, so I just used what I had on hand: pins and needs-to-be-replaced carpet. It worked as you can see in the above photos, though! Another new technique has been added to my repertoire. 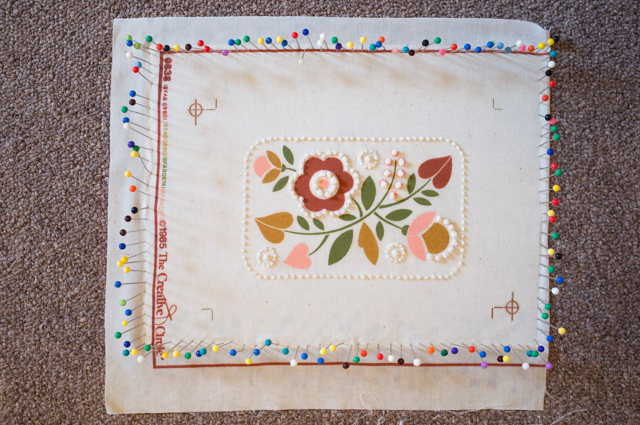