I attended a free class at the county library hosted by a local quilt guild, Heritage Quilters (very similar to the one put on by my embroidery guild). Some of the embroidery guild members are also members of that guild, and I had been interested in seeing what they have to offer so it was a good time to do that! Plus, my neighbor (Boy’s stepmom) is a newish quilter so I knew she would enjoy meeting the ladies.

We were given a small kit that included safety/pins and needles (a quilting, between, and crewel), a thimble, “light and dark” fabrics, batting, thread, a slip of felt (for stashing the pointy bits), and a chance to win some mini-scissors (alas, neither of us won).

It was a very basic introduction to quilting and sewing in general so I knew most of it already but that bothered me none. I was more interested in learning about the guild anyway. But I did learn a thing or two! I can now make a quilter’s knot (previously, I did the lick-the-end-of-the-thread, loop-around-finger-and-twirl method which sometimes leaves quite bulky knots!). I had tried to do this a while back but hadn’t realized that I was pointing the thread in the wrong direction (which results confoundingly in no knot!). Google it – there are a lot of resources to show you what I am talking about. I must still practice popping it through the fabric though, as I tend to yank it all the way through and back out again. Boo. 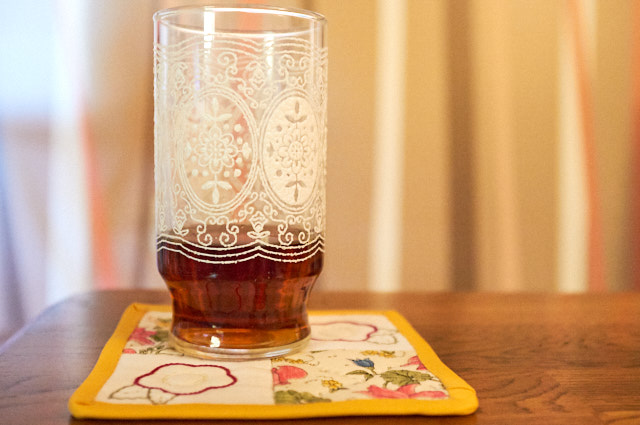 We couldn’t stick around to finish our little mug rugs, but I whipped mine up today. It is not my best work by any stretch (especially the sad binding!), but I did learn some technique in planning. It was suggested to “stitch in the ditch” between each fabric, “straight stitch” across the corners of the “dark” fabric, and then quilt a shape in the “light” fabric. I can’t help but embroider sometimes, as before I even realized what I was doing, I had embroidered a red flower with whipped stem stitch. Oh well! 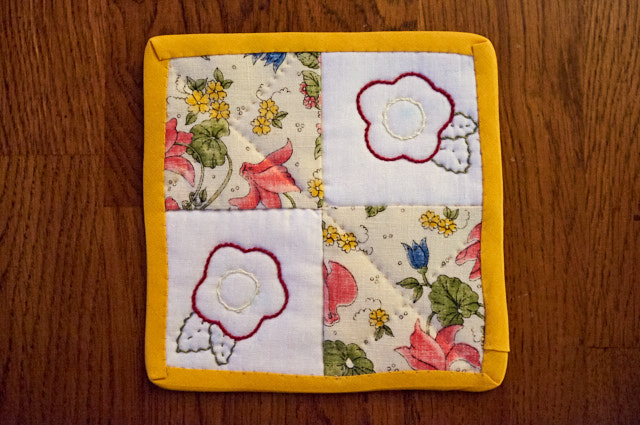 And I had been talking to my MIL about embroidery projects; she said that back when she was really into it for a stretch, it was quite common to date pieces (and even sign them with initials) but that she doesn’t see many people doing it today. I know I think it’s rad to see photos of old embroidery with stitches like 1874 or something. That’s probably the anthropological side of me, sweeting on the history of objects. So, I dated this one! 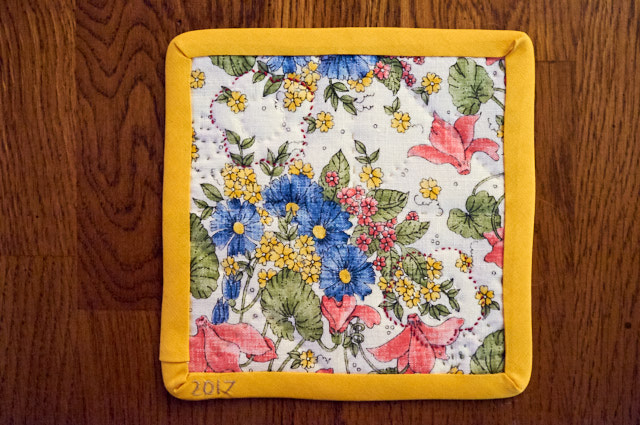 And totally unrelated, but if I ever got to name a quilt guild, I think I would name it Quild. Just sayin’. (And maybe Embroguild? It could work…)

This is actually the last “completed” project I have done recently. I was doing some archaeology work this summer and stayed with a gal named Ellie. She teaches yoga and raises bees! I convinced her cat Sampson to fall in love with me, too. I wanted to give Ellie something since I was staying with her for two weeks, including her birthday, and she offered to teach me yoga for free (though the timing never worked out for me) – and she gave me some of her homegrown honey! I thought a small bee + yoga cross stitch project would be appropriate and require less time than surface embroidery (ha, lesson learned!). 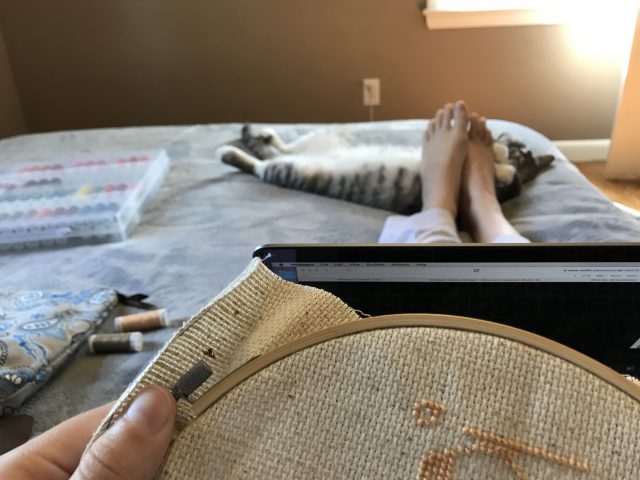 It is my first piece that has absolutely zero knots! I don’t mind knots, but I thought it would be good practice. Here you can see my neat and tidy back: 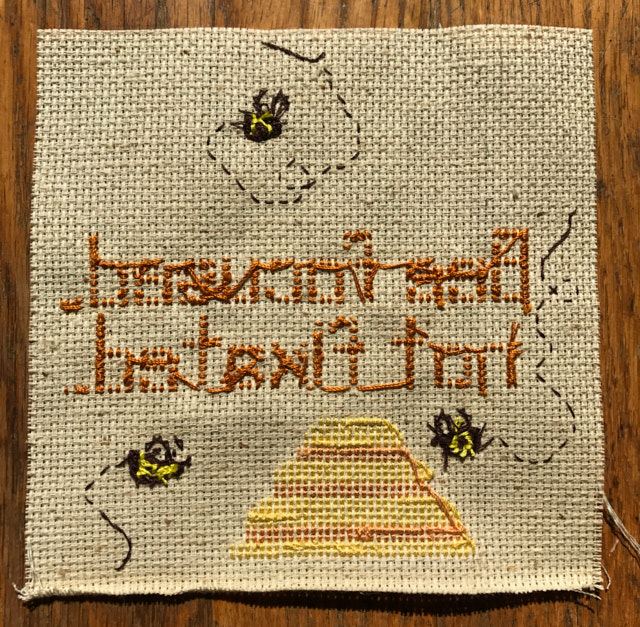 I borrowed the ideas from two sources: Embroiderbee had this great quote that I thought fitting for Ellie’s interest in yoga, plus I added the bees from it. Daily Cross Stitch had this little image that I used for the beehive portion and the inspiration to add the little movement trails on each bee. I could not be more happy with the bee + yoga cross stitch gift! 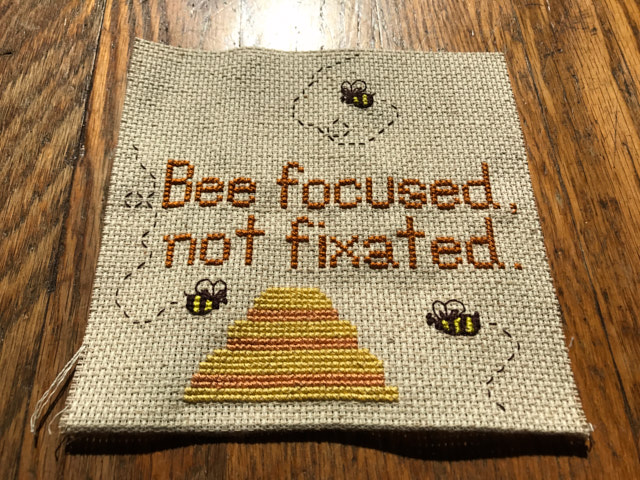 Without planning this project ahead of time, I had no thoughts in mind of how to finish it or even the supplies to do so. Luckily, I hear Ellie is a crafty gal herself!

So I fell off the blogging wagon a bit when Apple decided to stop supporting Aperture and therefore managing photos became extraordinarily menacing. Boy got me Lightroom but I could not get on board. Part of that was how it imported my Aperture library all fungled and so I just didn’t think too highly of it from the get-go. After much complaining, he set me up with a trial run of Capture One and even though apparently the interwebz claims it to be quite difficult, I took to it with ease (though the price tag might be more of a pill to swallow!).

So on that note, I hope to be adding quite a few posts once I get everything sorted out appropriately (because I have been crafting!). In the meantime, check out how I reworked that Scandinavian-inspired heart for my guild I wasn’t digging. The colors are more “English rose” than Scandinavian, but that’s because it was my first foray into the world of legit perle cotton so I just picked some colors without a project in mind. I think I love legit perle cotton. This was made with size 12. I am not sure what it will be yet so for now it is just hanging out. 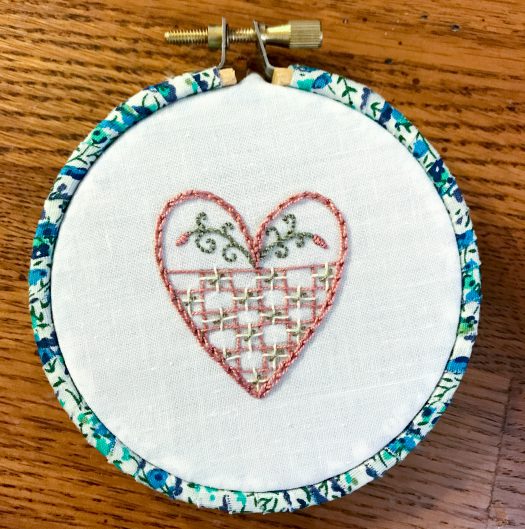