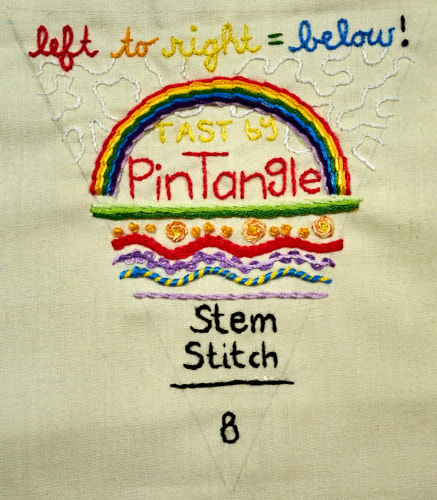 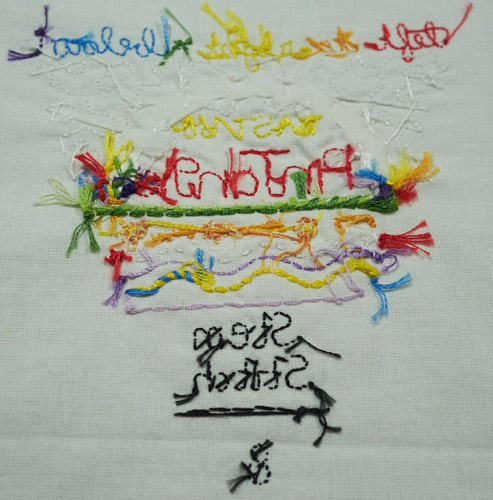 I wrote the phrase “left to right = below!” which will help me remember how to sew the stem stitch (the outline stitch would read “left to right = above!” though some say that they are really the same stitch, just done differently…). I often look it up first or risk moving the working thread above and below and back above, which I realized was part of why mine never look right. I also realize that for me, even though many tutorials suggest you split the difference between where the thread enters and exits the fabric for your next stitch, mine always looks better if I enter just next to where the last thread left. The other main thing I was doing wrong is not changing the length of each stitch – most of the other stitches I know look best if the lengths are the same, so I was following that rule. Well, that is a huge fail for curves! Shortening the stitches around bends is exactly what needs to be done. I have so much improvement in the skill – now I just need to remember to be patient when I sew it around curves, as they take much much longer than straight lines!

The moment I saw a padded raised stem stitch, I just had to make a rainbow. I don’t know where that inspiration came from, but it was definitely happening! I don’t necessarily like rainbows, or basic primary/secondary colors, but wow! I love the effect here.

Then I pondered on how to fill the space and I knew I wanted to honor Sharon, since she is the brains behind this project and this would be a perfect place. Originally the phrase was going to say “coordinated by” or “courtesy of” or something but I worried I wouldn’t get the words to fit and look nice. I settled on “TAST by” and I hope it doesn’t come off like she is the one who sewed it up (because, hello, hers would be so much more magnificent!!). The white doodles are just squiggles to practice curves, but I chose white to simulate clouds.

The first line are three greens, shading from light to dark. Then, fortuitously, Mary recently posted a new (for me) version of stem stitch during the week so the timing was great! I added some orange stem stitch roses. The red squiggle is a raised stem stitch (similar to the rainbow but not padded). The purple line (standing in for indigo) is laced. The yellow line is whipped in blue. And the violet line is the Portugese knotted stem stitch – pretty easy and now one of my favorites!

And of course, the title. I only have one skein of black and I am pretty frustrated with it. It is DMC, but must be really really old because its so fuzzy and is cranky to stitch with. But, with no pennies for the craft budget, I am grateful I have anything at all to stitch with! I did buy some wax to try, so perhaps that will help. Hmm, note to self…. 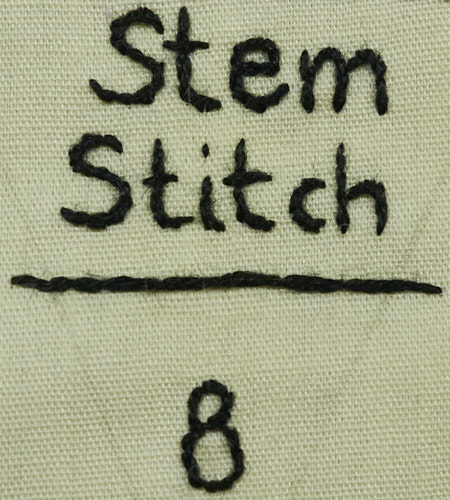 I had my second colored pencil course tonight – you can read about the first here, if you missed it. Tonight, we learned other fill techniques.

Cross hatching, for those of you who don’t already know, is simply drawing straight lines one direction, then overlapping them with perpendicular lines. The trick is to keep the lines straight, watch your spacing, and keep the pressure on the pencil the same. 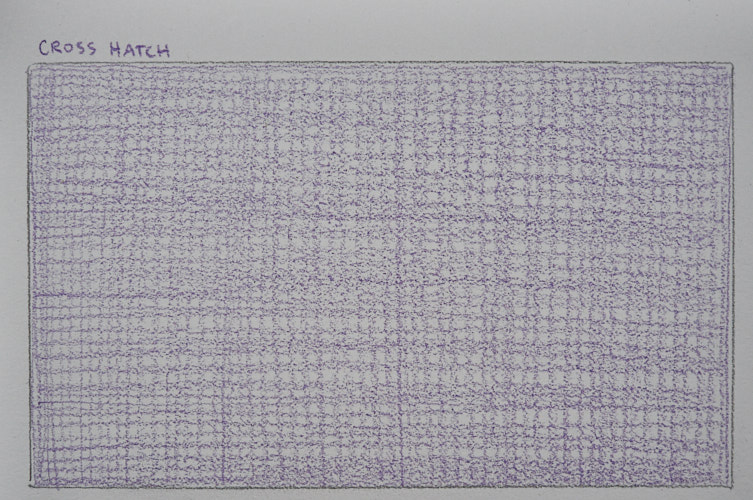 We also learned stippling, which is just tiny dots. To make something look darker, you have dots closer together. Lighter shades will have less dots, spaced further apart. 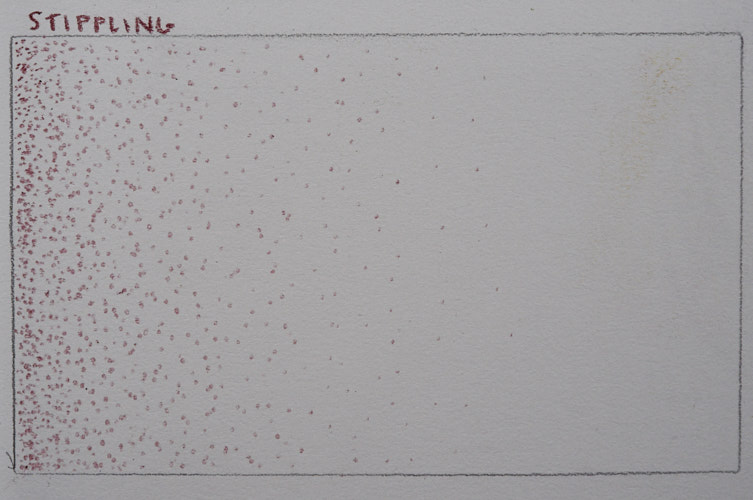 And then we did something I had never heard of before! We started out with a color, shading from dark to light (simply by pressure as in the first class), and then used a substance to blend it. Tom listed some other options for this, but for class purposes we used baby oil. Doing this makes it look more like paint than colored pencil because, when using pencils like Prismatics, it melts the wax base and blends quite nicely. 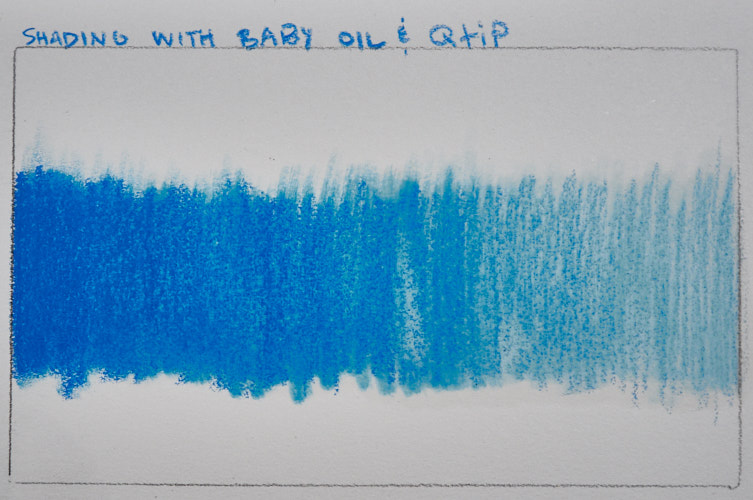 Then, for our end-of-class project, he handed out a color copy of a still-life he did and asked us to mimic it. 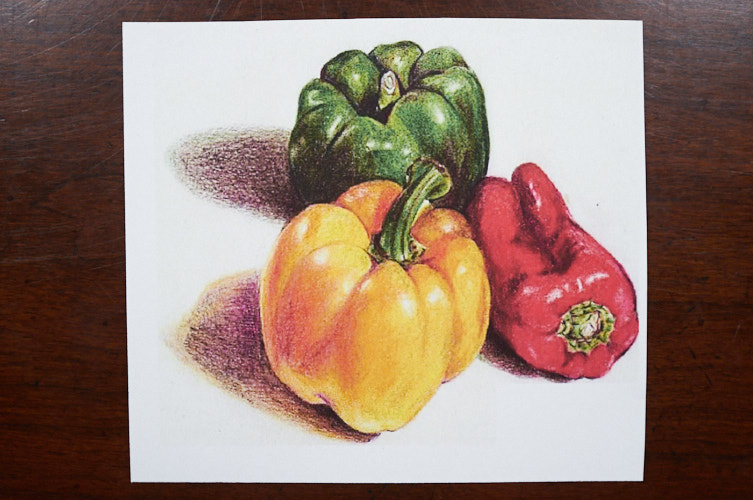 The classes are only an hour and a half long, so we weren’t expected to finish tonight. My yellow pepper looks more like a pumpkin so I call this one “Cici n’est pas une citrouille” ;) 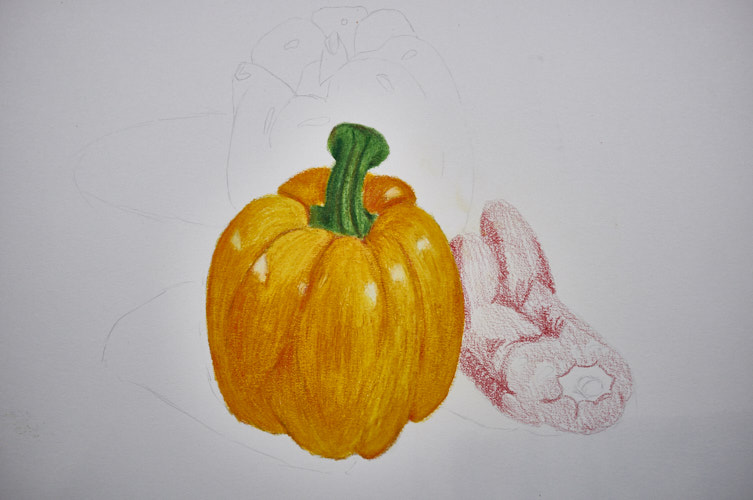 I am debating buying more pencils so I have a better color selection, but I don’t want to pay for duplicates. I’ll have to dig around all the pencils I’ve collected over the years and see if any have a wax base.

First up, I have not progressed any on my ribbon embroidery. Boy’s got me pretty busy up at the office, and as I may have mentioned, it requires a hoop stand to do it properly. Not only that, but I had a lot of drawings to catch up on for my 100 Day Project, and I started a colored pencil course. I’ve also been planning a baby shower and getting the quilt ready. Add to that my cat woes, and I just haven’t had much other free time. (Maya has a secondary infection and is now getting medicated for that to help her feel better and to eat more.)

I did knock out a portion of TAST so far, though! I hope to get it rounded out by Monday. February is turning into a busy month though so I have to actually watch out or I may fall behind! More details to follow when it is complete. 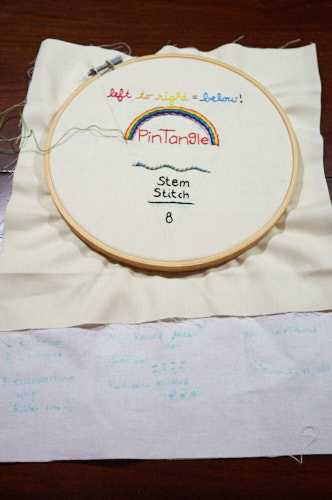