This week’s stitch challenge was presented by Emily Tull – I’ve come across her work before because she does amazingly expressive threadpaintings! I must be honest here: I found the challenge too challenging, haha! 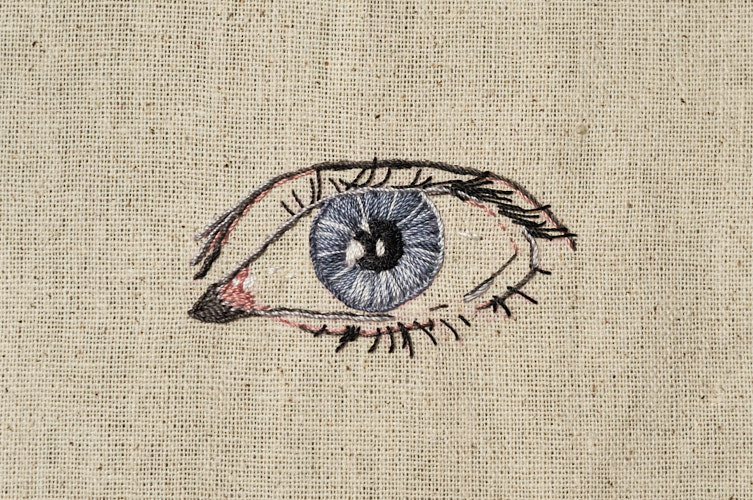 What I mean is that Emily showed a very energetic eye as the example piece and I just couldn’t get myself to follow her directions. My hand refused, I am sorry to say! Her eye had a ton of character in its simplistic sketchy style. My eye took a more formal path, as apparently I am quite reserved in my expression (by the way, I had added “expression” to the list of practice, alongside “process”). I really had intended on following exactly, to stretch my box and get out of my comfort zone. Instead, I was a little baby about it and relied on my favorite stitching (stem stitch). I did take her advice for the “loose” straight stitches to make up the eyelashes, though.

In my hand, I wasn’t that impressed with my own work, but once I stepped away from it, I saw how realistic it actually is! I was stressing over adding pink to the mix – which I did because I had thought the linen would have been off-white enough for the white highlights to show but they didn’t; the pink was my attempt to bring them out a little more. Also, my reference photo didn’t give me a lot of eyelashes to go on (it’s my own eye, so they are half-invisible anyway being half blonde, and I should have known better but I don’t do makeup).

Maybe I should call this one “Meyeself” as it might be the very first thing at all related to a self-portrait I’ve tried with thread. The only other self-portrait I have made, that I can recall, anyway, is my little clay head. Curious, as I don’t think I ever blogged about my clay endeavors. Who knows where they all got off to! But here’s two: the blonde is of course the self-portrait ;) 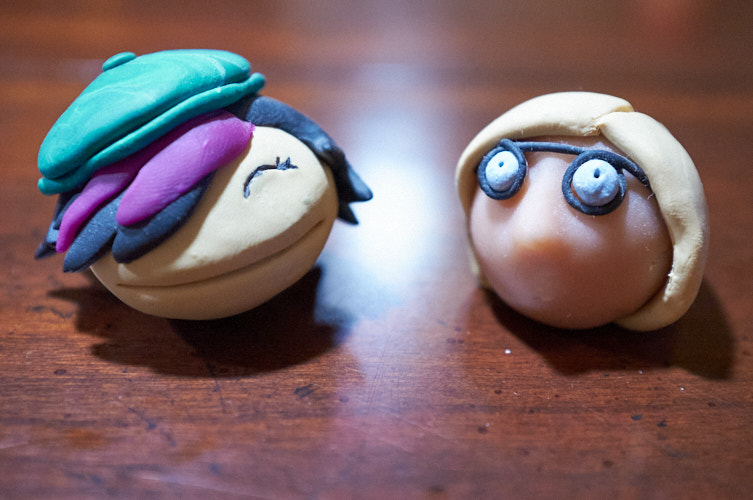 I came across a stumpwork portrait tutorial by Queenie’s Needlework some time ago and finally had the gumption to give it a try. One of the last steps Queenie offers is to give the portrait a name. This lady doesn’t look very much like anyone I know, but for some reason I felt my great gramma Irma was in there somehow. 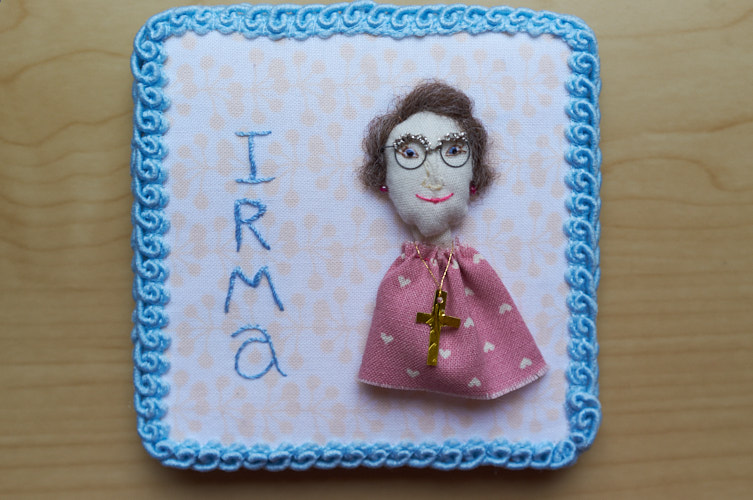 She lived to be 93, having passed away from “old age” in 2005. My great gramma always represented a strong female to me, having raised 11 children after my great-grampa died in 1954 (for perspective, she had 31 grandchildren and I was one of 40 great grandchildren – and she already had 9 great-grandchildren!). She lived on the same family farmstead that they got when married, in the same slate-roofed house (which is on the state’s registered architectural Landmarks list). Since my gramma lived on the farm plot just next door, I saw my great gramma often when I was little – especially because a few of her grandchildren, which she babysat, were near my age. And since she was the matriarch of the family, every Christmas saw all her descendants gather at a rented hall to celebrate, so I had much closer connections to “distant” relatives than probably any of my friends. 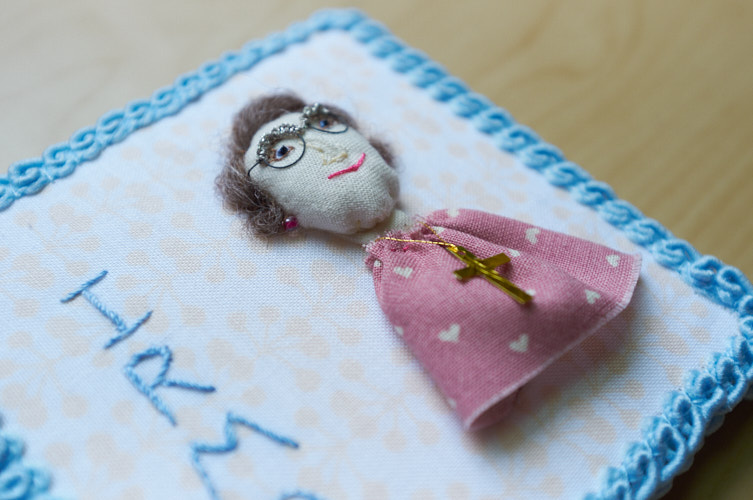 She was an avid hand-quilter and I have inherited an 8-point star quilt she always kept on the bed. If she wasn’t quilting, she was cooking. Every Christmas she gave us a bag of fresh baked cookies – so many kinds! Monster cookies, sugar cookies, and butterscotch chip cookies were my favorites. And any time I stopped over, there was a giant pot of soup boiling and never a short supply of goldfish snacks. Her third passion was her religion, which is why I added a cross necklace. 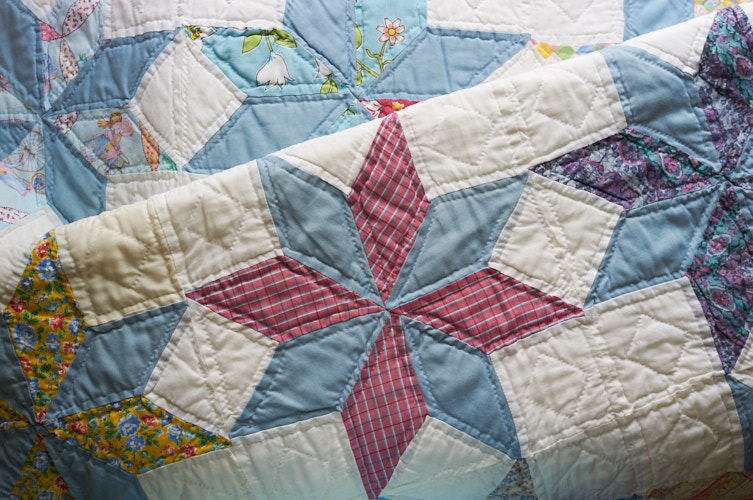 In grade school, I had had an “interview” assignment where I was to come up with a lot of questions about something in history and ask an older person for the answers. I chose great gramma, of course, and asked her about life in the 20s. She giggled when I asked if she was a flapper, acting like it was such a nonsense question. Now, older and wiser, I understand why she found that so funny;) She never learned to drive (since she didn’t need to with all the children to help), and never remarried (because she still was married in her heart). My great gramma also kept a turtle in the basement, but I rarely had the pleasure of seeing it as it was very good at hiding. And she was creative; aside from making patchwork quilts, she taught me to make ornaments out of pasta or how to play Jacob’s Ladder with a string, and often wrote poems. I also have a jar of heads she made – adorable pantyhose doll heads! And she told me how she use to carve apples into heads and let them dry. 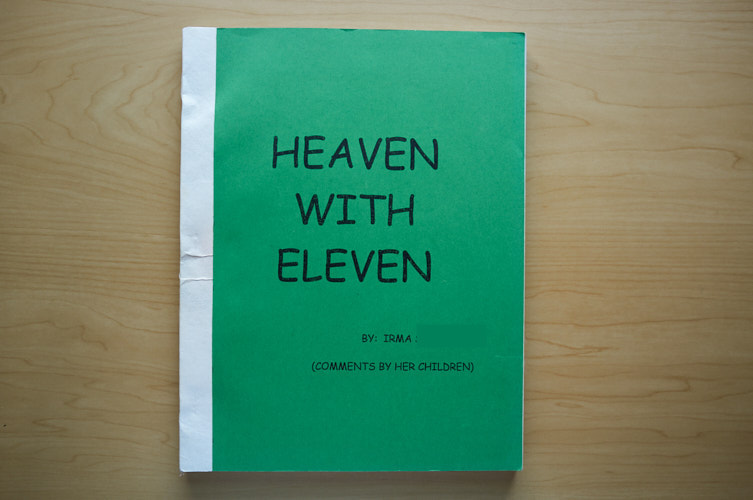 I don’t doubt that the relationship I had with my great gramma is part of why I am interested in history as an archaeologist. Through her, and that long-ago assignment, I felt connected to a past at a young age rather than the past being some boring concept written about in books that had nothing to do with me. One of my prized possessions is a book she wrote with her children, titled “Heaven with Eleven”, where she recalled many events in her life, old wive’s tales, and commentary on the old times – lots of photos were included and she wrote a little bit about each of her children, too. I never met my great-grampa so I was intrigued to learn about what kind of man he was, also. I had her sign it for me, which she thought was silly, but I don’t think she realized how important her history was to me. 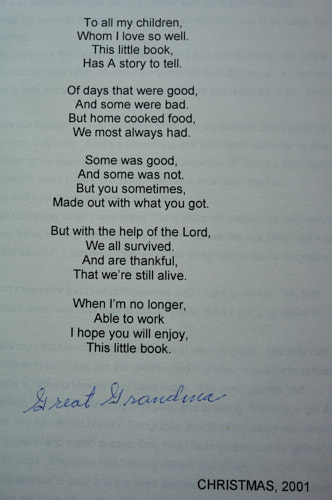 As far as construction goes, I followed Queenie’s super easy tutorial and thought about some things I picked up from Salley Mavor, like using wire for glasses. I stripped the green paper off of some floral wire, found an appropriately sized knitting needle to wrap it around for the lenses, slipped the wire through the ground fabric, then buttonhole stitched the top of the frame carefully (the glasses are only connected at the nose piece and “behind the ears”). Beads became earrings. Felting wood became hair. Krenik thread is the necklace chain, and a cut gold leaf sequin became the cross. 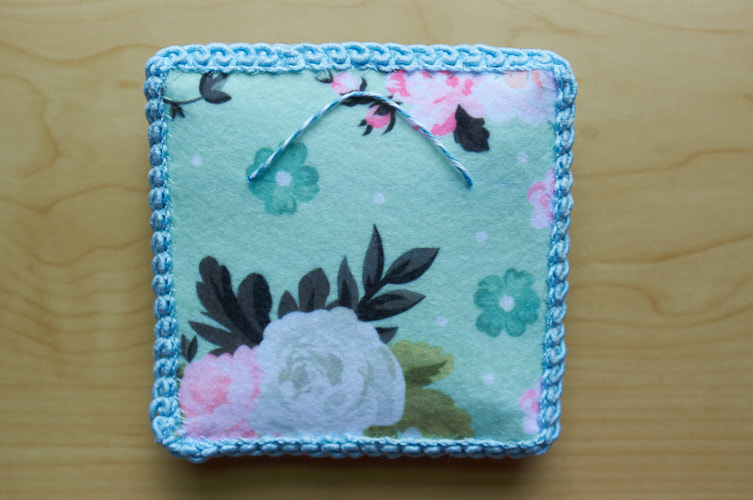 For the backing, I used foam board (this piece is 3.5″ x 3.5″, by the way), covered everything up with some felt you’ve seen ’round these parts before (and a bit of string for hanging), then tacked on some pretty blue trim to finish it off. 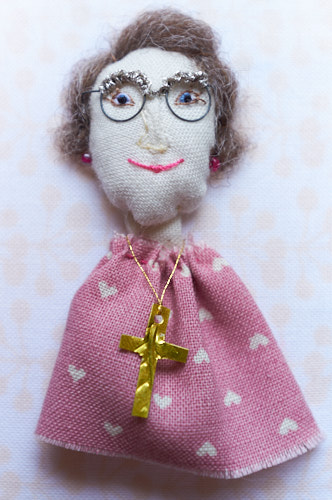 This project is easily done in only a few hours! I was really impressed by that. Go try it yourself! :D

I picked up a couple of Lin Vandenberg’s Historical Egyptian Treasures at my guild a while back. They are from 1992 and I can’t seem to locate any online reference about them. It is a technique I hadn’t tried yet: pattern darning. I say I don’t like doing counted work – at least from previous experience (cross stitch, canvas work, and blackwork); but I think pattern darning isn’t so bad actually!  It is a very basic concept, and in fact, the flyer claims nearly all pattern darning found in any culture can be traced back to the eastern Mediterranean and Mamluk Egypt. You simply weave the needle over and under threads of the ground fabric in horizontal lines (using the weave of the ground fabric as the grid), then flip the work and repeat; for me as a right-handed person this means I am always working from right to left. 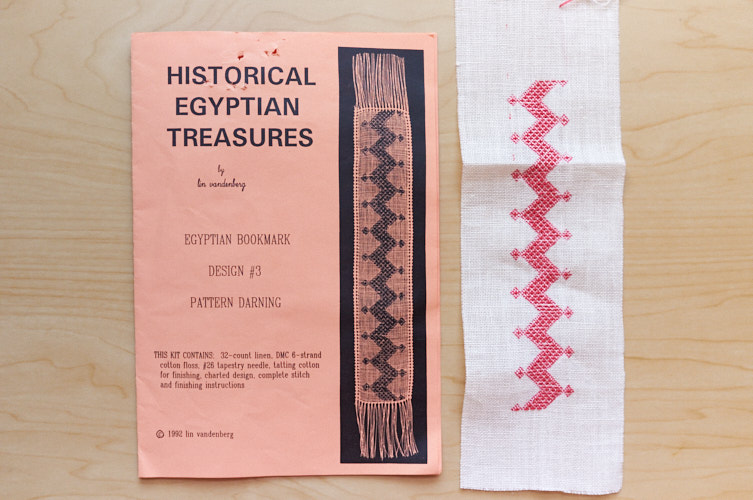 This particular variance (Lin’s Egyptian Bookmark Design #3) is based on a 13th-15th century archaeological fragment and is representative of a transition shown within the evolution of pattern darning. (Please excuse Maya’s chompmarks on the pamphlet – there is a reason she is known as the Paper Vampire!) This is because earlier work was focused on the void, with evenly space stitching. You can see an example of using the negative space with darning stitches over at Royce’s Hub.

This design moves beyond that, so that the stitches are the design. The big evolution here is that instead of evenly measured stitch lengths, someone got the idea to vary the length of the stitches (in this case, either over one thread, or over three). And not only did the color became the design, but within this stitching you will see little diamonds making up the zigzag pattern.

I found it frustrating at first to be doing this on a non-even weave fabric, but then I really liked it because it would be so much more historically accurate! So, the gaps in stitching you see aren’t mistakes; it is simply because the fibers vary in fatness. Note that the fabric is turned here – I worked it in vertical design, if that isn’t obvious. 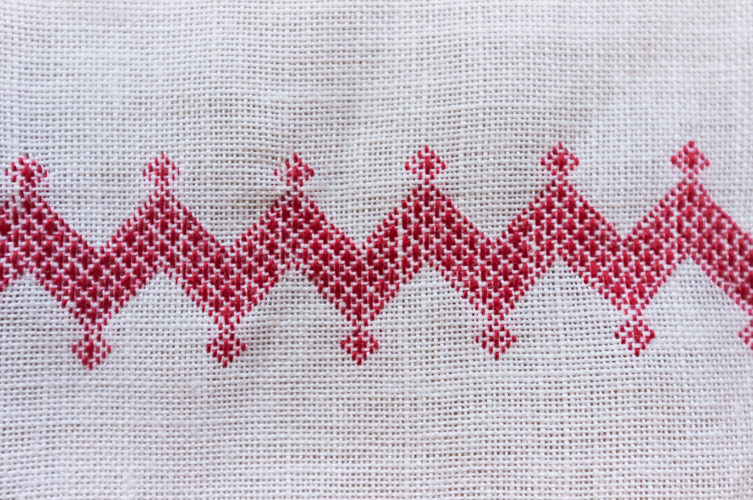 I am putting this project on hold for a bit. The finishing stage is to add picot edging and fringe. The directions in the pamphlet are not clear enough for me, and my brief google search hasn’t been fruitful. I made attempts on a scrap, but I just don’t think I am doing it the correct way. I am going to wait until my guild meets again so I can ask if anyone knows how to do these two things. That’s why I didn’t bother to iron it, sorry! But I will work up the other kit, which is Lin’s Egyptian Bookmark Design #4 and meant for a younger audience – more open weave and pearl cotton. It has a slightly different finish, but only time will tell if I can figure that one out on my own. 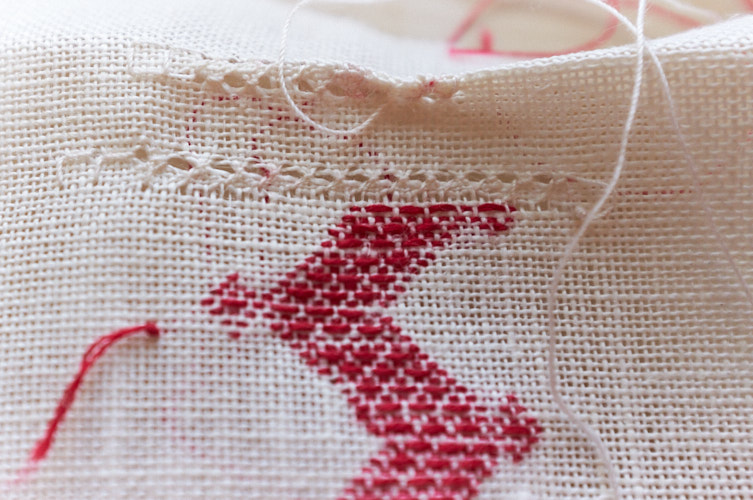