This post is a bit overdue as I finished this drawing about a week ago. The colored pencil course has been over for a few weeks now, but I didn’t get the last two projects completed in class so they became homework. I was able to finish this one up at Boy’s office during a lull. I wasn’t too keen on the theme, as this sort of thing really isn’t my style, but any practice makes you better, so I still put effort into it. Tom provided us a dolphin cut-out to speed along the drawing.

Here you can see the process of changing colored pencil into something that looks more like paint by using the simple product of baby oil that we learned about earlier. The sky is only about half blended with oil. 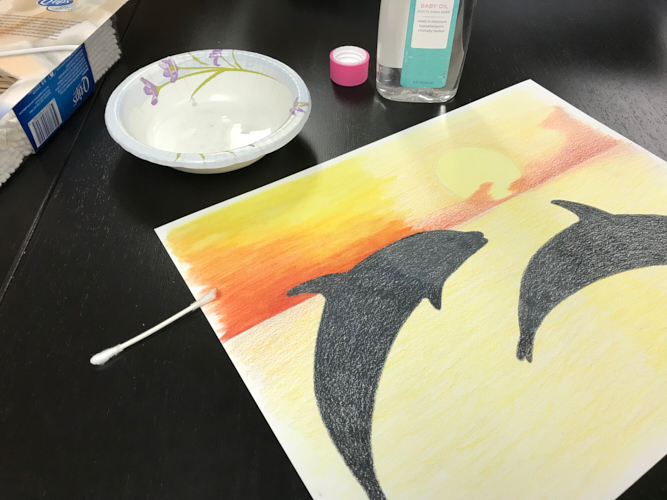 In this photo, the whole sky is blended with oil. The oil adds character; depending upon how you control it, you can gently blend colors or do a somewhat blocky/sketchy look like I’ve done here. 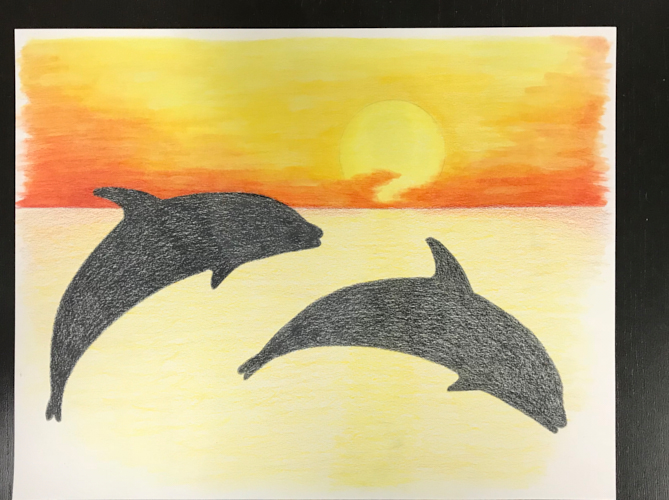 And finally, here is the finished colored pencil drawing, blended with baby oil. You can really see how it adds vibrancy and depth to the colored pencils. The black went from a patchy grey-ish tone to (mostly) solid black. 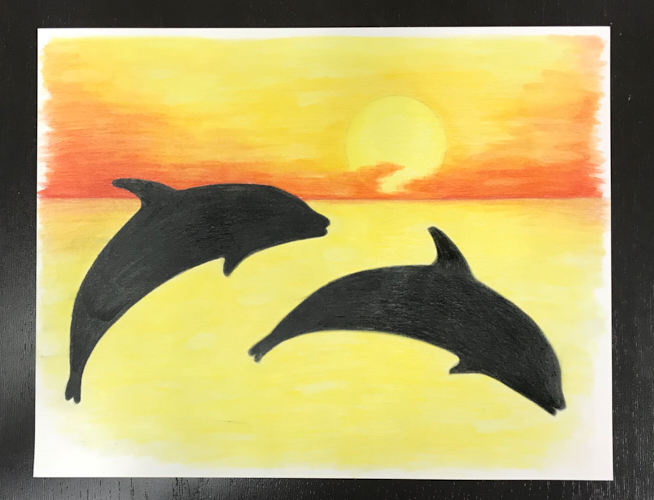 I learned a valuable lesson, but had made the same mistake on the last drawing of the course already: add black after blending other colors. When you look closely at this piece, you can see some smudging from it. I’m not sure when I will get around to finishing the last drawing, as things have been kinda busy, but I like the theme better and found its colors to be more challenging, so I do hope to finish it within a reasonable amount of time. Who knows if that will happen!

I must direct you over to Lysa Flower; she has been such a generous friend to me and I think ya’ll would love her! I’ve already made her match needle book and have been dying to try one of her foundation piecing projects so this cassette tape pouch was a no-brainer. She is definitely a girl after my own heart! Ahhhh, the 80s:) Let’s look at my cassette pouch, which this time looks a little English Cottage inspired I’ve now noticed: 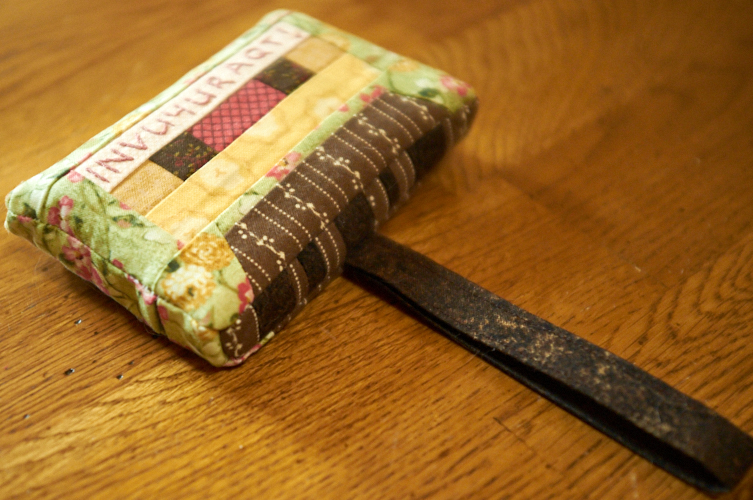 After letting me test the needle book pattern, she asked if I would like to test the cassette tape one. Of course I yelled “yes!” and was giddy with excitement, but I was also burdened by teaching and couldn’t sew anything. It was misery. I held on to the pattern though, and it was always at the top of my Creative Inbox for when I was ready. (I have many cool project ideas in that box and often wonder if my lifetime will be long enough.)

I was at first daunted by it because I have very little skill in paper piecing. Until this project, I had only done a butterfly from a Craftsy project – the Undercover Maker Mat, and a practice run with another Craftsy project – Rose Paper Piecing. I was so stoked to get started with the cassette after that but other things came up, and I didn’t have any sufficient space to play with fabrics with everything else Boy and I had going on. 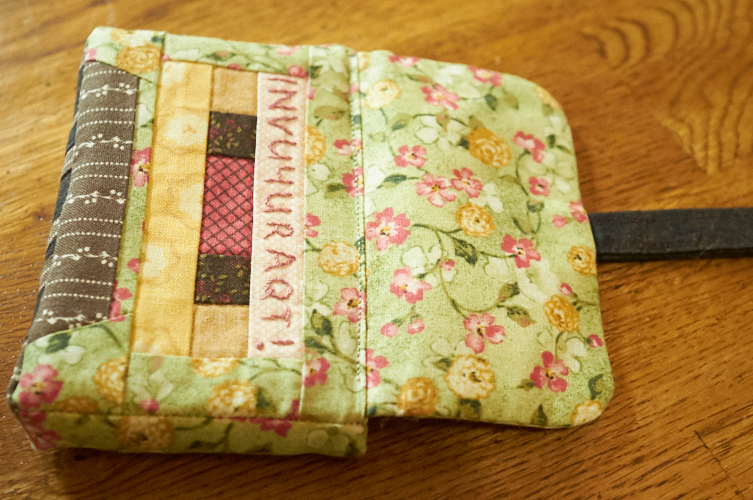 Then I decided that Boy and I rarely eat at the dining room table, which I recently inherited. It belonged to my gramma and grampa, and gets tremendously long with two full size leaves. I took it over. No food allowed! It is now a beautiful chaotic mess. I need to learn to be less messy as once it becomes this crazy, my creativity tanks. 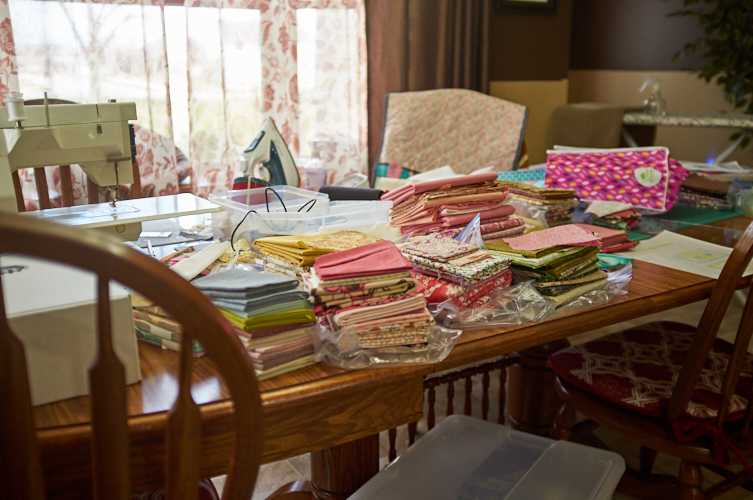 Well, anyway, I made many mistakes making my first cassette pouch, so I had to come up with my own ingenuity to try to solve them. I mostly succeeded but failed in one critical aspect: my MP3 player for which I built it did not easily fit. I did enjoy my additions though, so those ideas twirled around in my head for a bit until I had a chance to recreate it. 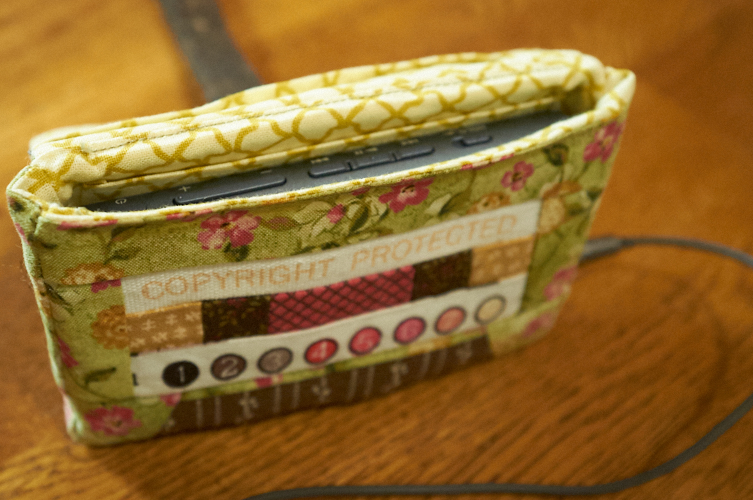 The first thing I wanted was a small pocket for my gym membership card, since this was the primary purpose of Boy getting me the MP3 player in the first place. The pocket is big enough to suit my ID and/or credit cards also if needed. 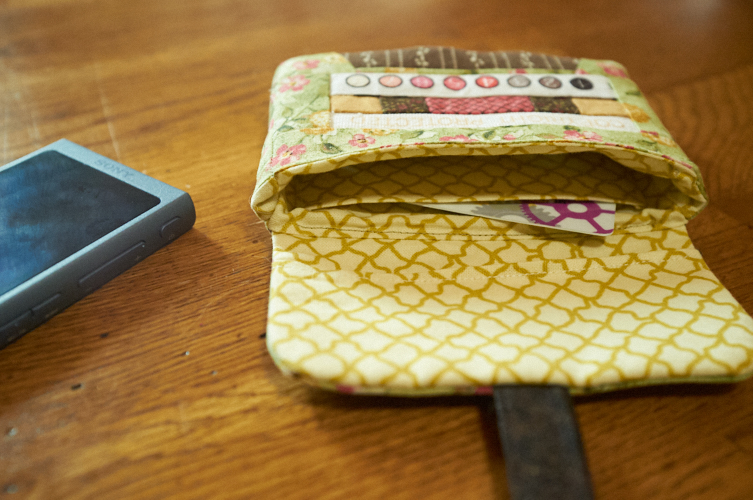 The original cassette pouch did not work in size because of the zipper. I attempted to negate that by removing the zipper but it was still an issue. Of course I could make the whole thing larger, but I really liked how small it was overall, and other than getting the MP3 player in and out, it was a perfect size. So I decided in Round Two to skip the modified zipper closure all together. In my first creation, I added a flap that fit through the “zipper” opening, so I widened it in this version to the full length of the cassette. 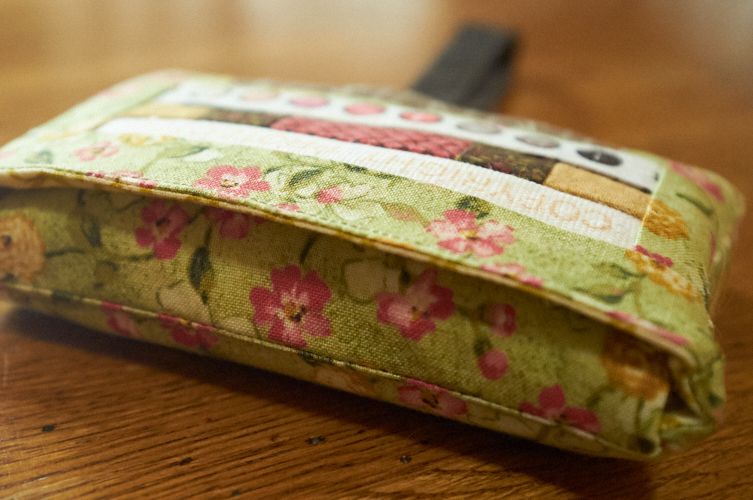 The first cassette pouch also had a cool wrist strap that doubled as a secure closure method and looked like unwound tape. Love it! So in this version, I tweaked it a little to be easier to maneuver. It looks more realistic in the original, but this way is better for functionality. The strap slips through a little hole in the bottom. 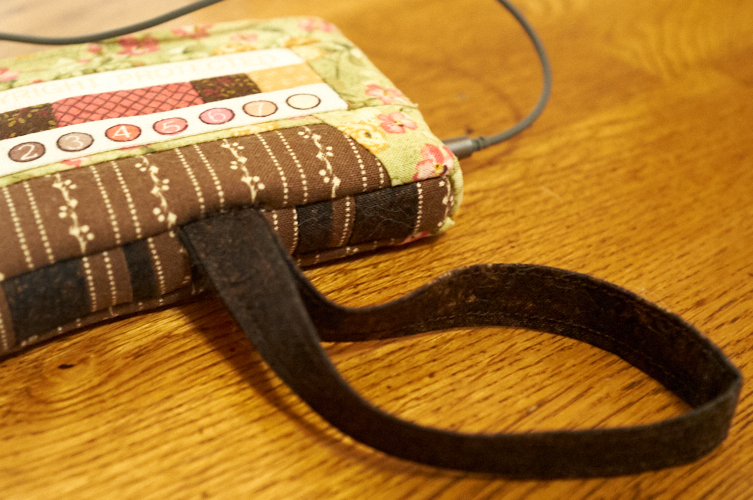 But if I don’t need to secure the pouch all the way, I can just fold it around the outside. 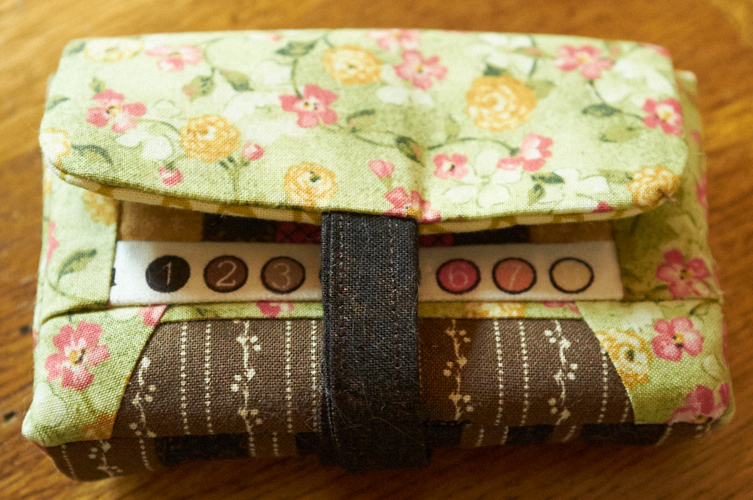 Because the MP3 player can connect to my car, I don’t always need the headphones out, so I wanted them stashed separately. This would also help with securing the wrist strap through the bottom, rather than the flap getting hung up on the cord. I made a secret pocket in the flap of the bag I made for my last Peru trip to hold a copy of my passport and some extra cash, so I employed that here. A side note: I still owe a post about that amazing bag! What?! (I want to make another so maybe now that I’ve spread my fabric wings again, you’ll see it soon!) 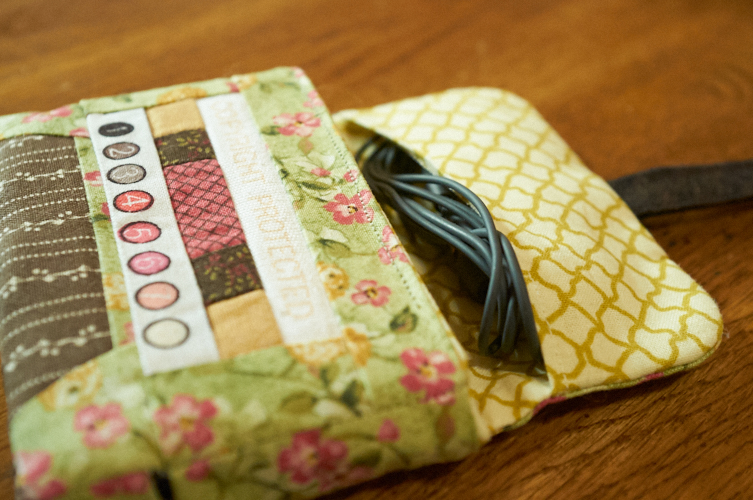 When making my first “prototype”, I wondered if I couldn’t add in a little hole for the earphones, so that the MP3 player could be protected in the pouch while listening to it. It was a lot of work, but I got it figured out! 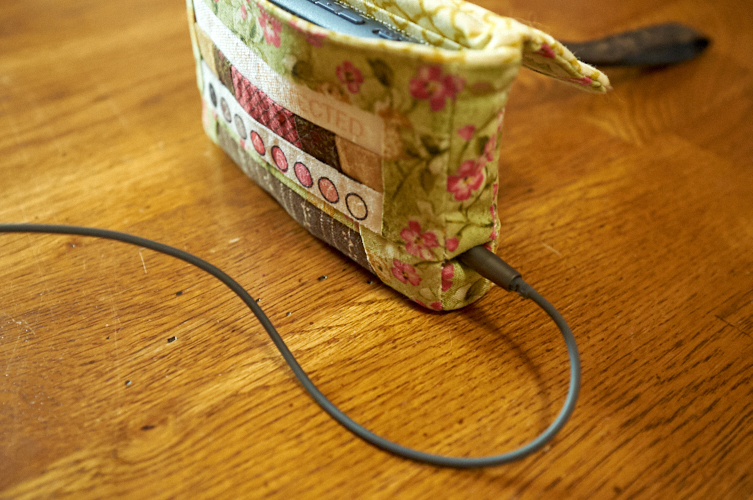 The image above also shows that the cassette pouch stands up on its own. I added two layers of medium weight interfacing for the flap, and for the pouch itself (front, back, sides, and bottom), I added fusible fleece lining for added protection. Boy’s well-spent money won’t go to waste should I drop my “boom box” (“boom box” is easier and more fun to say than MP3 player!).

Cassette tapes were fun because you could write on them and, duh, make mixed tapes. I decided to embroidery a little thing that one of my first high school crushes wrote me: INVU4URAQT. It took me quite a while to puzzle that out as I recall, and let’s just say it didn’t help quench the crush. 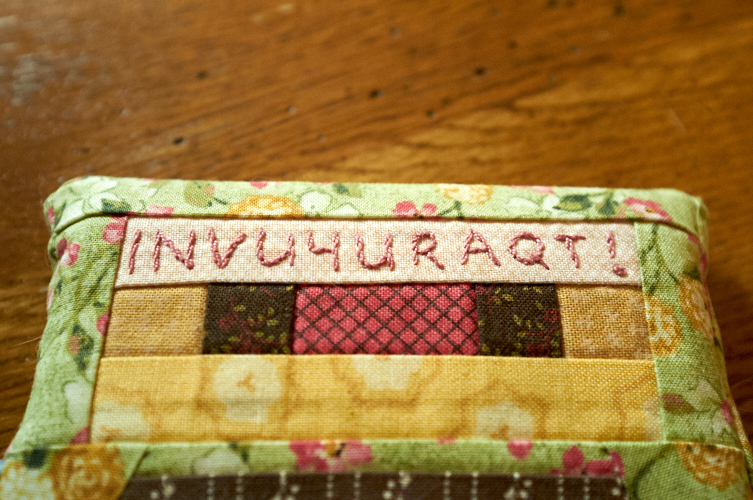 Lysa loves using selvages, as many sewers do, but most of my stash is either sans selvage or it just has a website or something, nothing like cool or cute phrases. But then I found “COPYRIGHT PROTECTED” and I thought, how á propos! Cassettes were the epitome of copying music! I recall cassettes also had weird numbers or something on them so I found a selvage with matching colors that finish it off. I thought about adding buttons to this side also, where the little roller things would be, but I decided against it. I knew this would go into a pocket more often than not, so I didn’t want anything to catch. 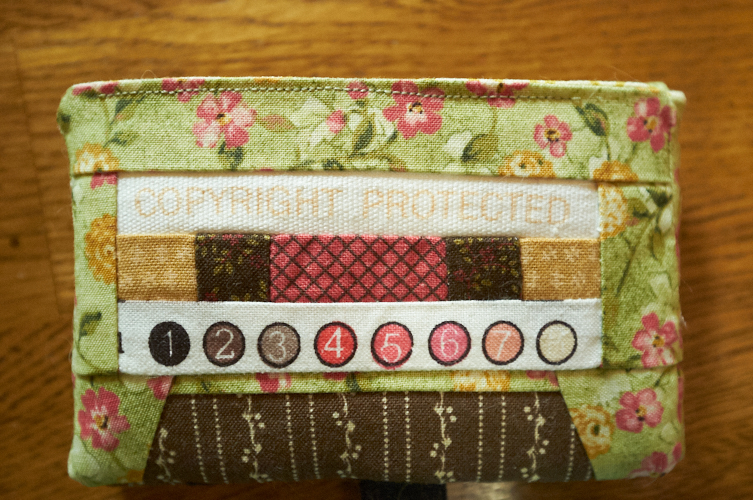 I love this little cassette pouch. Boy teases me that I love it more than his MP3 player gift. I can’t help it, it is such a clever design by Lysa and so perfect in its purpose. 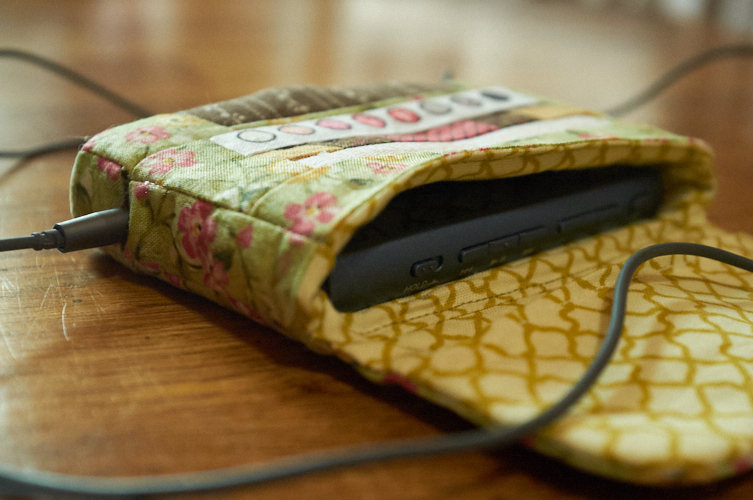 A couple of us went to check out Dragon Lights in Chicago, a Chinese Lantern festival. Traditionally, this is to celebrate Chinese New Year, but April is well passed that date. Boy took some great photos but it will likely be a decade before I ever see those off his camera. That is to say, you’re stuck with my phone pics! I didn’t take very many either because a) my hands were freezingly numb and b) I mostly toted around a 9 year old on my back once it got dark. Oi! 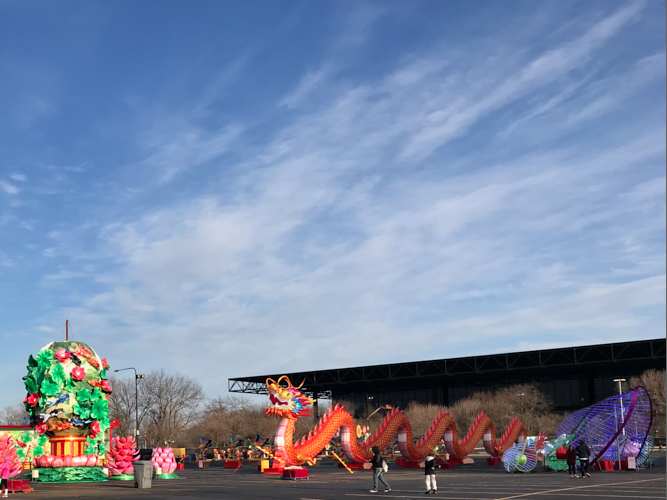 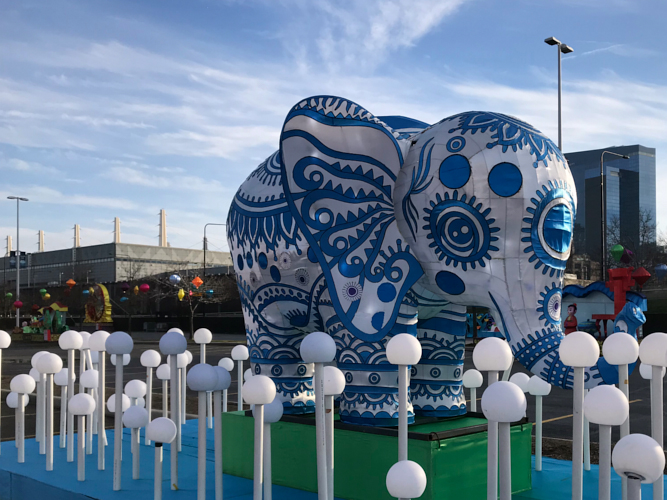 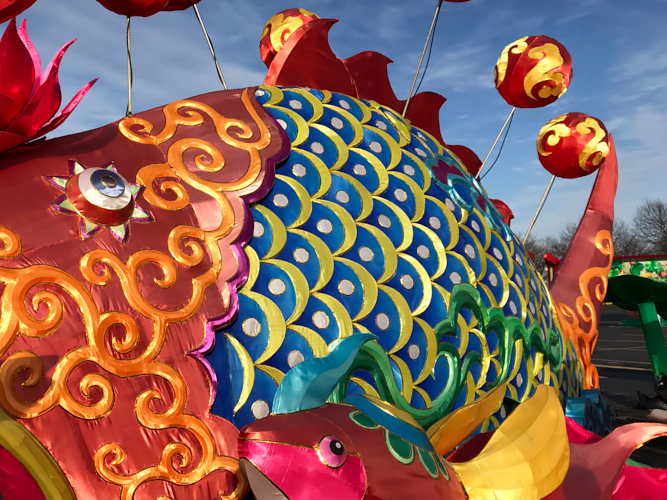 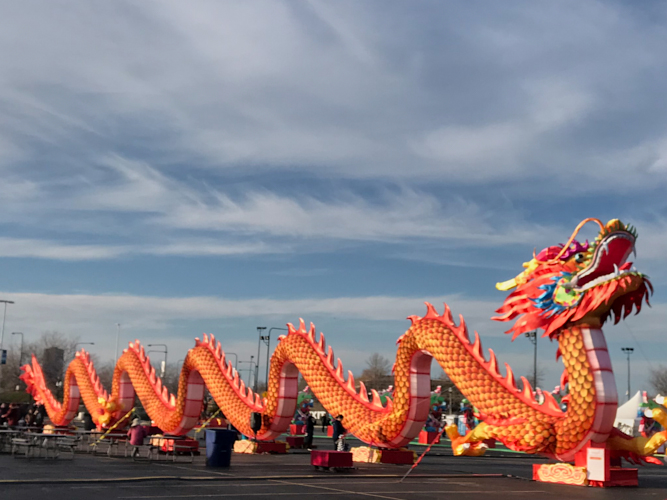 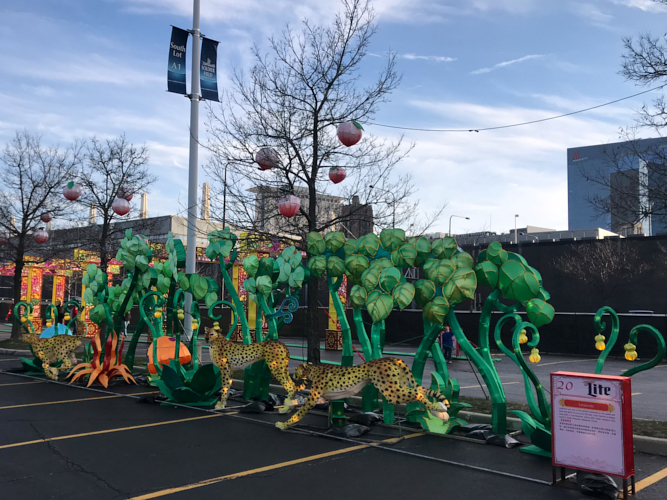 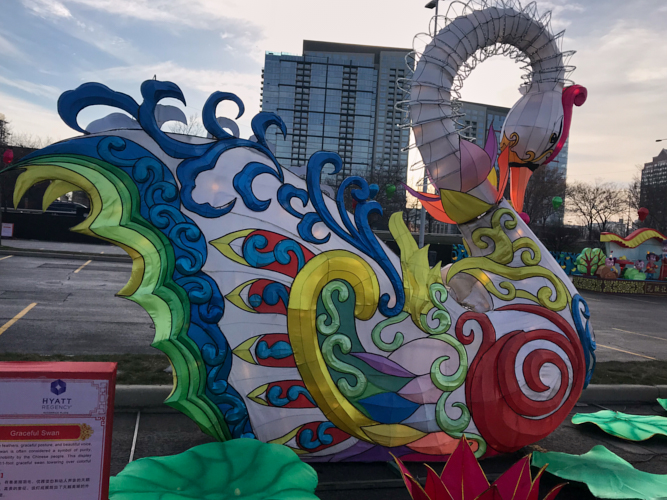 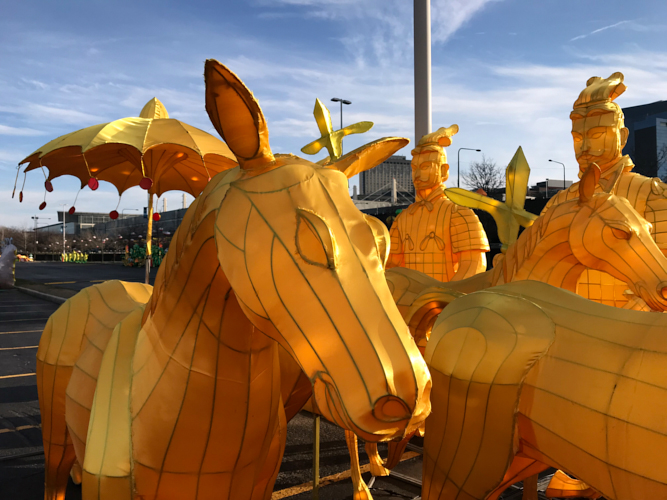 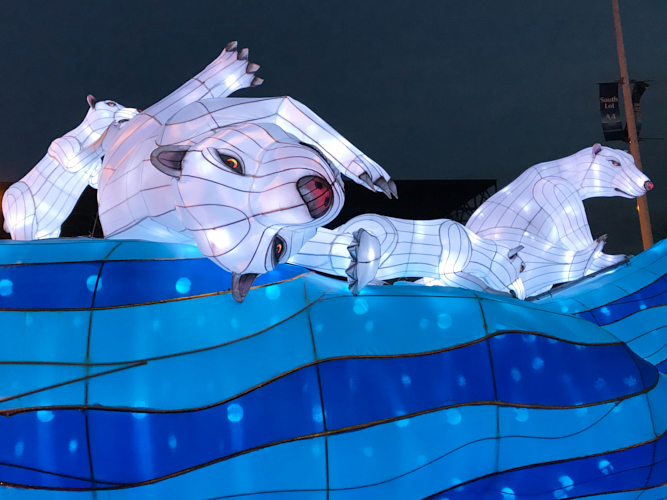 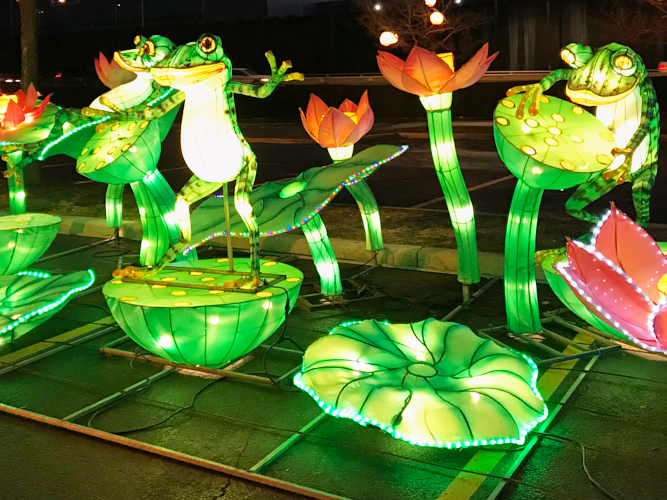 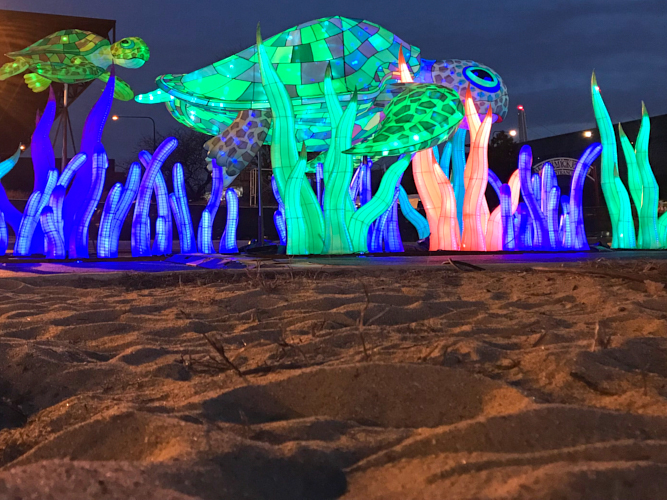 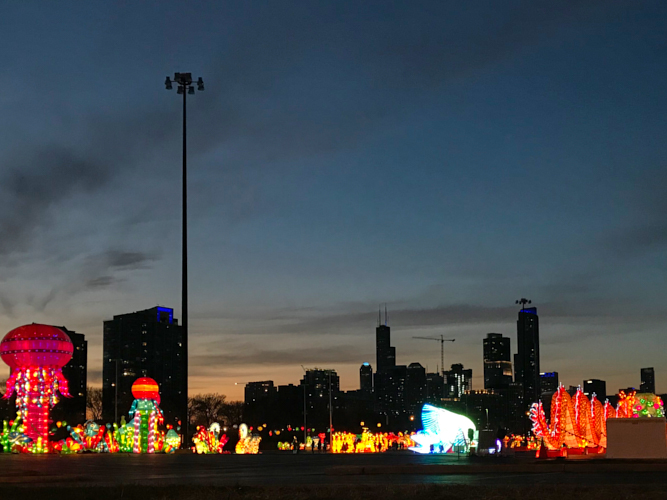 There were also performers! First up were two jugglers with Chinese yo-yos (if that is their proper name?). I couldn’t see them at the time because of the crowd. But then I got a good view for the contortionist whom was quite impressive. I’ve seen photos and probably you-tubes, but there’s nothing like seeing it right before your own eyes! Then a lady danced a unique peacock interpretive dance that I think had historic precedent, but the announcer/sound system wasn’t that great so I might have misunderstood. And then I was wondering what the finale would be, considering they already brought out a contortionist. But they did it right – the Face Changing show was awesome!

Would I go again? I loved the idea and concept but a couple of things were off-putting. The biggest issue is that there was a single food booth, which meant a very long wait line and also it only had maybe 3 Chinese options (orange chicken and Mongolian beef, both over rice, or pork bao buns) and hotdogs or popcorn. Pork buns, which I ordered, were 7$. Sort of expected for festival prices, I guess, but also not because the rice options were 8 or 9 bucks and actually were a meal. I expected maybe four buns at that price, but instead I got two and they were quite tiny. We also expected more booths to purchase things or to watch cultural illustrations like calligraphy or maybe playing musical instruments. I think there were maybe 4 or 5 booths only and all of it was small festival-type trinkets (that aspect was not unexpected, we just thought there’d be more stuff). The lantern show itself was clearly set up for larger crowds, and although we went during one of the warmest days yet this year (which was perhaps only a few degrees warmer than seeing your breath, ha!), there were very few people. I enjoyed that tremendously, but it did mean a lot of extra walking on hard pavement which at times felt exactly like what it was: a parking lot. I also was not impressed that we weren’t allowed to leave and come back; we arrived at 5:30 not knowing what to expect, and had to wait until 8 for the sun to go down. Being able to sit in a warm car for a while sure would have been nice! I do hope to see this festival grow its roots a bit, though, as I am glad I got to see it, even if it was pricey (and cold!).