I made a little potted garden of mini felt cacti! I set out to make them for Boy’s office, but then people caught wind and wanted some;) You might remember from last week’s WIP post that I was using Delilah Iris’s Cactus Plush pattern. I added bead melon’s to some of the cacti, and tiny gravel to fill in the pots. Now also, one of these cacti is not like that others! The one on the left is from another generous blogger – Wool Felt by Benzie has a free Felt Cactus DIY pattern. I simply shrank it, adding embroidery to match the others. 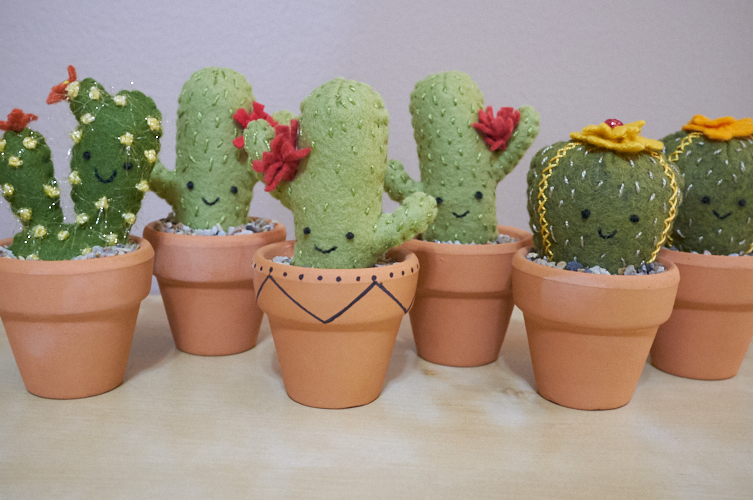 I first made this tall cactus. Then I made a second, and decorated the pot. Actually, I had to make two cacti, because I cut the felt out and then stitched two fronts (rather than flipping one around to stitch the back). That is why two are identical, but one is reversed! Ha! And then I had a request for them both, so I made a third and added a bead melon. I don’t know anything about cacti, growing up at the edge of the Eastern woodlands and now living in the Great Lakes region. Maybe this kind of cactus doesn’t grow melons. ¯\_(ツ)_/¯ And should the kawaii faces ever fall out of favor, any of these mini felt cacti can be turned around for a more “realistic” look. I chose not to decorate other pots – I like the idea (I only used a sharpie) but Boy wanted his plain, so after my experiment, plain I did. 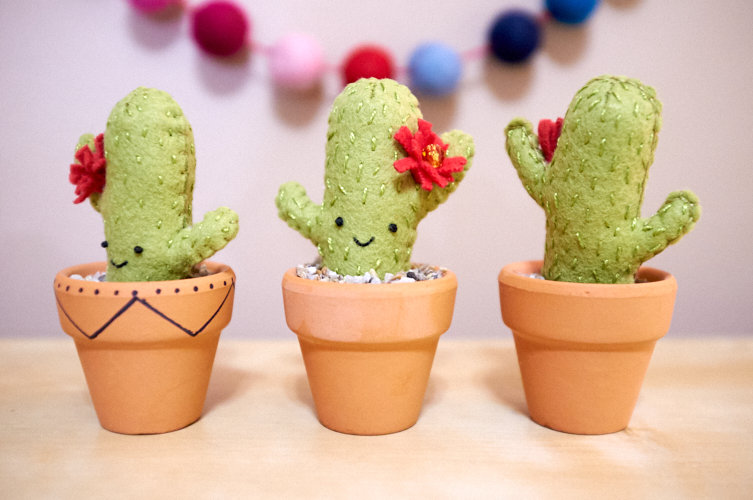 I made one of these prickly pear types, and stuck some french knots on top of my first go, but then changed that to a bead for the second. Maybe this kind actually has a melon, or pear, hence its name? I know; I could google these questions, but haven’t yet. 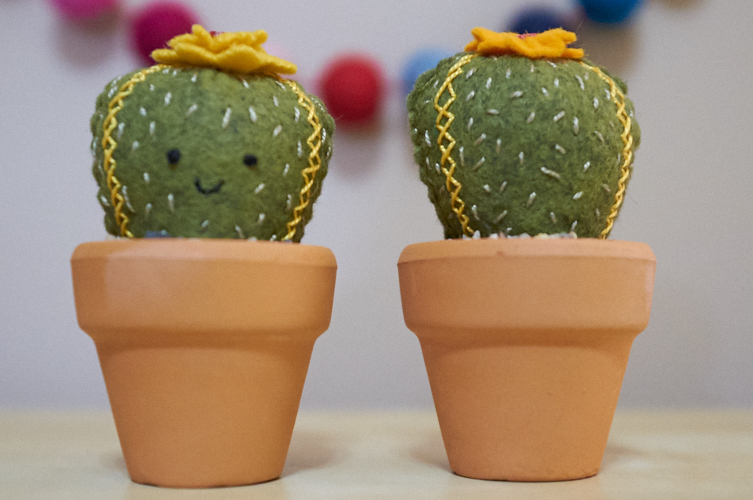 And then this cactus… I knew it would be Boy’s favorite, and I was right! I printed the pattern at 50%. Rather than using glue dots as the pattern suggests, I made colonial knots from a specialty thread I picked up during my last work trip to Daniel Boone National Forest. Boy hated that thread when I first showed it to him, but he is eating his words now;) 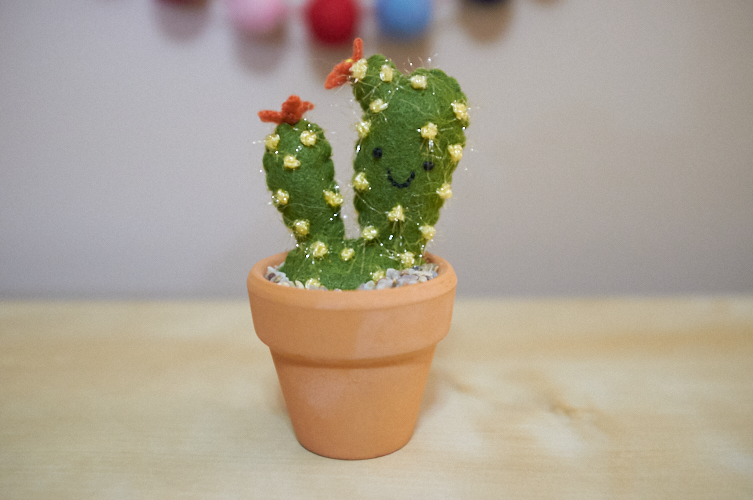 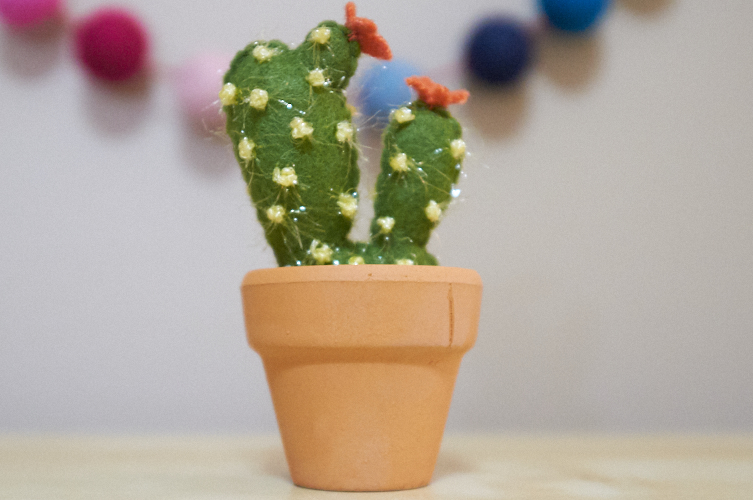 I think adding the gravel really makes these mini felt cacti fun. What do you think? And I also noted that while I made all the cacti bodies out of my Wool Felt Central felts, I made the last set of the three’s flowers out of felt I got from Sue Spargo (remember my butterfly pillow?). I liked that felt much better for the flowers – maybe because the texture is slightly different and therefore stands out. 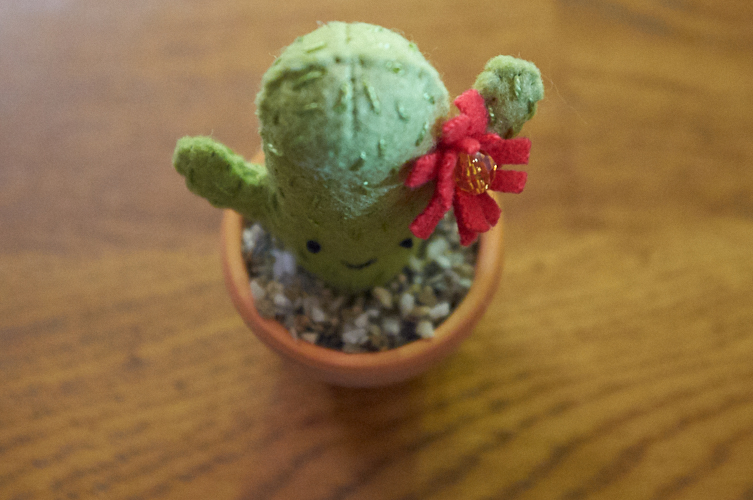 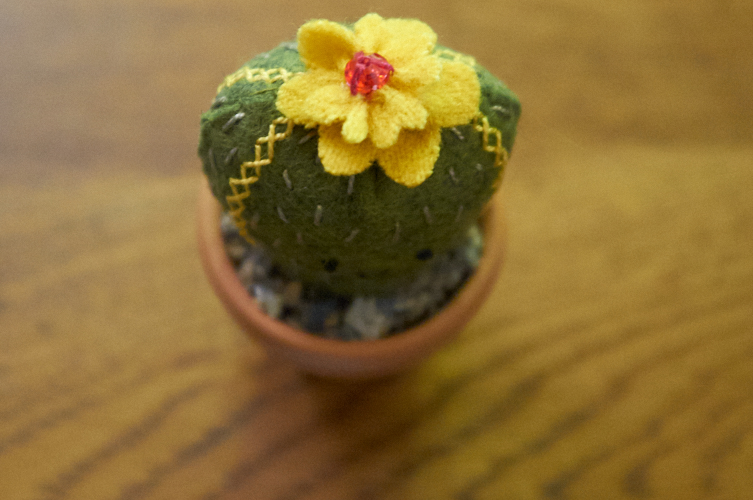 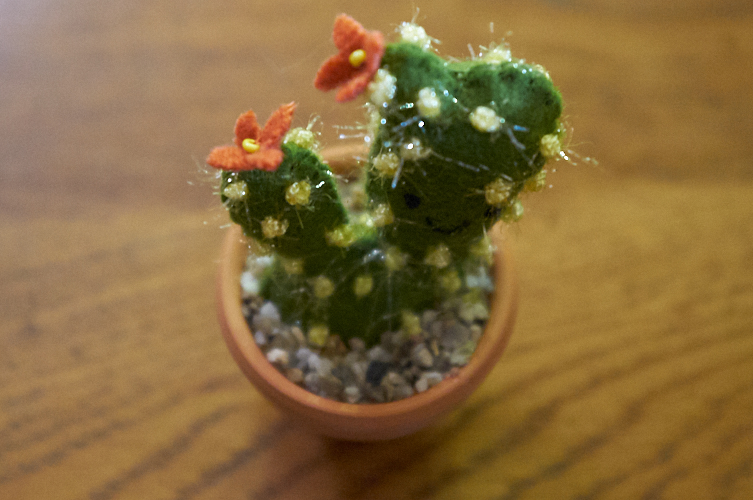 Now, these mini felt cacti are exactly that – quite small! Here, you can see me holding Boy’s favorite: 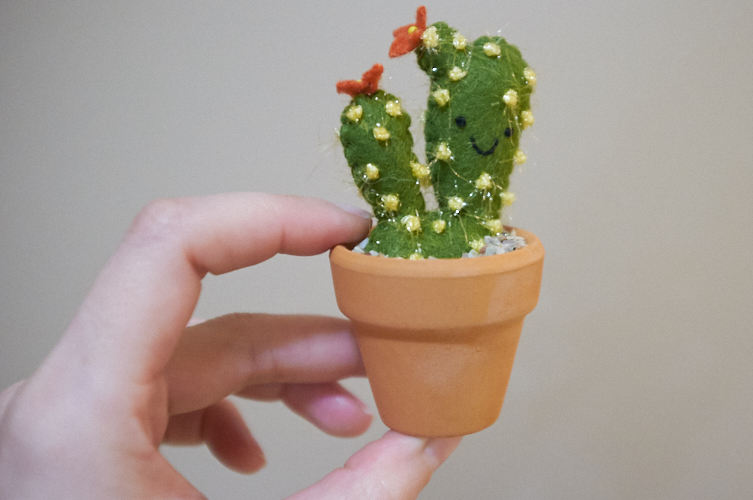 And here is a serendipitous shot of my cat for scale – she didn’t want to cooperate for a cuter photo, but she sat there on her own just long enough for a snap before trying to knock them onto the ground. Cats. 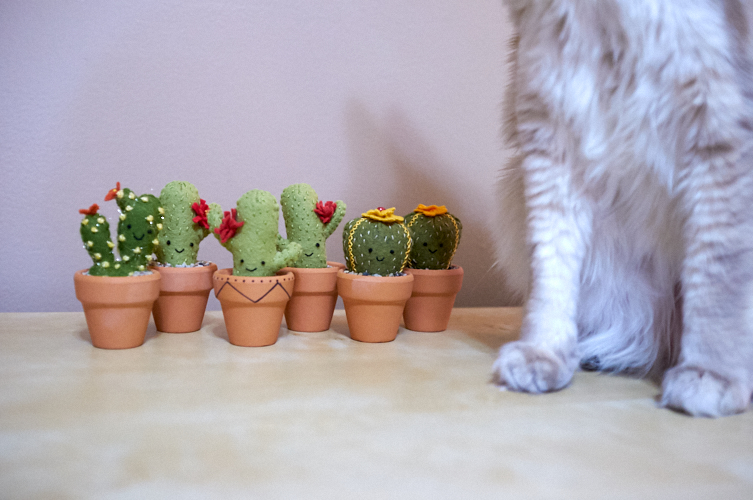 For my embroidery guild ornament exchange, I decided to make a Little Lark – Gingermelon Dolls makes the cutest little plushies, and she is so generous to offer some patterns for free!

To test out my skills and the pattern, I started with a fabric I really liked and then chose coordinating felt colors – you saw that in a previous WIP-TAST-ic Wednesday post. Though I ordered doll eyes, I knew they would not arrive in time for the holiday party, so I dug around and tested out a pair of buttons. They are quite larger than I had hoped, but I think the little lark turned out just fine! I sewed the year on the back with a tiny patch of fabric just to liven it up a bit. 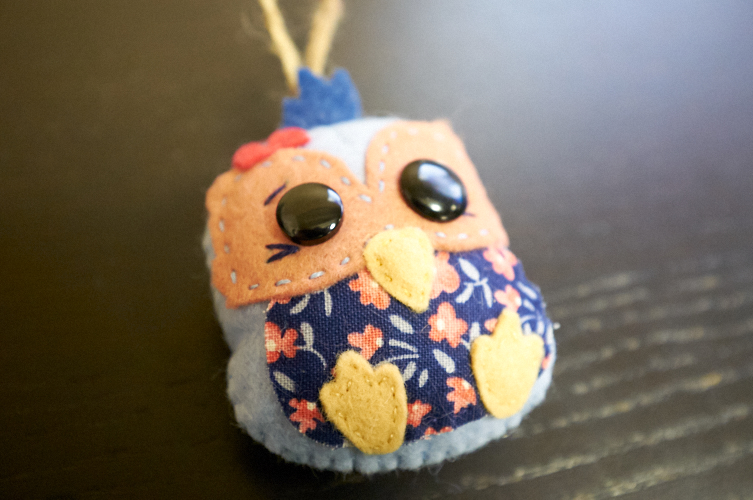 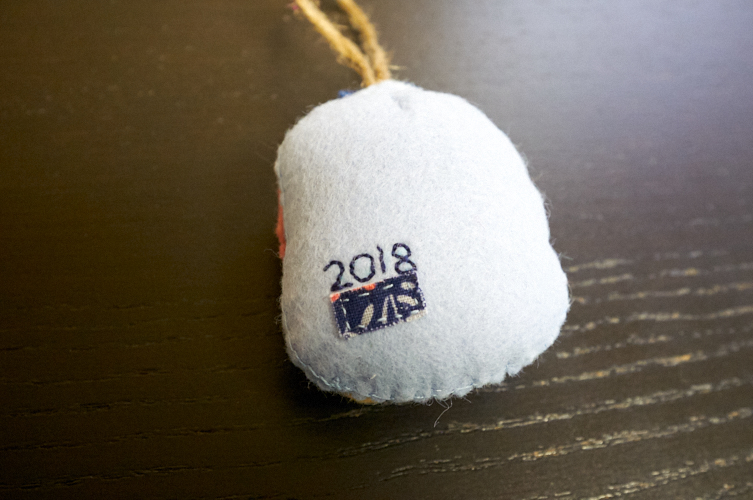 Happy with the results, I embarked on a journey with a little bird for the holiday exchange. I am not traditional, so I knew it wouldn’t be made from reds and greens or de facto Christmas patterns. I searched online for other color theme ideas and found this image: 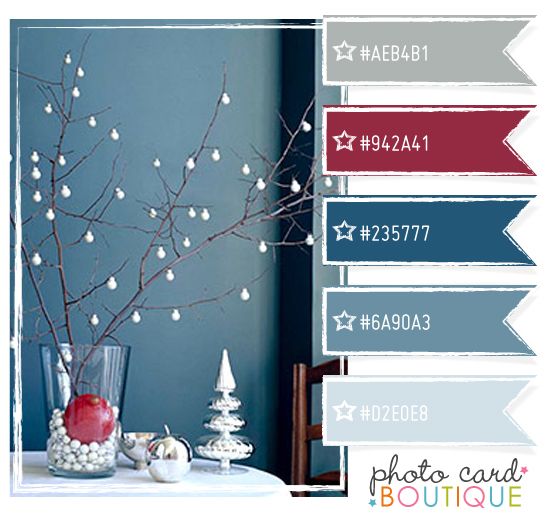 However, I was left without exactly matching felt choices. And then also, the other two buttons I found for the eyes were actually even larger than the ones on the first little bird, so they looked silly. The best I could come up with was the two buttons you see. In the end, I feel like this little birdie looks more “primitive” than “holiday”, but that’s quite okay because the lady who won it absolutely adored it. Yay! 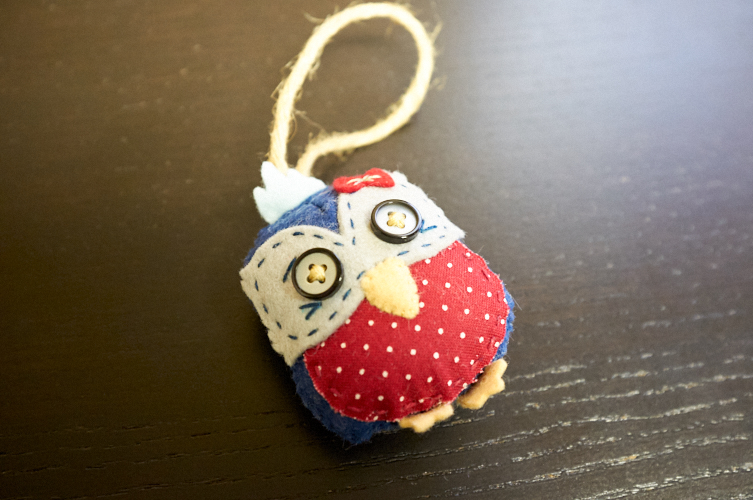 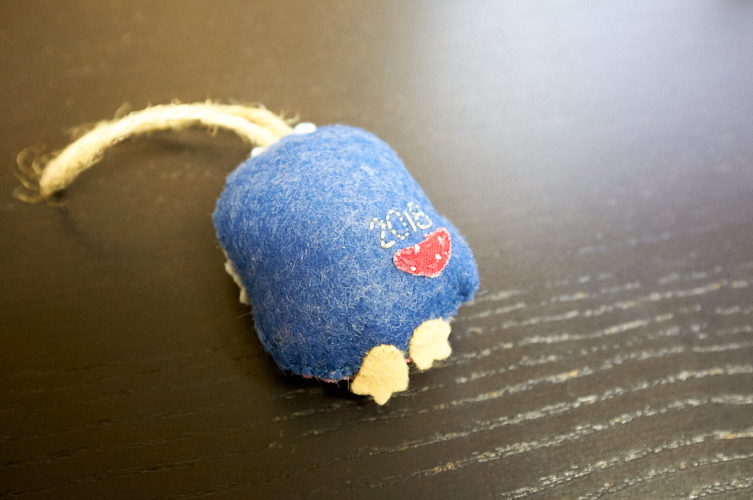 At this point in the game, I wanted to make a little bird for so many people. So, once again, I began with a fabric I liked and matched felt. I was still frustrated not having the ability to use doll eyes or good buttons, and then WHAM! It occurred to me to check my bead box. These little gems turned out to be my favorite kind of eyes – and the good news is that I have more! 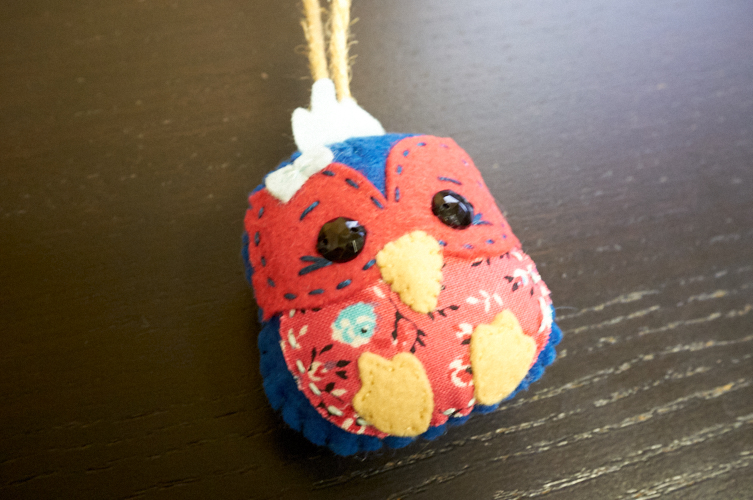 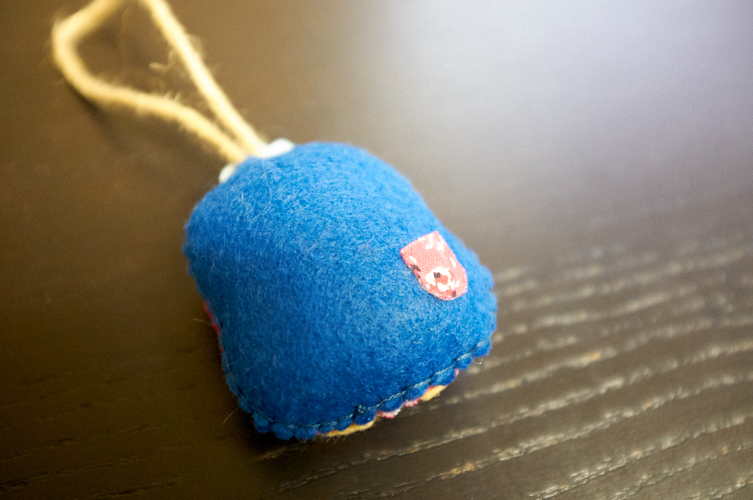 The bad news is … I got bored making them so I am not sure anyone else will receive one (this one is pegged for my nephew’s significant other). I do this with everything and I have a love/hate relationship with that part of myself! I could never craft for money because of it, but it keeps me exploring and challenging myself and learning new techniques!

Brrr it is cold out there! This week’s Works in Progress do not include TAST, nor has there been progress on my crazy quilt block, but I do have things to show!

I needed to make something for the ornament exchange with my guild. I will write about that in another post since I completed it and made two more! What!

That project had me bust out all my felt, so then I decided to see what else I could make since the mess was already all over the room. I found an adorable pattern for little feltie catci by Delilah Iris Designs. The middle one still needs a flower, and then I need to find the miniature terra cotta pots, but Boy has already claimed two for the office, and my friend just moved so it will be a housewarming gift for her. More when they have their little potted homes!