We don’t have television stations: no cable, no satellite, no box for local programming. Nothing. This is a choice for us because of a slew of reasons (namely he hates superfluous shows and I hate the general media and its hold over the world). Over the years we have missed out on a few things here and there but Netflix and the internet has rescued us on some occasions, albeit late in the game. However, I really *really* wanted to be there for the premiere of HBO’s Game of Thrones, based on George R. R. Martin’s (unfinished!!) series. Luckily, I know people with stations;)

However, the tragedy unveiled itself Sunday when both Boy and my television program owner Katie felt under the weather. Actually, it didn’t bother me much because I haven’t seen it yet to be completely hooked and I am looking forward to a back-to-back GoT party next round:) This is a patience one learns only after forgoing the power tv holds, I know.

Meanwhile, my bro and Luci are representing me in New York: 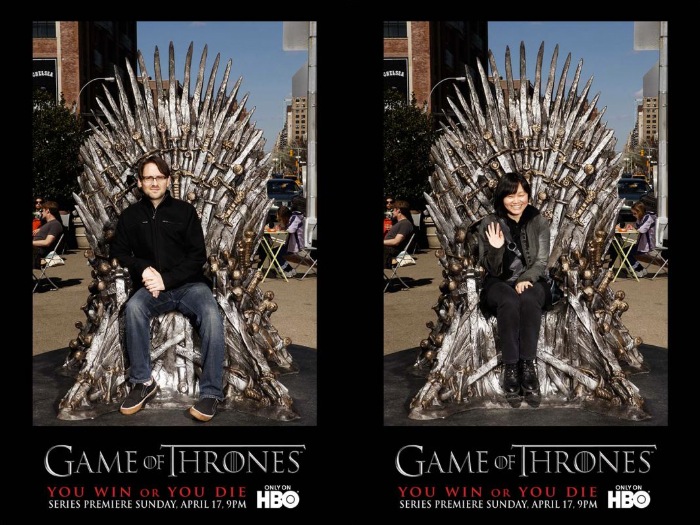 Did you watch it? Was it evilly twisted and full of drama?? Was it awesome?! I hear they are making deals for season 2 already. (I’ll not go on about how I’ve been waiting for YEARS for the series to be finished, George, because I know you know that, duh. I just hope the involvement you have with the television series inspires you to finish them rather than impedes on your time to do so:)