Now that I know a little more about making the pattern for the guinea pig, I decided to make my brother’s a different way. Same idea, but instead of having a spacing piece along the top of the body, I made one for the bottom. I wasn’t exactly sure of the shape to use, so I sewed it on before I cut it. It bows out a little on the bottom, but since I didn’t stuff it completely full, I can manipulate the stuffing enough to make it sit well. The front legs aren’t separated as much as I envisioned, but its way better than the one foot-look of the original. 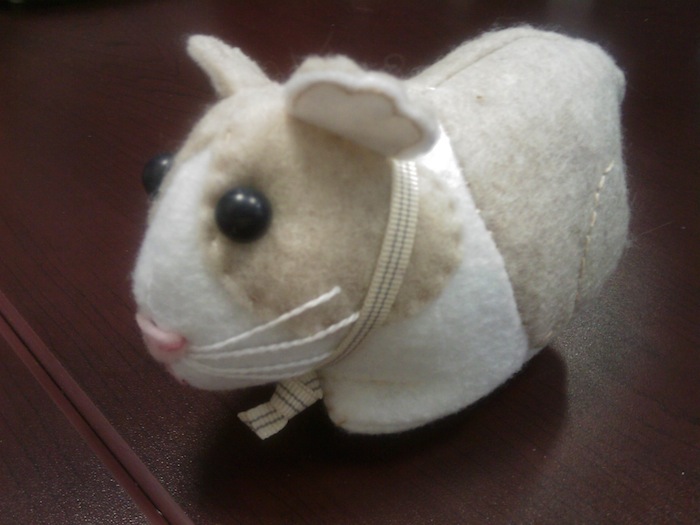 One small difference I made was that I sewed the bottom of the ears together and then reversed them so that only the outside of the ear, not where it attached to the face, had a rough edge of white. It also gave the ears the appearance that they were stuffed, because of the felt seam allowance left inside.

I also was able to hide my knots better because I knew what needed to be done before I sewed the whole thing shut, and I was able to hide a lot of end knots where I put the nose. I also altered the shape and size of the nose. On the original, I made the nose come down to include where the mouth is, because the pink area seems to be that way on real guinea pigs. However, it just looked odd, so on this one, I ended the nose (it was a simple triangle) and then used the pink thread to carry it down to the cute little mouth.

This little pig turned out so much better, and I can say that I am happy with all the results. Even if I was sick once while tackling it and without paying attention, had forgotten that I wanted to use white thread on the white areas, rather than the tan, and so had to remove all the stitching and start over. Yes, even if I sewed the ears on the face spot backward, and therefore the face spot itself backward, and had to remove all that stitching too. Even if.

I also added a little personal note at the bottom, a reminder to my bro, and a message that would explain why I chose a guinea pig. It reads “Now, being 30 is a story!” because a) it is his birthday gift for turning 30 and b) it was made in the likeness of his late guinea pig, Story.