Fabric Mutt has a tutorial on making what she calls The Pixie Cup. It caught my eye for something handy that I could store my wonderclips in, so I set out to make the small version. Only …  something happened, and I went off the directions and had to kind of make it up as I went. I blame an engrossing episode of TV. Normally, I craft to what I consider B-rate shows so I can focus, but something about that episode of Once Upon a Time distracted me I guess.

Well, anyway, I was excited to embark on my first patchwork project. I had purchased a mini charm pack of Moda’s Into the Woods during my 2016 Illiana Shop Hop. The squares are 2.5×2.5 inches which seemed really tiny so I wasn’t sure what exactly I would do with them. But then I found the Pixie Cup!

So, I was suppose to only need eight small rectangles, but I ended up needing 12 because I sewed them on both their short and long edges rather than just on their long edges. And so I had no idea how big to make the circle, but as luck would have it, my “cuff” (since I went ahead and sewed the edges together rather than following the pattern) fit perfectly around a candle jar I had, so I used the jar as the measurement rather than messing around with math. Phew! (And, I can put the finished basket onto the candle jar to iron it – absolutely awesome accident!) A tweak in measurements for the batting and liner, and I was set.

Rather than using fusible interfacing and linen, I used a very stiff canvas or duck cloth material (sorry, I don’t know exactly what it is – I just had some in my stash). This helps hold the shape wonderfully and it doesn’t look all loose whilst empty (not that I expect it to really ever be empty).

It is the perfect size – somehow it is still just about 4 inches in diameter, but mine turned out to be about 3 inches tall. I love the leather handles. I only had some pretty thick leather on hand, but thanks to my recently acquired and magical walking foot, there were zero issues!

I had two more (free!) mini-charm packs from the shop hop loot (Moda’s Alice’s Scrapbag and Moda’s Petite Prints Deux), and he requested some patterns that were alluding to a Japanese theme. This is the best we could do. Rather than quilting in an X-pattern, I zigzag stitched the ditch, deciding that would be more “masculine”. He approved.

And would you look at how sturdy they are? They neatly stack – whatever that stiff canvas stuff is I used is awesome for this type of project! 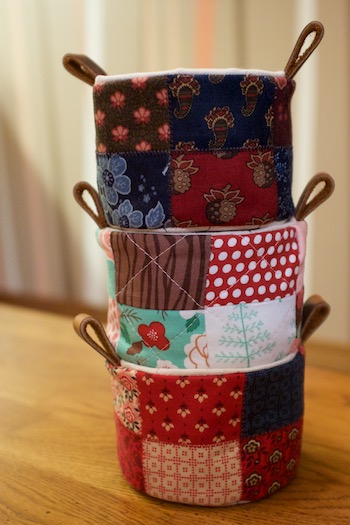 I can’t wait to make another… though for what purpose, I don’t know! Thanks, Fabric Mutt:D