Ok so I compiled a list of the games we currently have. And boy, do we have a lot! We will be getting rid of some of them, as we have discovered they are not that great, but i was surprised to find out how many we had with high ratings at BoardGameGeek.com.
We dont get to play that often but I do intend on giving a run down of the game when we do. Until then, here are the games we have, in their current “geek rated” order:

And we also had a few unrated games:

And then there are also games that I didnt find in my initial search, Im sure.

Recently, Boy gave our sis-in-law Agricola for Christmas so we have only played it once. It is rated number 3 though, and was fun once we got the hang of it. I *hate* that first part of learning new games (thankfully, Boy will read the entire instruction booklet prior to playing). This is due to the fact that i am impatient so its primarily for the wait time between my turns. And then of course, it usually takes two or three times to work through all the rules. But I have learned to not hate games right off when they seem so complicated. So as far as our first experience with Agricola, I would love to play again. The rules make sense and began to stick by the end. There are also so many different directions you could go to compete and change it up each time. Do you farm? Do you raise animals? Do you build a mansion? Do you do a little bit of everything? And there are cards that can change things up quite a bit too. Plus, there are rules to play the Family Version, which simplifies it so that kids can play too. How cool is that? 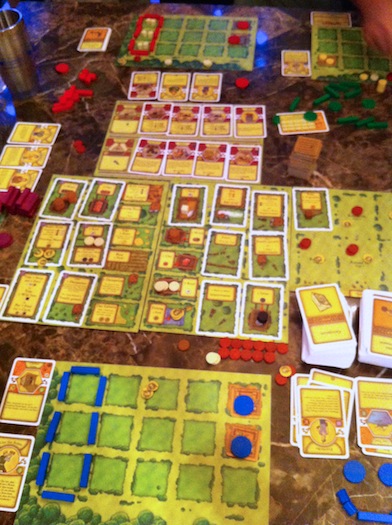 So, speaking of games, what is your favorite?

Computer news: The power adapter for my laptop snapped in two and the battery is officially dead now. I have some posts to make but the computers i have available arent my flavor – they are a little too much on the unix side to deal with photo editing and such, if you know what i mean. Im a simple girl. I like my mainstream, pretty-looking programs:P (Boy has ever so graciously provided his itty bitty KDE laptop, and something called Fluxbox – one without a full size screen and one without a full size keyboard. Ugh. Its silly isnt it? Computer dudes spend so much time building the most powerful machines and then they stick these near useless baby keyboards or monitors on them. It reminds me of body builders with pin heads.)

Fun news: I am THRILLED that i won a Sew Mama Sew December Giveaway! I entered Made By Rae’s Falalalafabric Giveaway and scored the Pink Kelp! Yay! She was also kind enough to post all the winners photos up so you can see what we made with her patterns or inspirations.

Cat news: Although Sashas gingivitis is under control with the simple treatment of the rinse she completely detests, her front gum still looked really horrible and her top second incisor tooth was hanging out so she always walked around with her tongue out. She otherwise acted normal and ate fine but we finally decided to take her in. The doc said it was an absorptive lesion which is common for the front teeth and pulled it right out with barely a wince from her. (He let me keep it since i do love bones and teeth and it is so teeny weeny!) That evening we noticed the tooth next to the missing one now was crooked, as if the only thing that had kept it in place was being wedged by the missing tooth. About three days later, it looked horrible and moving all around and this time i could tell she was in a bit of pain (if not a whole heck of a lot of it). Boy and i held her down like the doc and his staff did and she didnt even flinch or nothing when we pulled it out (holiday time = no vet hours). Nothing at all! My fears of being a torturous cat mom was laid to rest. It was amazing. (And an even tinier tooth!) And just the next day, all the redness was gone and she is back to her old self. Happy cat!

Kitchen news: I dont really have much to say. All the electrical is finished and we have canned lighting now, yay! Boys dad and uncle did that for us on Christmas Eve, of all days. Boy and i just need to make sure all the nails are gone for the drywall people, get a few more rolls of insulation, and then get the stove and sink/dishwasher out of there again. We are dillydallying a bit on that last part. As much as we are sick of this whole process, going back to paper plates and microwaved food just isnt appetizing, but of course its also because last weekend and this weekend are holiday weekends. Even weekend warriors need a break. Oh, and i have made the executive decision to take out the “linen closet” around the bend from the wall we had the contractors work on because it really doesnt hold a folded towel well at all (its not deep enough). Instead, I am going to make it a built-in book case with cabinet storage on the bottom. Im pretty psyched about that idea. I dunno why.

I hope your holidays were/are fun and not met with busted technology!

If you missed it, you can read about the creation of the fabric family tree. Im super thrilled to finally get it framed. 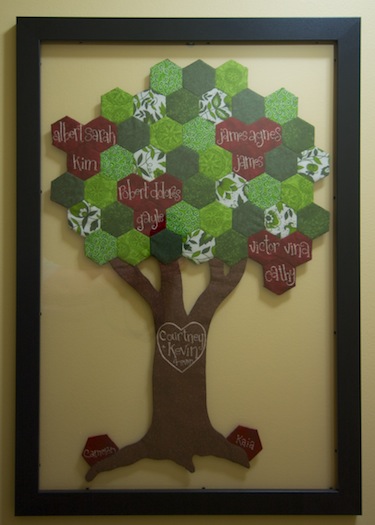 I ran into a slight bit of a problem as the size I wanted was 16 x 24, which is not standard for photo frames. It is, however, standard of poster frames but poster frames do not come in the “floating” style (nor are they glass, but Ill take what i can get). I ordered two as a quick way to put it all together, instead of finding plexiglass for the backside elsewhere.

I was prepared to work with tutorial at How Does She? to make my own floating frame: Floating Frame Tutorial. But i lucked out because i was able to use both plexiglass pieces in one frame without any hotglue or other additional work. (The jury is still out on how you can see the little tabs though …).

Its been delivered into the care of its new owners, yippee!

And now I have a frame without any plexiglass but Im not deterred because “empty frames” make cool art. For instance, Make It and Love It shows two project ideas just for the holiday season: Christmas Wall Vinyl and Simple Christmas Decor.

What do yall think?