I just wanted to note that Jessica from ALLFREESEWING.com contacted me a while back about listing my book cover tutorial on their site. I gave permission and am thrilled with the amount of people checking things out!

Don’t forget to share your photos with the rest of us at http://www.flickr.com/groups/fabricbookcover/ :)

On a different note, grad school is kicking my ass so theCrafties is taking a side seat for now. I hope to get things worked out and back to quasi normal after I get caught up (boo for late shipments on books!!). Remember that if you would like to follow my grad school adventures, you’ll need to email me because I will not be linking the site here.

I hope you experience great crafting days ahead and continue to share so that I can live vicariously through the internet! 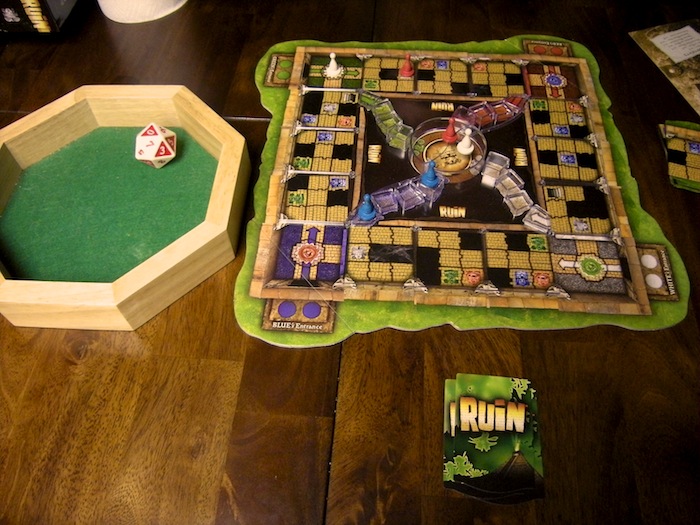 Learning curve: This game is pretty simple: you roll a dice to move. If the number is red, you also get to change one of the cards that make up a fully interchangeable game board. There is a special card in the deck to either help yourself or hurt another by jumping halfway across the board. The idea is to get both your pieces to the center’s “treasure room”.

Re-playability: Because the game board itself is malleable to the players’ intentions, I think it always offers a good bit of competition.

My personal thoughts: I had never heard of this game before, but I got it for my birthday. I was surprised to see how low the game was rated after playing it. We laughed as we played, and none of us would choose to never play it again. It was a good time, and quick paced. Oh, and I won :)

Before:
Angela gave me a pot pie filling recipe from her freezer recipe book. It is the same recipe she used when she made me a pie during our renovation. I made enough for six pies total and froze five in freezer bags. I found a recipe for the crust which sounded good: Butter Flaky Pie Crust. To my unrefined brain, butter and margarine are the same so after the fact, when I realized this flaw, I already felt like the recipe was ruined, but I let it sit in the fridge overnight anyway. Then when I began to roll it out, I realized it was not going to be enough to cover the top. As I was contemplating on what to do about that, I also realized that although it was rolling out nicely, contrary what some of the negative reviewers mentioned, it was not so nice on the bottom side. Wherever the flour was missing, the dough just stuck like a gob of wet rubber cement. I tossed it out.
But I was hungry. So I found a quick fix for a cornbread topping. At work, Heather uses cornbread to top off a tray of pulled pork and it is delish. I decided to give it a go, especially since I had yellow cornmeal in my cabinet after the hot cereal making. It turned out alright – the cornbread was a little much for the amount of filling I had, so if I were to do this again, I would use only half as much. I loved how simple it was to pull together though!

After:
(Week 7 was missed because I let Tofer make the pulled pork and Boy the grilled meats for a summer party we threw. Week 8 was missed because it was my birthday and I let Boy make me an Angel Food Cake. Now you are caught up!)