My sister-in-law brought over some paints and water coloring books recently. Since I was little, I’ve always found watercoloring frustrating. The paper never holds up; the colors never mix right. Needless to say, it is not my forte. But, it is a fun way to pass the time, so I tried my hand at it. These came out of these two books: 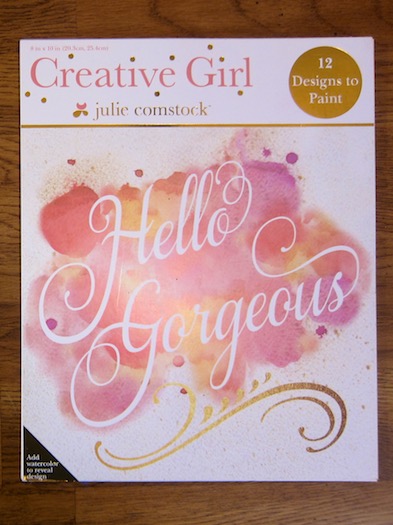 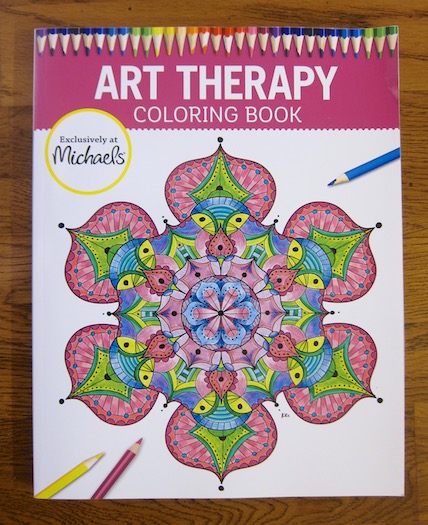 Katie made these. I especially like the splattered look! 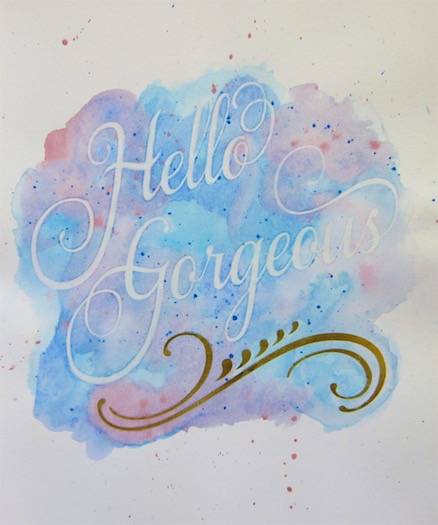 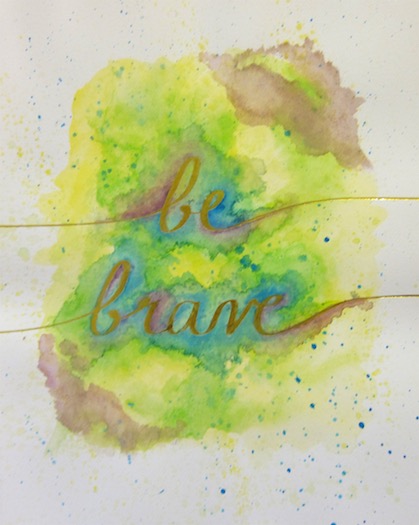 I made these two: 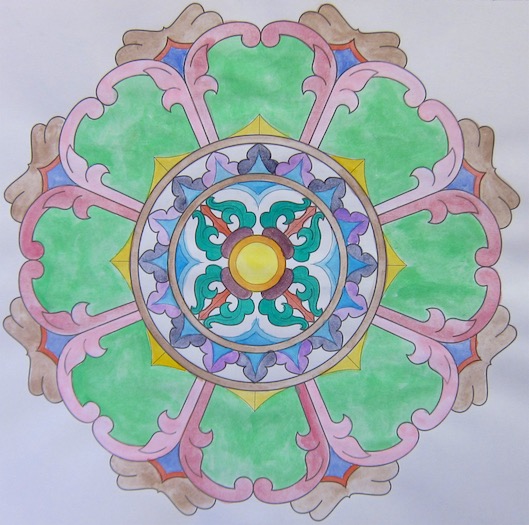 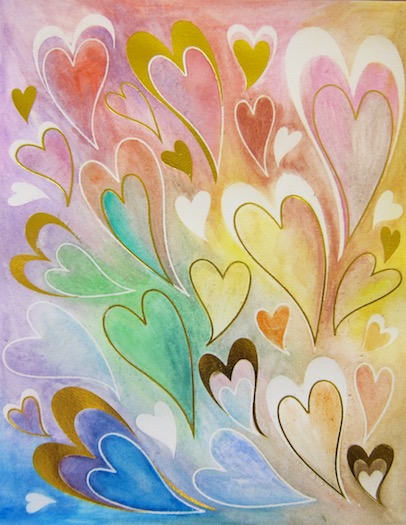 My favorite were these watercolor feathers. Outside of the lines got rather messy, so I decided to cut them out. Now, they look great on my craft wall! 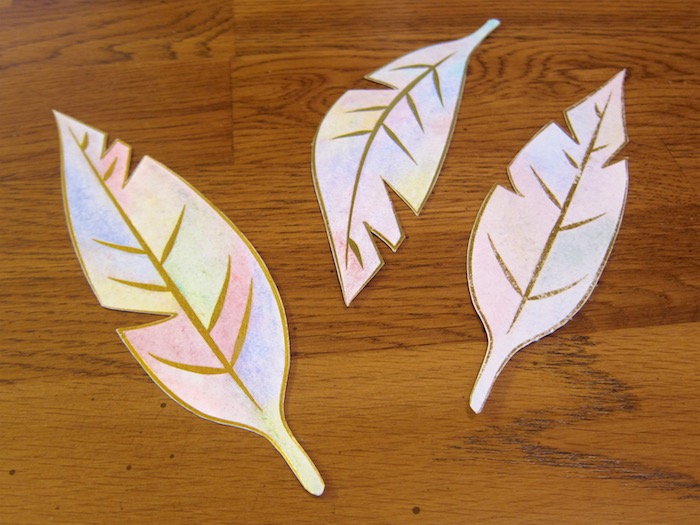 She then invited me to a Wine and Canvas event. It was very much like I expected on a cultural level except that it went too fast for me! I thought for sure that three hours would be enough but I was rushed the whole time. That’s ok – I did learn some things and had fun doing it. And I was one of the few in the slower crowd. Here’s what it was suppose to look like:

And here is me hating on my grass:

And the final (awful) result, below. I had a smear of blue along the water line, so I made a whale tail (well, I tried to). I was afraid to add birds and I didn’t quite get what she was saying about them, so I just made the little hump birds from childhood. I had more fun doing the little lighthouse and fence posts (which are my favorite) than anything else. I don’t think impressionistic is my style. I got pretty frustrated being rushed at the end (for the clouds) and time ran out so ta-da, I guess. At any rate, it’s hanging at Boy’s office now! I’d do it again, don’t let me fool you:)

A shout out goes to Carol at Rocking Chair Quilts for this post! I visited her shop as part of the 2016 Illiana Shop Hop and in her goodie bag was an Ohio star block pattern with enough fabric to make it. She told us that she selected the pattern because it was the first quilt block she had ever learned how to make – and now it is my first, too! (She also grew up in the city where I live now, just down the road from Boy’s office; small world!) 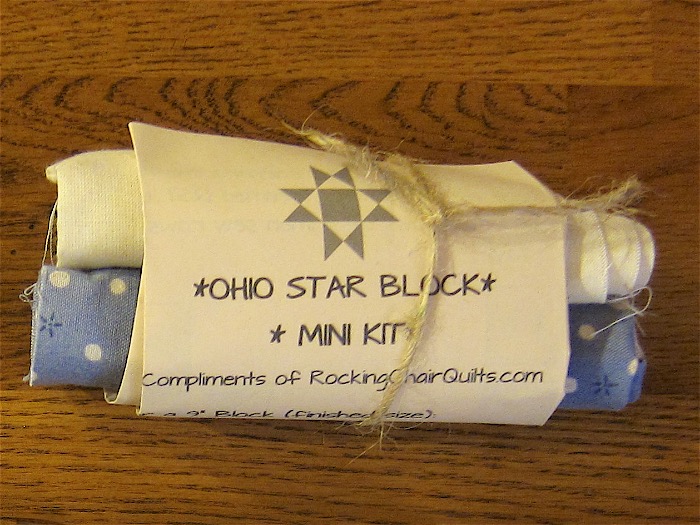 Had she not included the fabric, I doubt I would have ever made it. I learned something from that, actually, but I can’t quite place my finger on it. Maybe it means I need to buy kits? Maybe it means I don’t actually know what I like? Who knows, but I love the little snack mat! 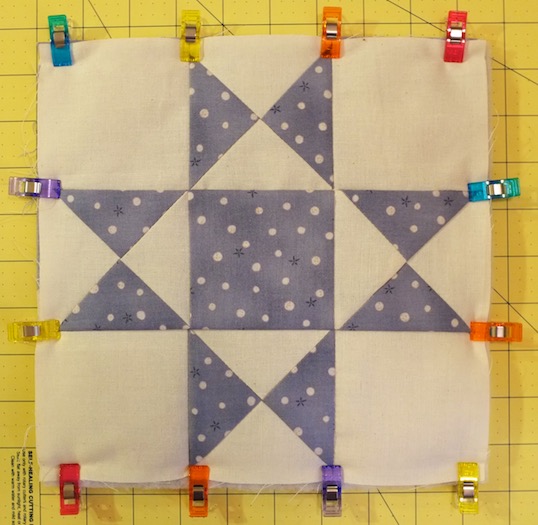 Professional quilters will see my mistakes, but for my very first one, I think I did a splendid job! And I really enjoyed being able to use my rainbow wonder clips. I happened to have had a segment of old fluffy batting so I decided to try it on this piece.

The fabric Carol gifted me was an interesting piece – I had enough to where I could have chosen to use only the blue portion, but I thought that it would be more fun to include the contrasting bit. 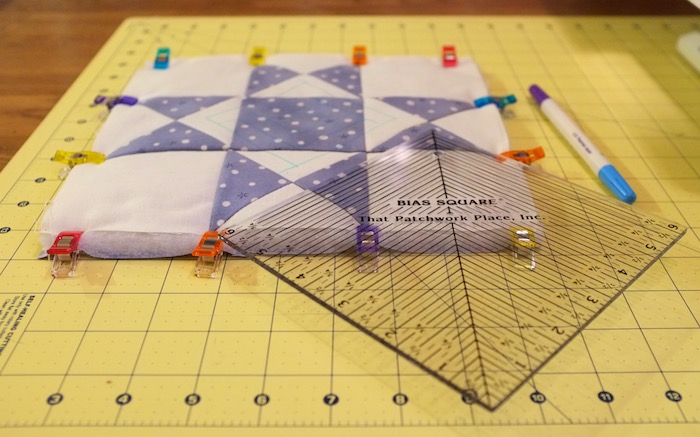 A long time ago, my quilting aunt set me up with some basic tools, such as this bias square ruler. Until this project, I had only ever used it as an additional and small straight edge. Now, I totally get it. I used the markings to draw a few nested diamonds in the center, a triangle between the blue points, and small diamonds in each of the blank corners. 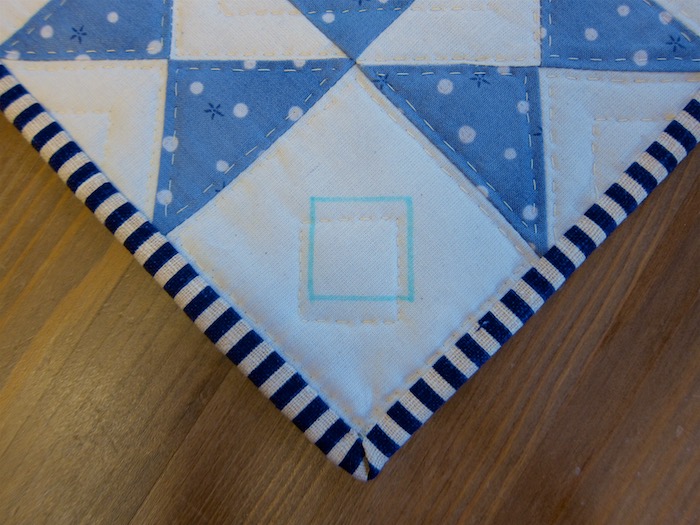 In hindsight, I wish I hadn’t cut the whole thing down to a square, because I decided to handquilt it (I have a small rectangular “hoop” that would have worked well with just the back piece being long enough). I managed with a standard hoop alright, though. But, once I put the binding on, my diamonds were no longer centered. See the type of things you learn in a small simple project? I ripped them out, and began anew. Luckily, I’ve spent some time around my gramma who handquilts, so she taught me the nifty trick of pulling knots through the fabric. Thus, I can start sewing anywhere, even after the project is complete! Honestly, I always thought you had to come up from under a raw edge. The things you learn! 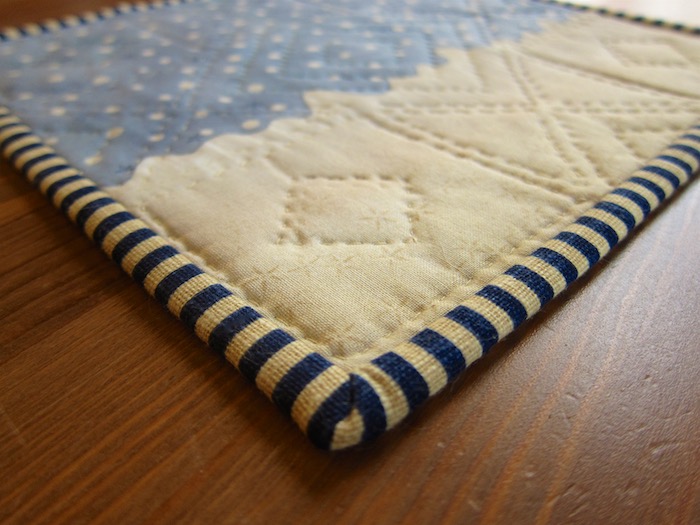 You can still kind of see where the old seams are but I expect that to fade over time. I was also a little nervous about the binding (not included with the project). I decided on stripes, and was worried they would be all wonky in the end. But, again, I surprised myself! And I want to pat myself on the back with how awesome my hidden stitches turned out. I definitely went up a level there with this project. Boy couldn’t even figure out how I had done it for a while (not until he started pulling at things, the nerd). 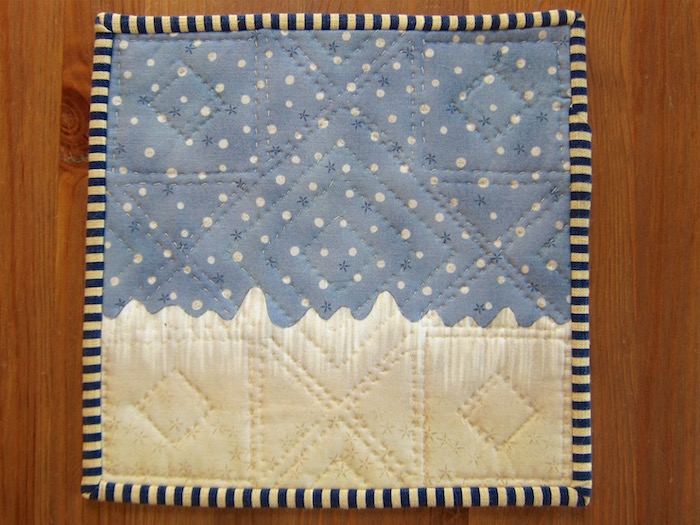 There are, of course, a few things I don’t love about it, but overall I do love it. I haven’t decided what I’ll do with it yet. I called it a snack mat earlier, but its true purpose awaits to be known. 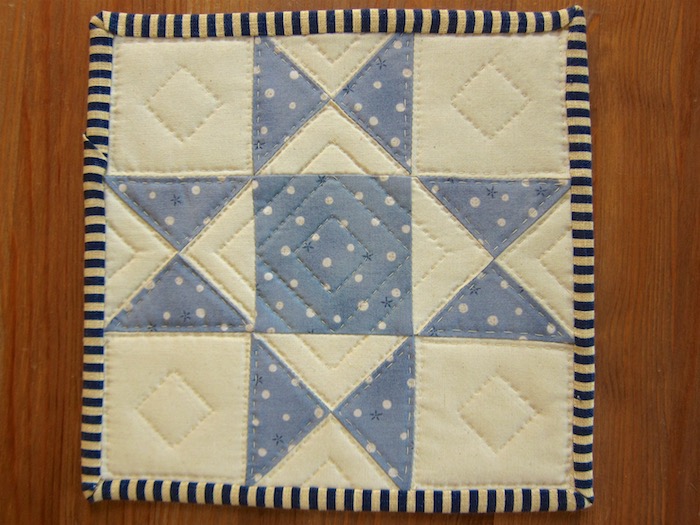 I suggest that if you have all the supplies for a project that you never thought you’d try – just do it. Even if you don’t like the end result, the experience you gain is worthy of the time spent! Happy crafting!

As mentioned before, this is a pattern I picked up from the Illiana Shop Hop. It is from Lazy Girl Designs, and I see they have many little projects. 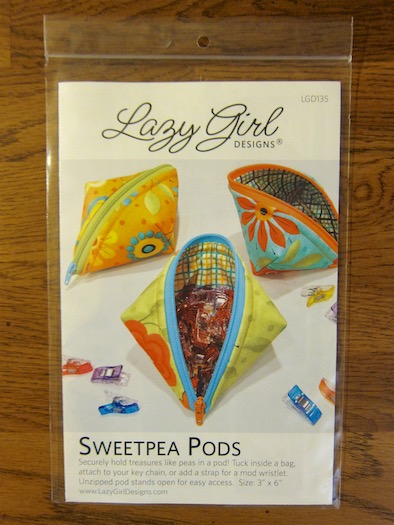 Being my first-ever zipper project, I was a little nervous – especially since the pattern says to practice! But I found it to be incredibly easy, so much so that I can actually tailor this to any size.

These are my first three; I need to find longer zippers elsewhere (and zipper pulls). None of them are the size the pattern called for – the only zipper selections at the shops were too short, so I simply cut my fabric down an inch for the first one (on the left). Then I wanted to use some of the freebie fabric I was given for the other two, and they were already pre-cut so I lost two inches on them.

The pattern does not call for a little tab, but I found that it made it more convenient to zip up so on the second pouch (middle), I added a tag to help open it. Then it dawned on me that a tag on both ends would work even better so the third (right) pouch has two. I’ll need to practice a little more with that as when I sewed everything together, the tabs aren’t perfectly centered with the zipper. I also got better at the zigzag seal for the inner seams as I went along.

Just like in the photo on the pattern, I plan to make one to hold my new wonder clips (I gave all these away already). The pouches sit wide open, making them pretty handy for reaching in and tossing things back into. I look forward to making more!