I dont think i ever mentioned that we did some gutter work. We had some trees up in there so thats all gone and I have noticed a tremendous dent in the mosquito population! Phew! 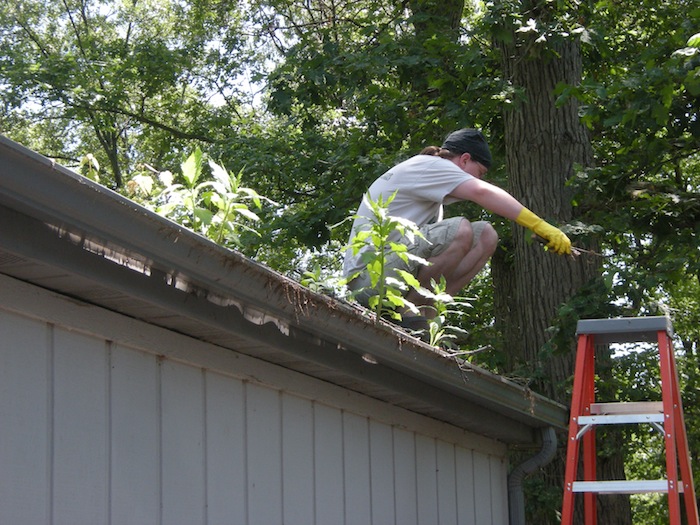 We also recently visited where I use to live and made pickles with my gramma. She had a lot picked already, but we picked some, washed them all, canned them, and are just about ready to eat them! Grammas pickles are the best – super dill (in fact, the recipe is Dilly Dill) which i cant get enough of. 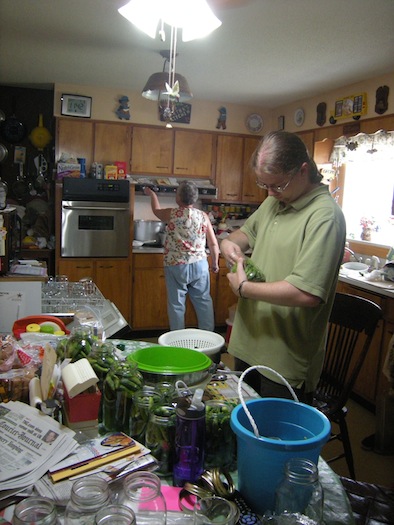 I had a super good weekend. Boy and I spent all of saturday working on the house. We installed 3 hallway lights, a ceiling fan (with light) in the wood stove room (incidentally, that room is no longer my “living room” but more of a catch-all room with a table in it), really cool track lighting in my craft closet so i can actually see in there, a water hose winder thingie on the side of the house which is awesome, and two cabinets finally hung up in the laundry room. And today, a contractor is coming over to see about the first step to remodeling the kitchen – wall removal! Sunday, i held my first Crafternoon. I dont remember where i got the idea from, but it was somewhere out there on the interweb to have a bunch of people get together and learn how to make something. I will definately post more about that shortly. To top it all off, i bought some kiwis a while back and I said to myself “where did those awesome kiwi spoon/knife things go that i use to have?” So i googled and came across the kiwi company Zespri, who sometimes has kiwis at my local store. They have “Spifes!” which they give out at events (probably local to California where they are located) and sell to retailers. I couldnt find a list of retailers to buy one from so i thought “what the heck” and emailed the marketing contact listed on the site. I explained that i wasnt a retailer but just simply a citizen looking to buy awesome spifes. Karen was so gracious to immediately ask for my addy and ship them here and they are exactly what i use to have and are as awesome as ever! Now i have SIX! Thanks Karen and Zespri:D 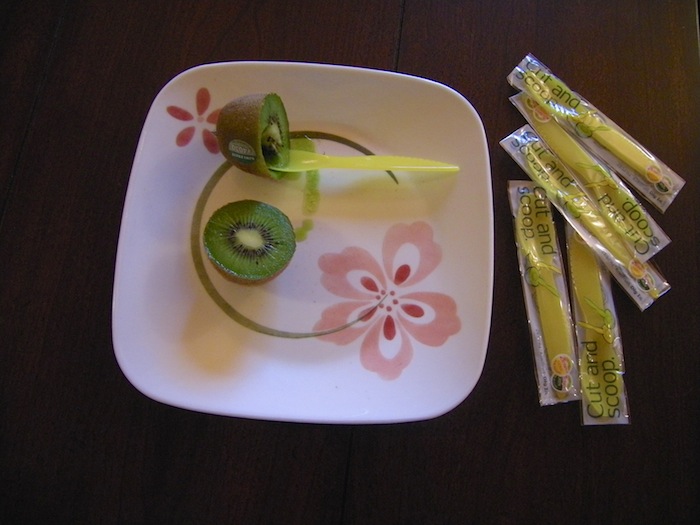 Karen also notified me of the most amazing giveaway – A trip for 4 to New Zealand! Check it out: www.thegreatkiwiadventure.com :)

This post isnt that crafty but my week has had some highlights so I thought I would share.

We’ve been pounded with severe thunderstorms for what seems like weeks now. Living in a swamp means the mosquitos are out of control. Eugh. Instead of picking up sticks, ive dragged tree branches larger than me to the burn pile. And all while this is happening, my girls are obliviously laying in awkward positions. 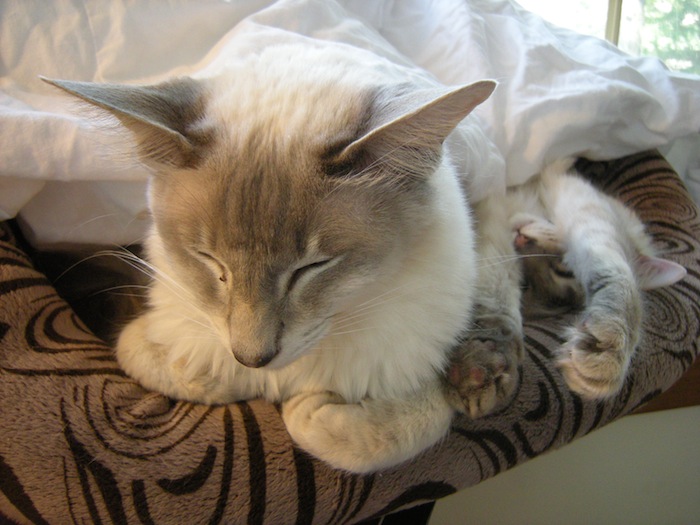 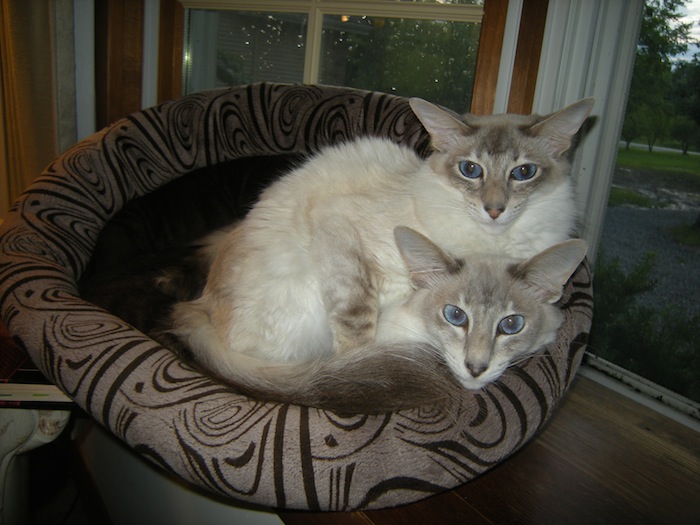 On one of the nicer days, Boy took Sasha out in the mosquito infested backyard for a morning stroll. She still drags her leash throughout the house like any well-trained dog would to let you know it is time for a walk (she can be pretty gosh darn demanding about it too!). 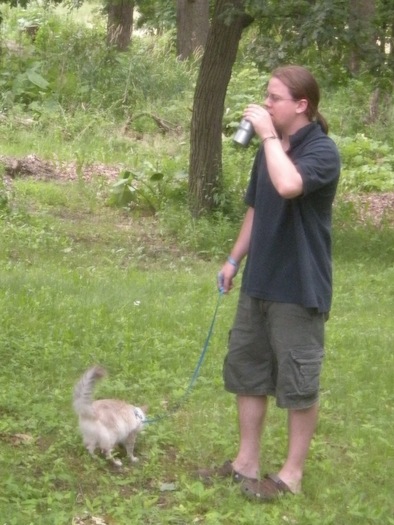 I finally beat Super Mario Bros. Wii, with all five sparkly stars and 99 lives, which means Mario plays without a hat! 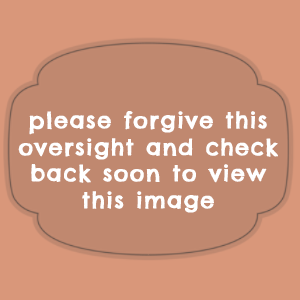 Deer have been out and about like crazy during the day (as well as those dang mosquitos!). Weve got a new raccoon in the yard – we had a big ole fat one for a while but “Mikey” got hit by a car:( Most people hate raccoons, I know, but they are super cute and really, what trouble are they? Besides eating Rupert’s cat food, that is (“Rupert” is a stray black cat who likes to wander around the house). Our trash cans are animal proof so I dunno why all the hate:P We also have a squirrel with a bald tail. He likes to greet me in the driveway every day when i leave for work. But the creatures that are also saying hello to me that look like this are not my friend: 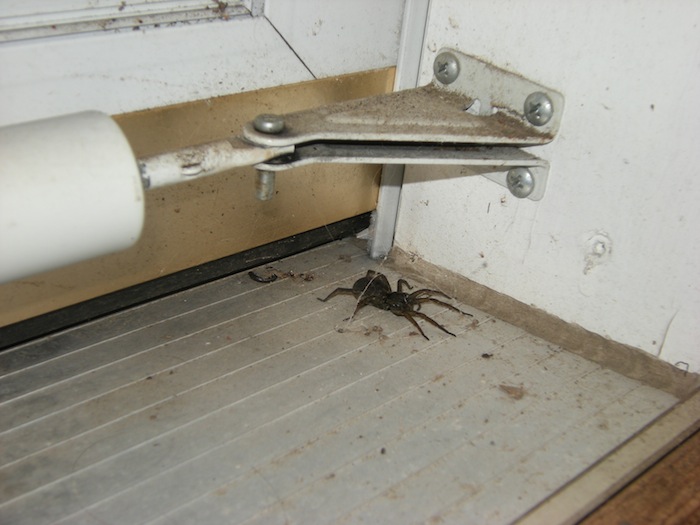 It snuck in with me last night when i was bringing in the groceries. I just knew it was following me, so that it could end up in my bed like the last one. (I did not get a photo of yet another spider in my bed, but it had a huge abdomen and reared up to fight when Boy tried to move it, and it was pretty big – about a quarter or so without the legs). Im pretty sure this is a wolf spider, based on its size and the stripe on its back, but Im not positive. Sasha discovered it when I was trying to take a better photo and it attacked her so she flung it and then it scurried away and made tinking sounds on my tile with its legs. *Disgusting*. Boy rescued us by killing it, poor thing. I would have liked to have studied it more but I guess i was being quite a girl about it…

Oh and i was going to work the other day and this car was stopped in the road. I honked a bit but she didnt move. She was waving to her friend at the old people home. Then she thought it would be a good idea to put her car in reverse. Seriously, who does that in the middle of a road?! Well i laid on my horn but she was quite deaf. I threw my car into neutral just in time for her to hit me. IDIOT. Then she drove away (to park at the old people home). It was right at work so i didnt follow her, assuming there was no damage (i got her make/model and license plate if it was more severe). I checked when I parked and there was about a 5 inch scratch on my bumper but my car has seen a lot and i know the woman didnt mean to be such an idiot, so i let it go. But she could have at least apologized.

I added a butterfly with a different piece of the lacey cloth. Up close, the butterflys body has a faint outline. Its my first experience with the dye in the thread bleeding but its not enough to bother me that much (though it did rub a bit on the white flower…) 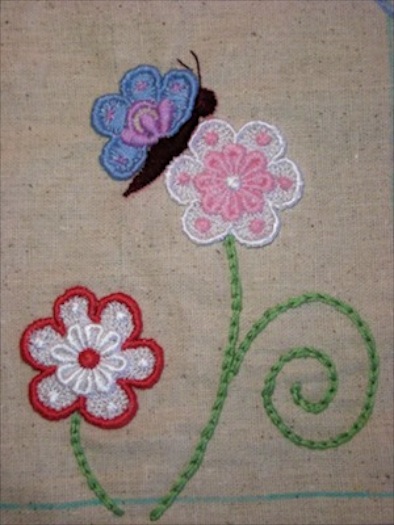