Chez is a French term that doesn’t really translate well, but chez moi means roughly “at my place” and is used sometimes in reference to dining.

(By the way, we got our kitchen handles installed! They are made by the Diamond Cabinet company and are style H38 – really cool mix of colors: dark lead, subtle copper, and a hint of champagne. Kick-plate, trim, tile, and paint to go!) We also have the tile picked out and is on order. Pictures to follow soon, I hope! 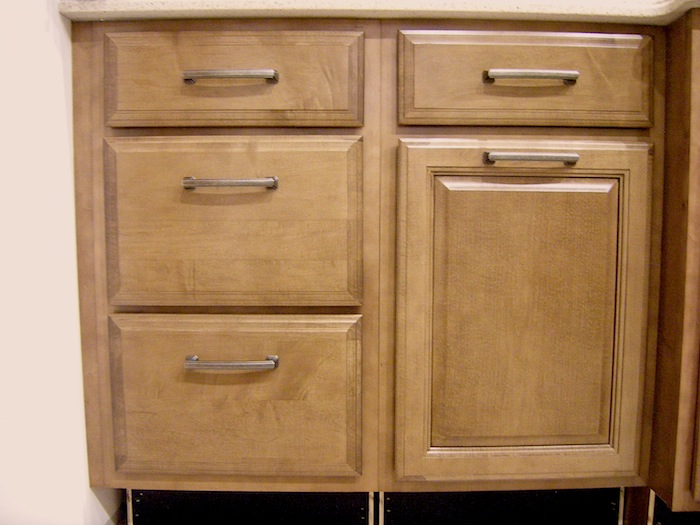 See, with my new kitchen recently available for use, I have been learning to cook. I’ve been trying to cook a dish once a week to gain some skill and eat real food (read that as not frozen, over-pre-processed, microwaveable, dehydrated “food”). I am on week 5 of this project and I am not sure how long it will last, but I will make posts of my outcomes.

I would like to add that when I was making the family tree, I watched a lot of movies that I ordinarily would not select (they were chosen specifically to not lure my interest so my crafting would reign supreme). One of them happened to be Julie & Julia. Since then, the idea of cooking has been swirling in my head. Then my friend Angela spoke of this magic she found about cooking once a month and freezing it all so that there is always food available. Good food. Check it out at Once a Month Mom. Insert some documentaries about how humans are disgusting in our waste and race to destroy the planet, coupled with some tree-hugging views my fifth grade teacher instilled in me, and I am left with the idea that all those insanely processed and individually packaged meals I’ve been eating for most of my entire life makes me one big hypocrite. Once I had thought that eventually it would be easy to reduce and reuse, much like recycling is pretty common, and I would do it then. Now I realize the naivety of those thoughts – the money isn’t in it for the companies, and with our capitalist society, well, it is up to me to make my own changes. We’ve done a few changes already, such as getting more towels to stay the use of papertowels, buying bulk containers instead of smaller ones, switching everything to efficient lightbulbs, etc etc. More ideas are on the way – recycled oil for the cars, homemade cleaners once the ones we bought are used up, homemade paper from all my scrapping scraps, compost and food garden, and so on. It is a slow process that takes mental effort, but my goal is to one day get there and stay.

But on to the food experiments! I do not have any rhyme or reason to what I’m making, I am just practicing with what the three people in my household select each week.

I used my mom’s recipe. I owed my bro some cookies for helping me redesign my website. I’ve made them twice and neither time did they set. But mom thinks I just need to boil it longer so don’t worry Bro, I haven’t forgotten about you! I claim this as 0.05 and 0.25 because real cooking hadn’t even occured to me yet. And excuse the blurry phone photo.

I used a recipe that came with the Costco canned chicken, and modified it. See, I did not have any veggies to add, so I decided to add Cream of Potato Soup to give it something. It was good, but nothing special. Very easy though! A can of this, a can of that, some worchestire sauce, cook, and eat! I claim this as 0.5 because I just made it for myself and didn’t really have the Chez Moi idea developed yet.

I picked this one out and used this recipe at All Recipes. I read the reviews and decided to let the noodles cool, and add some seasoning (garlic powder, basil, oregano, salt, and pepper). Oh, and I did not have any tofu on hand so I simply skipped that. I also smothered sauce on each one after it was rolled, and sprinkled cheese on top before baking. Then I let them cool a little before freezing them. They reheated great and tasted just as yummy as the freshly cooked ones.

If I do it over again, Boy and I were a little dissatisfied with the spinach so we may opt to leave it out or get fresh spinach instead of frozen.

Tofer selected this (the photo was his lunch for work) and I found a recipe at the Food Network. The reviews all agreed that it makes way too much sauce, but instead of cutting back, I decided we could use the leftovers for spaghetti sauce. It also called for 4 breasts, but Tofer got me 6. And then once I smashed them, they were ridiculously huge, so Boy helped me cut them in half. I ended up with 13 total peices and still had enough of all the ingredients.

I learned a TON with this recipe. I smashed chicken (and was happily reminded of pollo a plancha from Peru:), made fresh garlic paste, cut an onion, cut a pepper, pureed tomatoes, and used breadcrumbs for the first time. Now, it must be said that almost all those ingredients I just listed literally will make me sick to my stomach. So while cooking up this sauce, it was amazingly puzzling for me when it says “add to taste” considering there was no way I would taste such poison. I also had dry bay leaves instead of a fresh one, and the interwebz told me that dry only has a fraction of the flavor, but it did not tell me what that fraction actually was. In addition, I had parsley snips instead of a small bunch of parsley – how many snips makes a bunch? This I do not know. I was nervous the sauce would not be right.

I also decided it was a good idea to leave the handle of my pan over a hot burner so that I could burn my hand when I grabbed it. I called for Boy to finish it up for me by putting it all in the oven. No worries, I had an amazing recovery!

My chicken was topped with the spaghetti sauce I eat, and I loved it! Both Boy and Tofer said theirs were awesome. The sauce was a hit, and my smashed crusted chicken was super juicy with a great crunchy breading. I would totally make this again. I wish I had made more for me!

Boy chose this recipe from the Food Network again. The reviews were mixed. It seemed to be a love it or hate it type deal. I also read that some people decided to bake the eggplant instead of frying it. I decided, since it called for two gratin dishes (I used pie plates) that I would try both ways. I had never had eggplant, and I was nervous about mixing it with marinara sauce, but in the end, it was edible. I don’t know that I would ever choose to eat it though. Boy and Tofer had to reheat theirs, which is always a hit and miss, and Tofer decided he was too much of a ninny to even try it. Boy thought it was really good and ate one whole dish by himself (the baked version)- he especially liked the custard top, but the bottom he thought was a little too soggy for his tastes. Because of that, he was deterred from eating the dish that was fried and we just tossed it out.

My mom was in town so I had her watch me make them. Again, they did not set. I decided to add more oats, almost a whole cup more. While letting them rest on the counter, I googled the difference between cocao powder and cocoa powder. The logic seems to be split – some say it is exactly the same, but some say there is a difference. Those people say that cocao powder, which is what I was using to make them good for you, still has a high fat content because it hasn’t been processed to cocoa powder yet. We were discussing maybe trying again with less butter, but in actuality, the cookies, with the added oats, did set! Yippee! They are on their way to Bro as we speak. And…in this heat wave they may yet be a goopy mess when he gets them, but that’s not the point.

My friend Leslie gave me a squash and my other friend Colleen told me about how her dad makes it in the oven with brown sugar. This sounded a little gross to me, but I thought, heck why not? I got the recipe from Food.com. Boy and I made this together on a whim last night. It was scrumptious, and we ate the whole squash! Very quick and easy and I would do it again. Thanks guys! :)

I apologize for the lack of photos. Both the cookies and the squash was kind of a random moment in cooking and I was not in the mindset for blogging. I also can’t upload any images because I converted from Mac OSx to Lion and for some reason it dropped my Aperture serial number and my FTP program is not supported. Those will be fixed soon though, and I have a book cover and progress on Felt Keeley to share!